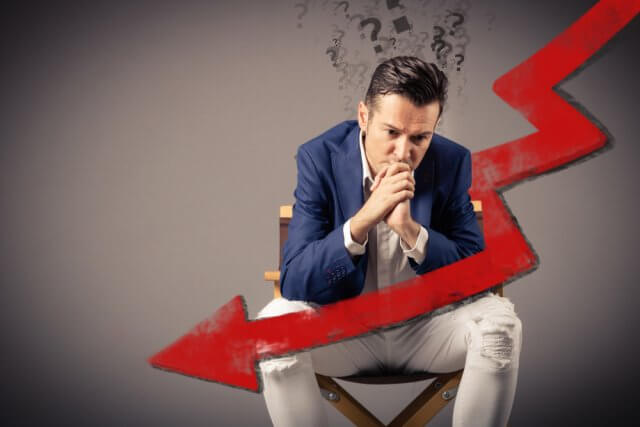 What is Youth Unemployment Rate?

Youth Unemployment Rate is the percentage share of the young labor force that is jobless. While the upper and lower limit of age categorizing youth varies across regions, the United Nations categorize people between the age of 15-24. Some countries extend the upper limit to the mid-thirties also.

Youth unemployment is a situation where young people who are actively seeking, willing, and able to work are unable to find a job. Youth unemployment rates generally tend to be higher than the adult rates in all countries across the world. Youth makes up roughly 17% of the world population, and more than 85% of them live in developing countries.

How can the Youth Unemployment Rate date be used for analysis?

Youth Unemployment is caused by many factors, the primary among them being:

The first and primary root cause of youth unemployment is the gap between the traditional education system and current market skill requirements. The current knowledge acquired through graduation, or any degree is not tailored to the disruptive technological society. With technologies changing so rapidly, the education systems should also be updated to take these changing times into account and provide relevant knowledge.

With so many laws protecting employees through labor acts and minimum wage policies, companies are pickier in hiring. Also, companies do not want to invest their earnings into new youth training for months and then reap benefits. Hence, companies are offering part-time jobs or contract hiring work that youth has no choice but to take. During economic downturns, employment protection plans protect employees and leave the contract workers vulnerable. Hence, during economic downturns and downsizing, youths are the first to be laid off.

Many countries provide income support and assistance initiatives to youth until economic conditions improve. While such programs are good or bad for the youth remains debatable, some say it creates dependence on such programs. Keeping the youth unemployed even longer through such programs will further throw them off the career track.

Unemployed youth are often referred to as the lost generation. They are called so not only for the productivity lost but also for the direct and indirect impact it has on the youth and their families. As the saying goes, “a good start is half-race won,” similarly, a lousy start is also half-race lost. Youth unemployment has said to affect earnings for twenty years.

The hierarchical structure of corporations and late employment of youth puts them on the back seat in the career race, making it very hard for them to catch up with their peers in terms of earnings, position, and skill. Since they have not been able to build up their knowledge and skill during the period of unemployment, there is a substantial decrease in lifetime earnings.

If a job is hard to find for youth, they often lower their job requirements. More often, they compromise and do jobs that they do not like, and it has an impact on their happiness, job satisfaction, and mental health. It is also reported that unemployed youth are more isolated from the community.

In modern times, political tensions and anti-social behaviors have been attributed to long periods of youth unemployment. The youth who do not have any productive work to engage in are succumbing to such anti-social activities and hooliganisms more, lately.

As more and more youth remain unemployed, benefits payment increase to accommodate the youth. Hence, more of the tax revenues are spent on providing support. Decreased spending inhibits the government from allocating funds where it is needed to assist economic growth.

As youth remains unemployed, the divergent and out-of-box ideas are missed out in the companies. Youth brings energy, dynamism, fresh perspectives onto the table with each passing generation. As innovation decreases, companies die out, thus affecting the economy in the long-run.

The Youth unemployment rate is an economic factor that affects the long-term progress of the economy more severely than the short-term. As seen, it has multi-layered negative impacts in terms of earnings on the youth and also on their families.

In the United States, the Bureau of Labor Statistics (BLS) publishes employment and unemployment statistics in their employment situation report every month. The report classifies it further based on age, sex, industry, etc. It is released on the first Friday at 8:30 AM Eastern Standard Time.

Youth Unemployment refers to unemployed persons looking for a job but cannot find the age range defined by the United Nations. This age group currently stands between 15-24 years. Youth unemployment rates tend to higher than the adult rates in almost every country. Forex traders look at general unemployment figures, which are the sum of unemployed persons across all ages and take a currency position based on the numbers. They do not consider the individual components of unemployment data as it does not provide a complete picture.

We will be analyzing be the latest youth unemployment figures of Australia and witness the change in volatility due to the news release. Looking at the below graph, we can say that youth unemployment increased in May by 2% compared to April. Even though the data is not very encouraging, let us determine the market’s reaction to this data. 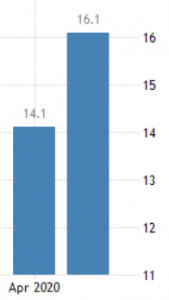 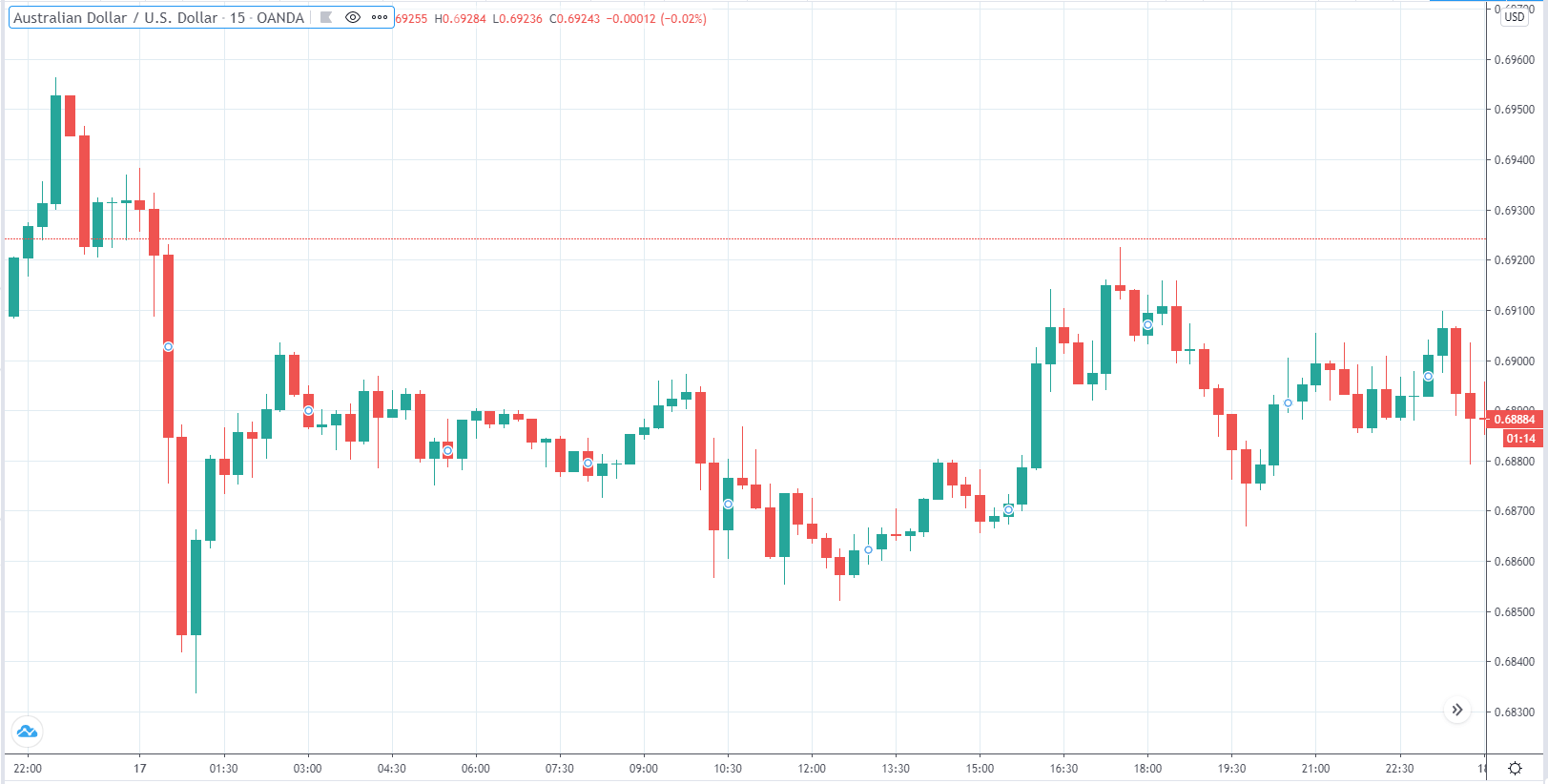 The above image shows the 15-minute timeframe AUD/USD chart before June 18, 2020. No trends have been established and shows no significant volatility. 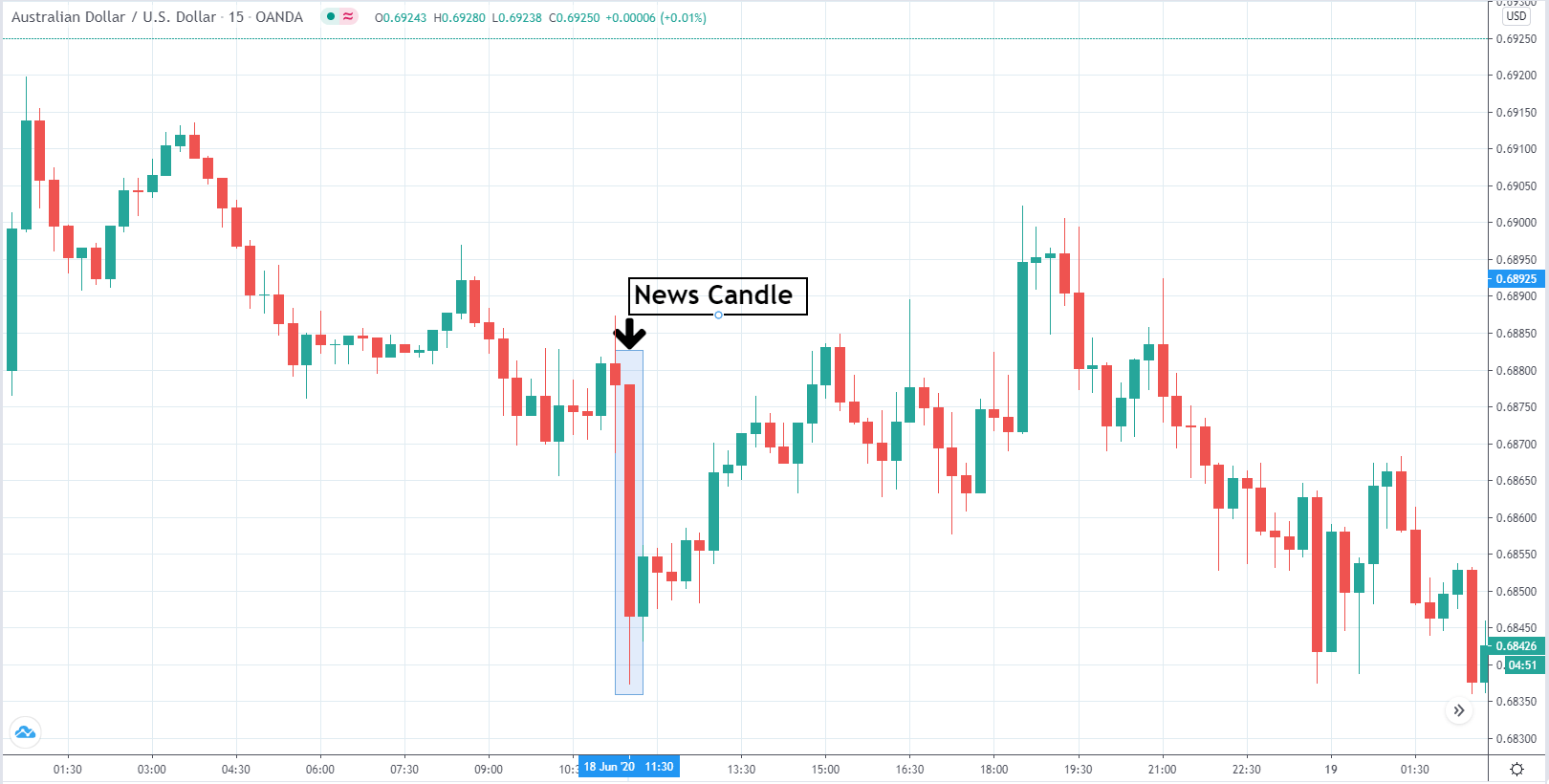 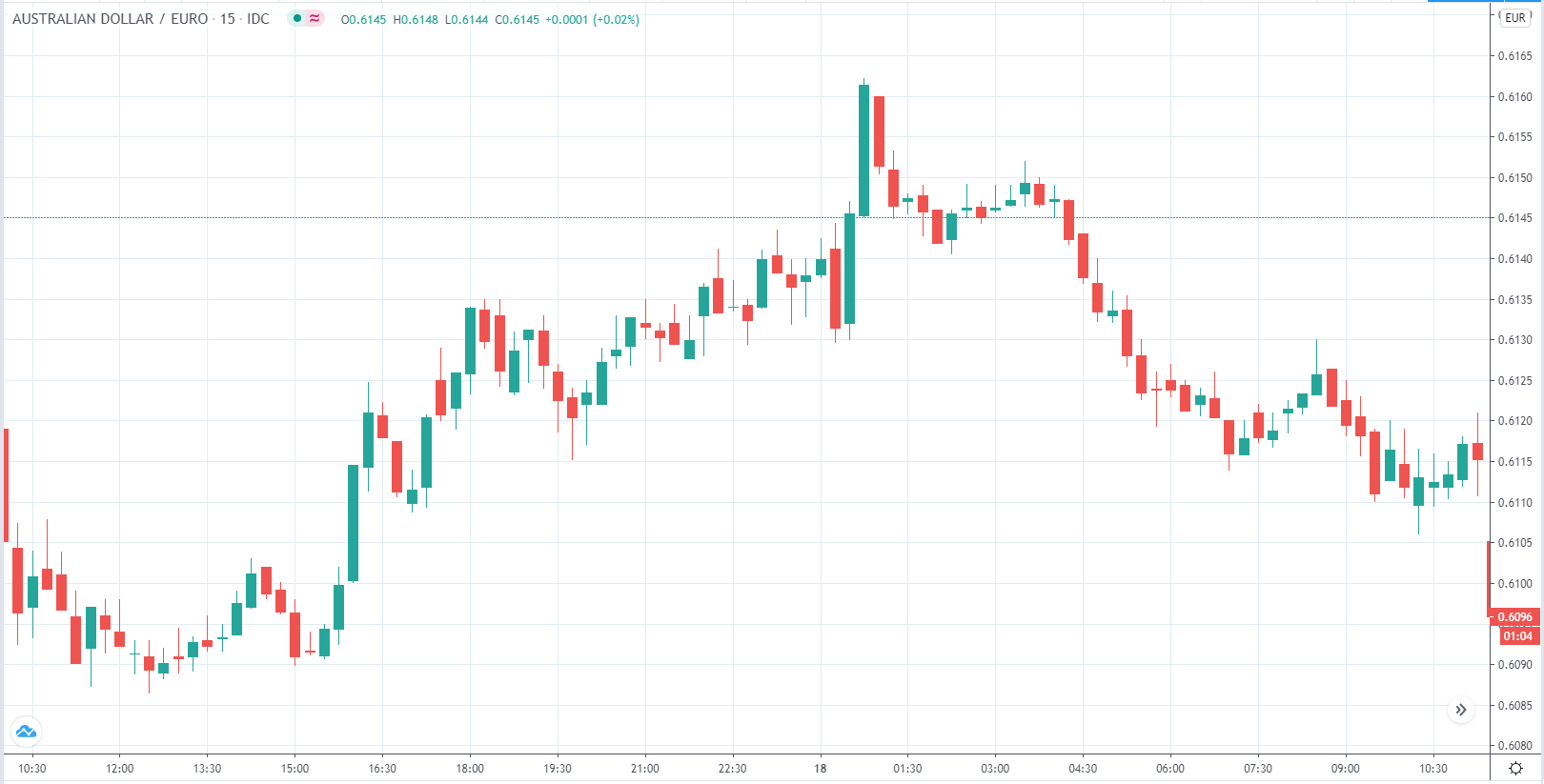 The above image shows the 15-minute timeframe of AUD/EUR pair where AUD gained momentum till June 18 but only to fall back to its previous normal by 11:00 AM. 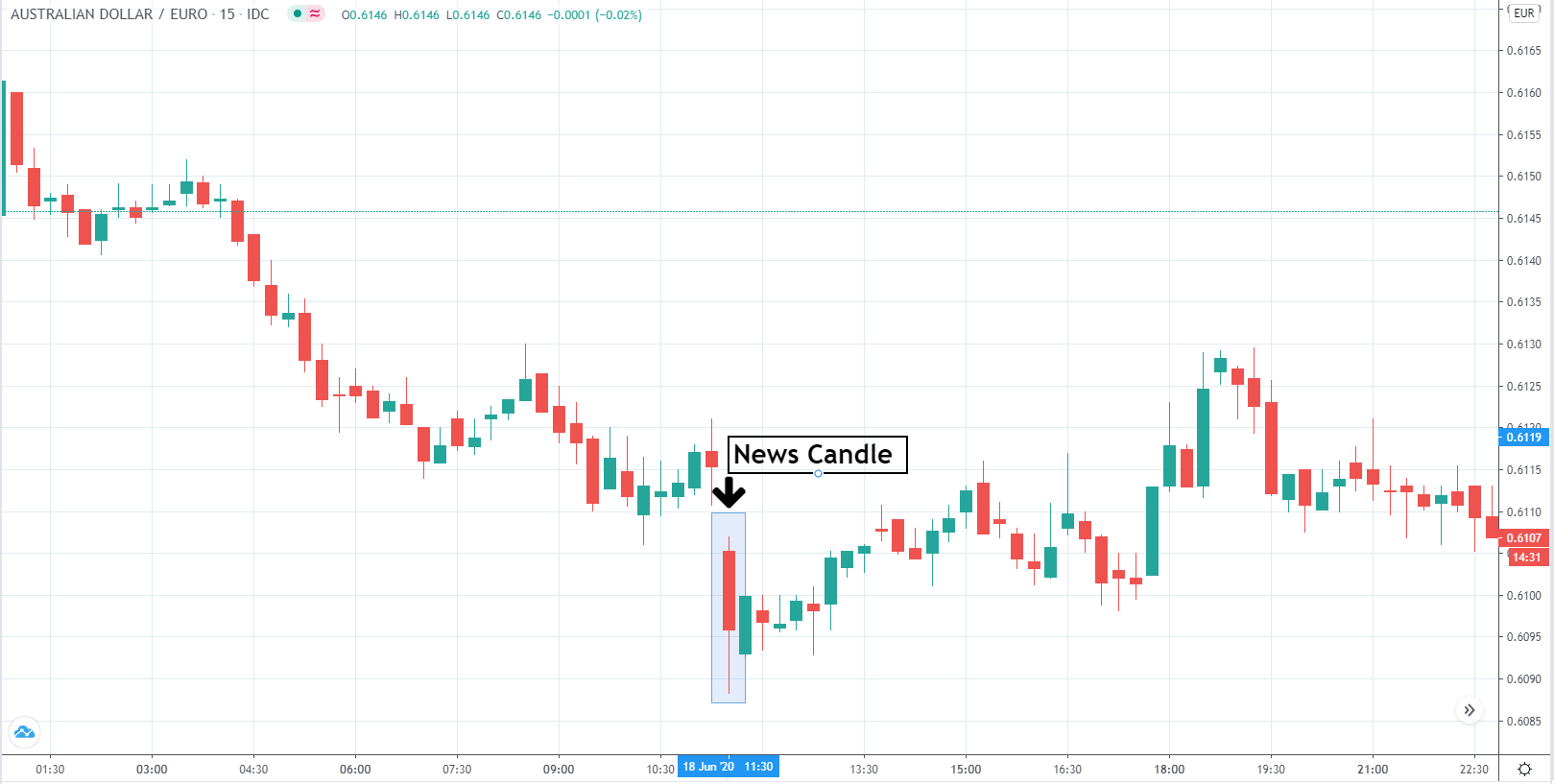 The above image highlights the news candle, where we can see the biggest bear candle with the longest down wick throughout the range. The bearish pressures from unemployment rates and employment change have helped put the selling pressure on AUD against EUR. 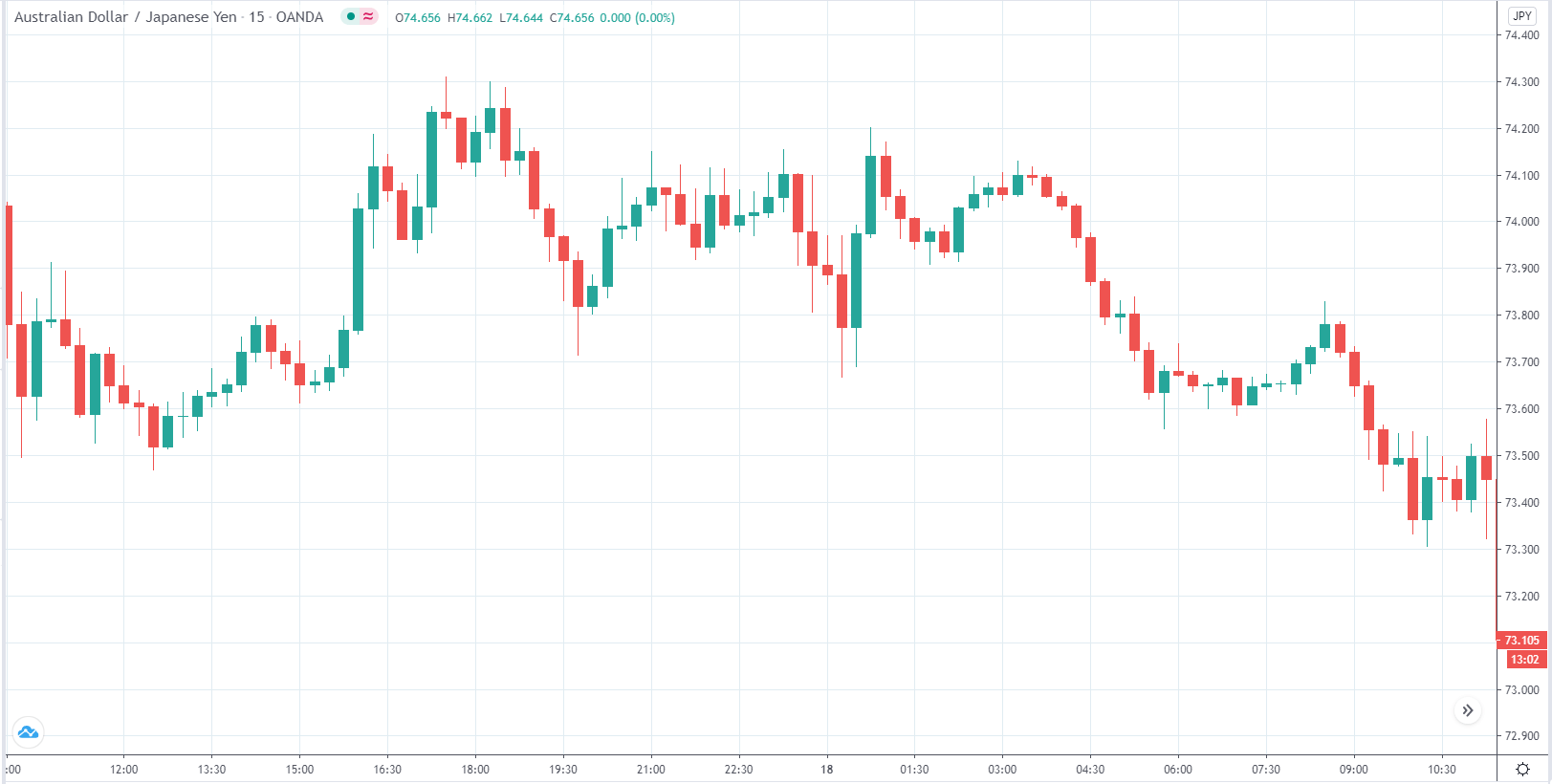 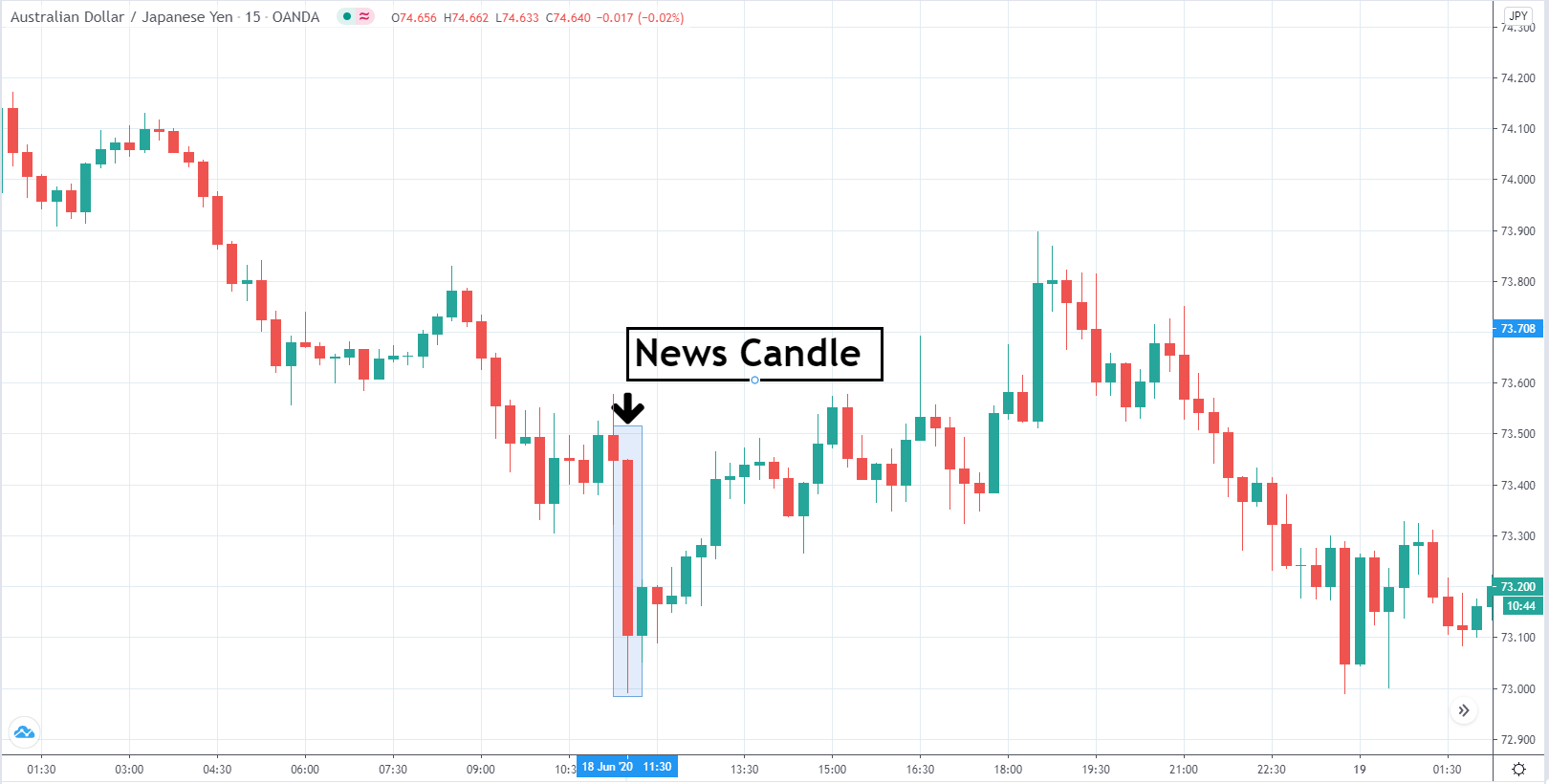 The above image highlights the news candle showing the combined effect of the youth unemployment rate, unemployment rate, and employment change. All three reports did not favor AUD, leading in the biggest bear candle with a long wick showing high sell pressure on AUD against JPY.