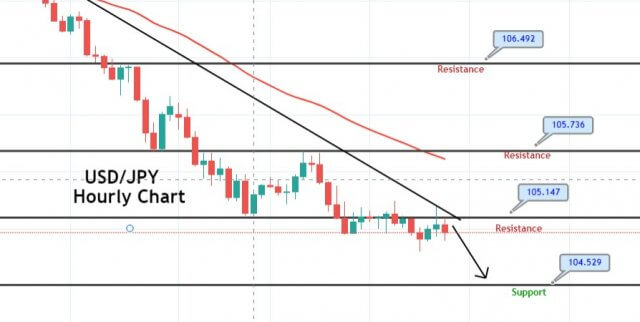 Today in the early European trading session, the USD/JPY currency pair extended its previous day bearish moves and dropped further below 105.00 level, mainly due to the broad-based U.S. dollar weakness. The worries triggered U.S. selling bias that the second wave of COVID-19 cases in the United States could ruin the recovery in the world’s biggest economy.

The U.S. Treasury bond yields also declined and weighed on the U.S. dollar. On the other hand, the concerns about intensifying US-China relations extended some additional support to the safe-haven Japanese yen, which exerted an additional burden on the currency pair. Apart from this, the (BOJ) Deputy Governor Masayoshi Amamiya commented that the central bank was prepared to ease its monetary policy exerted some pressure on JPY and extended support to the pair. At this particular time, the USD/JPY currency pair is currently trading at 104.94 and consolidating in the range between 104.81 and 105.25.

The fears that the second wave of COVID-19 cases could undermine the U.S. economic recovery still hovering all over the market and kept the U.S. dollar bulls on the defensive. As per the latest report, the number of confirmed coronavirus cases in the Arizona state increased by 2,107 to a total of 165,934, while the death toll increased to 3,408, and the current hospitalization dropped to 2,564. Apart from this state, the number of confirmed coronavirus cases in the Florida state rose to a total of 441,977, while the deaths toll rose to 6,240, and the hospitalization decreased to 9,023 according to Florida’s Department of Health statement. Almost 4 U.S. states reported records high for one-day coronavirus deaths on Tuesday. The cases in Texas passed the 400,000 marks. However, these fears have exerted significant pressure on the market trading sentiment and made the U.S. dollar weak as well.

As in result, the broad-based U.S. dollar failed to gain any positive traction on the day and reported losses as the United States crisis of virus could break hopes for a quick economic recovery, which kept the investors cautious. However, the losses in the U.S. dollar kept the currency pair bearish. Whereas, the Dollar Index, which tracks the greenback against a basket of six other currencies, was down 0.2% at 93.507.

Across the Pound, the currency pair’s losses could also be associated with Bank of Japan (BOJ) Deputy Governor Masayoshi Amamiya comments that the central bank was prepared to ease its monetary policy further without hesitation if necessary, in the face of the coronavirus pandemic. It also added, “Global economy expected to recover only if wave 2.0 stops slowly.” As well as, they cleared that Japan’s business sentiment has started to show signs of recovery after dropping to a worse level.

However, the risk-off market sentiment was further bolstered by the latest disappointment over the much-awaited fiscal package’s lack of progress. The House Speaker Nancy Pelosi and the White House Chief of Staff Mark Meadows recently ruined expectations of U.S. policymakers delivering a much-awaited fiscal package soon. He said that the Republicans and Democrats still had a difference over the stimulus. However, these uncertainties extended some additional support to the Japanese yen’s as safe-haven status.

Apart from this, the recent escalation of diplomatic tensions between the U.S. and China also exerted some downside pressure on the risk sentiment and contributed to the currency pair’s declines. Although, traders are expected to avoid placing any strong bets ahead of the highly-anticipated FOMC decision.


The USD/JPY trades with a selling bias around 104.926 level, trading within a downward channel that provides an immediate resistance at 105.120. On the lower side, the USD/JPY may find support at 104.575 level, and closing of candles below 104.575 can open further selling bias until 104. Overall the pair is forming lowers low and lowers high pattern, which signifies selling sentiment among traders. The RSI and MACD suggest selling signals; for instance, the RSI is holding below 50, and the MACD is staying below 0. Today, let’s look for selling trade below 104.858.