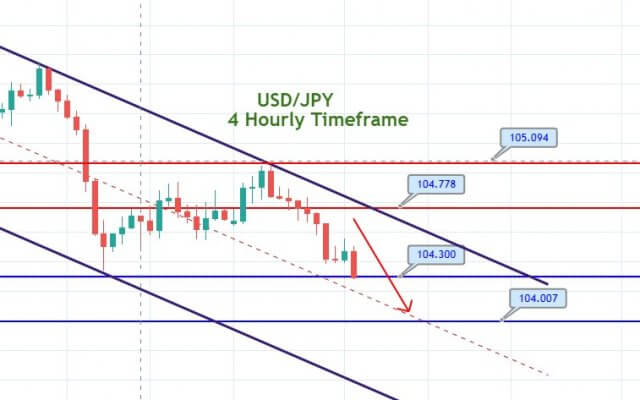 During the Europen session, the USD/JPY continues trading lower amid a downward channel at 102.298 level. The USD/JPY pair moved in a bearish direction and posted big losses on Tuesday. The USD/JPY pair was down on Tuesday amid the broad-based U.S. dollar weakness along with the rising risk-averse market sentiment on the back of fresh tensions between the U.S. and China. The safe-haven appeal was also supported by the rising number of coronavirus cases and lockdowns that drove the stock market on the downside and weighed on the USD/JPY pair as well.

The U.S. Dollar Index that measures the value of the greenback against the basket of six currencies dropped by 0.3% to 92.8 level on Tuesday that weighed on the U.S. dollar and dragged the USD/JPY pair prices.

On the coronavirus front, the United States, Russia, France, Italy, Netherland, Spain, and many other nations across the globe set a new record for the number of daily coronavirus cases. The U.S. reported more than 74,300 new cases in a single day, France reported more than 52,000 daily cases over the weekend. The global record for the infections was recorded as 43.4 million on Tuesday by the Johns Hopkins University.

The rising number of coronavirus cases urged governments to re-impose lockdown measures to curb the virus’s spread. These lockdowns in a situation where economies were still under recovery phase from the previous lockdown effects raised a high appeal for the safe-haven market sentiment in the market. The risk-averse sentiment supported the safe-haven Japanese Yen that ultimately weighed on the USD/JPY pair on Tuesday.

However, at 19:00 GMT, the C.B. Consumer Confidence for October was dropped to 100.9 from the anticipated 102.1 and weighed on the U.S. dollar that added further pressure on the USD/JPY pair. The U.S. dollar failed to cheer the positive macroeconomic data on Tuesday because of the stalled talks for the next round of the U.S. stimulus package. The stalemate between the White House and the House of Representative Speaker Nancy Pelosi over the U.S. stimulus aid package’s size led to delayed talks till November 3rd election results and weighed on the U.S. dollar.

The USD/JPY continues to extend its bearish momentum as the pair trades at the 104.298 level. On the 4 hour timeframe, the USD/JPY has formed a downward channel that’s driving bearish movement in the market, and it may support the pair around 104.300 and 104.007 area. Conversely, the continuation of an upward movement is likely to drive the buying trend until the 104.778 level. Check out the sell setup below…