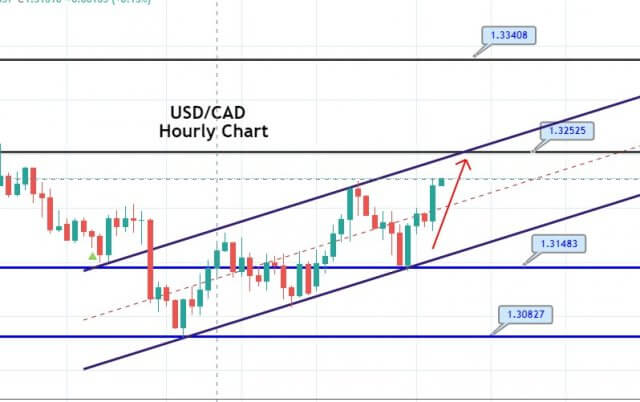 The USD/CAD pair was closed at 1.31832 after placing a high of 1.32119 and a low of 1.31420. The USD/CAD pair reversed its previous day move and fell on Tuesday to post losses. The USD/CAD pair dropped on Tuesday amid the broad-based US dollar weakness and the rising crude oil prices. However, the USD/CAD pair’s losses were recovered in the late American session after the release of American macroeconomic data and ahead of the Bank of Canada’s interest rate decision.

The USD/CAD pair failed to capitalize on the previous session’s strong positive move of around 100 pipis and started moving in the downward direction as the US dollar was weak across the board. The US Dollar Index fell to 92.8 level by 0.3% on Tuesday and weighed on the greenback that ultimately exerted pressure on the USD/CAD pair.

The US dollar was also weak because of the US political environment where chances of a blue wave in the upcoming US Presidential elections that will be held on November 3rd, were increasing as the national polls suggested.

Meanwhile, the US also reported 74,300 new coronavirus cases in a single day that also raised bars for fresh lockdowns. These depressing situations kept weighing on the US dollar that was already under pressure due to the stalled talks over the next round of the US stimulus package. As the coronavirus cases were increasing day by day and the governments were forced to impose restrictions again, economic recovery concerns raised even more as the government funding had dried up, and the talks for further measures have stalled till elections. These concerns kept the market sentiment under pressure, and the USD/CAD pair suffered due to it.

However, at 19:00 GMT, the CB Consumer Confidence for October was dropped to 100.9 from the projected 102.1 and weighed on the US dollar that added further pressure on the USD/CAD pair. The USD/CAD pair reversed its movement after the US economic data release amid the US dollar started to pick its demand as durable goods orders had recovered to their pre-pandemic levels, which was an encouraging sign.

Meanwhile, the WTI crude oil prices raised above the $39 level on Tuesday and gave strength to commodity-linked Loonie that ultimately added pressure on the USD/CAD prices and added further in the losses of pair on the day. Investors will keep a close eye on the Bank of Canada on Wednesday when the central bank will hold its monetary policy meeting. The interest rates are currently at the 0.25% level slashed in March and have not been changed until then. The rate statement could impact USD/CAD prices tomorrow as investors will be interested in the view of BoC related to the health of the economy.