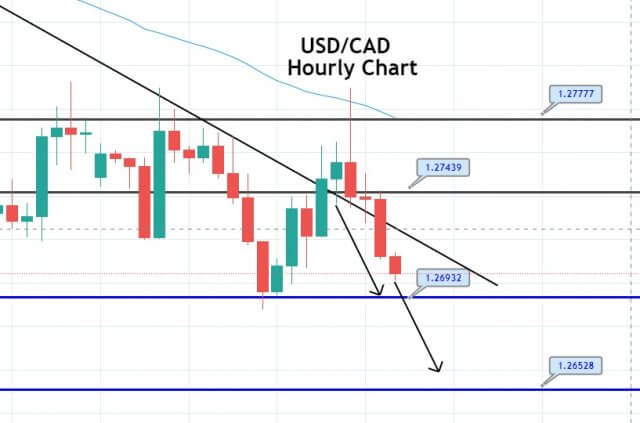 The USD/CAD pair was closed at 1.27392 after placing a high of 1.27892 and a low of 1.26931. The currency pair USD/CAD raised on Wednesday despite the weakness of the US dollar and rising crude oil prices amid the dovish comments from Governor of Bank of Canada Tiff Macklem.

On Wednesday, the US dollar was weak across the board due to the rising hopes for a further stimulus package from Congress and the dovish comments from the Federal Reserve Open Market Committee in its meeting. The bipartisan proposed that originally worth $908 billion was divided into two bills of $748 billion and $160 billion, was closer to reach a deal and get pass by Congress by the end of this week and weighed on the US dollar.

Meanwhile, on Wednesday, the Governor of Bank of Canada Tiff Macklem warned the nation’s economy that could temporarily shrink again amid the second wave of virus cases and lightened the positive mode of the market that was lifted by the vaccine news. In his last speech of the year on Tuesday, Macklem said that uncertainty persisted and new restrictions could trigger a small contraction at the start of 2021. Sometime later next year the normal activities could resume because of the rollout of vaccines.

The Foreign Securities Purchases during October in Canada were declined to 6.92B against the forecasted 10.05B and weighed heavily on the Canadian dollar and supported the gains in the USD/CAD pair. The Wholesale Sales in October surged to 1.0% against the expected 0.7% and supported the Canadian dollar. At 18:32 GMT, the Core CPI from Canada for November came in as 0.2%. The poor macroeconomic data from Canada weighed on local currency and ultimately added strength to the USD/CAD pair.

The technical side of the USD/CAD is trading at 1.2708 level, holding below an immediate resistance level of 1.2743 mark which is extended by a downward trendline. On the lower side, the next support holds around 1.2693 level and violation of this level can extend further selling until the next support area of 1.2650 level. The MACD and RSI are in support of selling while the 50 periods EMA is dispensing a strong selling bias in the Loonie. let’s consider taking a selling trade below 1.2743 level until 1.2695 level.