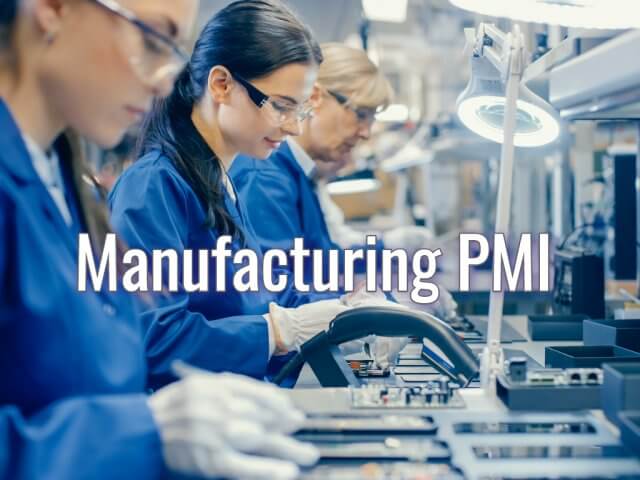 The Manufacturing Purchasing Manager’s Index is an excellent leading or advanced macroeconomic indicator, which is used widely to predict economic expansion or contractions. It has a variety of applications for investors, economists, traders alike. It is a significant indicator to predict GDP, employment, and inflation in the upcoming periods. Hence, understanding of Manufacturing PMI can be hugely beneficial for a trader’s fundamental analysis.

What is Manufacturing PMI?

Purchasing Managers in a company are the employees associated with procuring the raw materials, goods, and services that are required for running the company. For example, A car manufacturing company’s Purchasing Manager would typically be in charge of procuring nuts and bolts at the lowest or best prices from the market. The Purchasing Manager’s in this sense have a good idea of what the company requires and during what periods these requirements are set to increase or decrease.

How is the Manufacturing PMI calculated?

The Manufacturing PMI hence is a compilation of the survey answers given by the Purchasing Managers of the largest 300 manufacturing giants in the USA. The questions typically involve asked in the survey are related to month-over-month changes in the New orders, Production, Employment, Deliveries, and Inventories with equal weightage, as shown in the table below:

All the five categories, as seen when putting together, form the PMI. These five components are enough to ascertain a growth or contraction in the business activity of that company.

The Manufacturing PMI rating lies within the range of 0-100, where a score of above 50 indicates an expansion in the economic activity in the manufacturing sector, below 50 indicates contraction and 50 indicates no change in comparison to the previous month.

In the United States, the Institute for Supply Management widely known in short as ISM releases the Manufacturing Purchasing Manager’s Index every month.

The ISM, established in 1915, is a large non-profit organization in its field. The members of the ISM Business Survey Committee (BSC) receive the questionnaire each month, asking them to identify the monthly changes for each index.

The ISM releases its Manufacturing PMI on the first business day of every month. The data for the Manufacturing sector goes back to 1947.

There are other companies that also publish PMI numbers, and IHS Markit Group is one such company that puts out numbers for the companies outside of the United States. Still, within the United States, the Insitute for Supply Management’s PMI is the most popular.

How can the Manufacturing PMI be Used for Analysis?

The data of ISM Manufacturing Reports on Business or the PMI goes back to 1947 due to which the data is robust and has high levels of confidence in ascertaining economic figures like GDP, inflation and employment, etc.

The historical correlation between the real GDP and the ISM Manufacturing Data is about 85%, which is pretty good. The main advantage of studying Manufacturing PMI is that it is a leading or advanced economic indicator. It predicts the real GDP with a 12-month time lag, meaning it predicts a year ahead of time the real GDP due to which this index is widely sought after by investors.

Below is a snapshot of Manufacturing PMI plotted against the real GDP growth rate historically, and we can clearly see the healthy correlation that exists between both. This shows the importance of this leading indicator’s importance in fundamental analysis of traders. 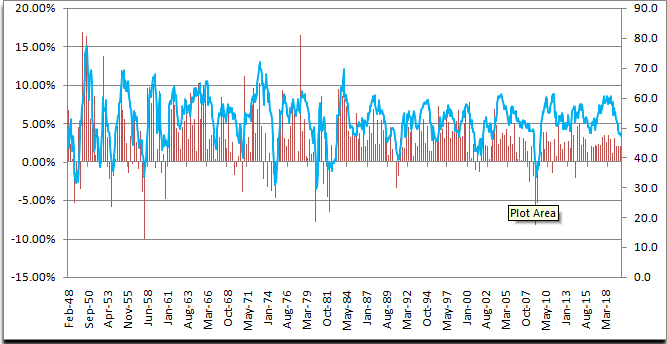 Since the United States is the largest economy, the US GDP drives the global GDP. In this sense, monitoring Manufacturing PMI gives us a good clue of the direction of the US economy and the relative direction of other economies. From this perspective, we can ascertain the currency direction also.

The further the score is away from 50 and closer towards 100, the better it is for the economy and resultantly for the currency. Higher scores translate to oncoming currency appreciation periods, while low scores would signal an oncoming recession and currency depreciation period.

A score of 85 and above is a strong signal for improving economic conditions and inflation in the economy.

Impact of the ‘Manufacturing PMI’ news release on the price charts

The Manufacturing Purchasing Manager’s Index (PMI) measures the activity of the purchasing managers in the manufacturing sector. The indicator is particularly important for the manufacturing industry, which measures the growth of that sector; this eventually contributes to the growth of the economy. Therefore, the index has a direct and indirect effect on the economy. When speaking about the impact on the currency, the indicator does not cause a drastic change in volatility, but we do witness some positions being build up in the currency during the announcement.

In this section, we will be analyzing the latest Japanese Manufacturing PMI which was released in the month of March. The below image shows the previous and actual PMI data, where we see an increase in PMI from before. A higher than before PMI reading is considered to be bullish for the currency, while a lower PMI than before is taken to be negative. Let us view the reaction of the market in this case.

We start our analysis with the AUD/JPY currency pair, and as we can see in the above chart, the market is in an uptrend pointing towards weakness in the Japanese Yen. One of the reasons is that the market is expecting a subdued PMI data this time which is making the pair go higher. The only way to trade this pair is if the PMI data of Japan comes out to be very positive, which could result in a reversal and strength in the Japanese Yen. However, if the data proves to be negative, we cannot join the trend until we get a retracement.

After the PMI numbers are announced, we see a sudden surge in volatility on the upside as the data was negative for the Japanese economy. As the numbers were disappointing, traders sold the Japanese Yen and took the price higher. A strong bullish candle shows the impact of PMI data on the currency pair. From a trading point of view, one cannot enter the market for a ‘buy’ soon after the news release. By doing this, he would be chasing the market, which is against the principles of risk management.

The above images represent the NZD/JPY currency pair, which again is in a strong uptrend, but the up move is not as aggressive as in the case of the AUD/JPY currency pair. Just before the news announcement, the price appears to be at the ‘resistance’ area, which means if the PMI data comes out to be negative for the economy, we can see a breakout on the upside or if the data is positive, it could result in a short-term reversal.

After the PMI data is released, volatility expands on the higher side, and later the candle closes with a wick. This wick is a result of selling witnessed at ‘resistance.’ Therefore, the Manufacturing PMI data has a similar effect on the currency pair. We can trade the above pair after the price retraces to the resistance turned support area and then going ‘long’ with a strict stop loss.

In the USD/JPY currency pair, the characteristics of the chart seem to be different from the above-discussed pairs. Here, the Japanese Yen is showing signs of strength before the news announcement. Thus, a positive PMI data should take the currency lower while negative data might result in an up move. The volatility is seen on both sides of the market. Thus, it is advised to wait for the actual data before taking any action. It is also not advisable to trade in the ‘options’ segment as it is a less impactful event and volatility after the announcement will be ‘low.’

After the announcement is made, the market goes up just by a little, signifying the least amount of volatility. The Manufacturing PMI, even though it was negative for the Japanese economy, it failed to take the price higher as in other pairs, as the impact of it very less. Thus, the small rise in price could be used as an opportunity to join the downtrend.

That’s about ‘Manufacturing PMI’ and its impact on the Forex market after its news release. If you have any questions, please let us know in the comments below. Good luck!