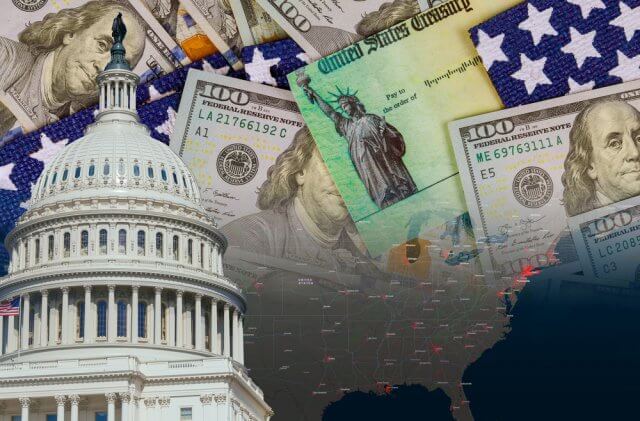 Government Revenue is one half of the Government Budget that will shape the economic growth for the fiscal year. It is closely watched statistic by traders and investors to analyze the policy maker’s behavioral trends, actions, and corresponding economic consequences for the current fiscal year.

What is Government Revenue?

Government revenue is the money received from tax receipts and other non-tax sources by a government that allows the Government to maintain the economy, finance its functions, and undertake government expenditures. The Federal Government receives income through a variety of sources which are as follows:

Taxes are the most important source of Government revenue, with various forms of tax income coming to the Government. The personal individual income tax makes a significant part of the tax revenue of the Government. Other forms of tax like business or corporate tax, consumption tax, value-added land tax, tax on city maintenance and constructions, enterprise income tax, resource tax, etc. are other forms in which the Government collects taxes. Taxes are a compulsory payment from the consumers and businesses of the economy without any quid pro quo (i.e., getting nothing in return for tax payments from the Government).

These refer to local taxations. The rates are usually proportional to the rentable value of a business or domestic properties. It can take the form of Government-owned lands and buildings leased out for businesses or organizations.

These are the income the Government receives for its services. These could include services like public schools, insurance, etc.

These are the payments received for authorizing permission or privilege. For example, issuing a building permit, or driving license, etc.

This is not intended to generate revenue but to make the public adhere to the law. Examples would include parking tickets or speeding tickets.

These are the donations received from non-government members of the country and form a small portion of the Government’s revenue. These are usually received to help the Government during wars or emergencies.

This is the least preferred way to raise capital. The Government can borrow from investors in the form of bonds to finance its operations, and this method, although prevalent, is not preferable.

Below is a snapshot of the Federal Government’s Revenue from various sources: 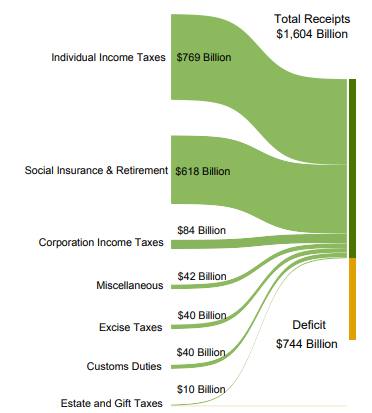 How can the Government Revenues numbers be used for analysis?

The amount the Government receives in revenues determines how much it can spend. The revenue generated is directly correlated to the GDP. The GDP is directly influenced by how much the Government spends on the economy to spur growth. Both are linked in a feedback loop. By effectively drafting out the Federal Policy for a fiscal year, the Government can increase or decrease their tax revenues.

When the Government increases tax revenues, it may receive more than its fiscal expenditures, but that would burden the consumers and business. When taxes are increased, it leaves less money for people to spend, and people prefer to save than invest. It slows down the economy, and correspondingly a deflationary environment begins to start, and the economy risks going into a stagnation or worse a recession. During these times, the GDP will fall, and correspondingly the next fiscal year’s revenue would decline.

When the Government cuts back on taxes levied, the revenue decreases for the Government, but consumers and businesses would have more disposable income on their hand, which would encourage spending and thus stimulating the economy. It would keep the GDP growth positive and maintain a reasonable inflation rate. Consequently, this leaves little room for Government expenditures. When the expenditure is low, the stimulus is low, which results in a slowdown in the economic activity in the next business cycle.

Hence, Government Revenue and Government Expenditure both are two levers that have to be carefully adjusted to achieve an optimal balance for the healthy functioning of the economy. Too much spending with little revenue results in deficits that piles up debt burden in the long run. Too much revenue with little spending slows down the economy.

In recent times, most of the developed economies’ Governments have been failing to maintain steady growth without low tax and increased spending that has resulted in substantial deficits for the Government. Hence, monitoring Government revenue and its corresponding expenditures in the fiscal policy has become essential for traders and investors in the recent times, as the deficits increase Sovereign Credit Risk (defaulting on debt), or threaten the economy into a recession.

In an ideal situation, where a Government has zero debt and has a balanced budget (taxes and spending equal) would contribute to a steady and stable economy. An increase in tax revenues would indicate high GDP prints indicating a growing economy.

More importantly, Government Revenue is half of the equation, what the Government spends on is the second half. It is, therefore, beneficial to keep both figures in consideration to assess economic growth in the near term.

For the United States, the Treasury Department releases monthly and annual reports on its official website. The treasury statements detailing the Fiscal Policy containing Government revenue and expenditures are released at 2:00 PM on the 8th business day every month. The World Bank also maintains the annual Government Revenue and Spending data on its official website, which is easily accessible.

United States Monthly Fiscal Policy statements can be found below.

We can find Government Revenues for the OECD countries below.

Impact of the ‘Government Revenues’ news release on the price charts

After getting a clear understanding of the Government Revenue economic indicator, we will now extend our discussion and find the impact it makes on various currency pairs. The revenue of a government is used for multiple reasons, that directly or indirectly facilitates the growth of the country. Revenue is basically the amount of money that is brought into the Government’s kitty through various activities.

These revenues are received from taxation, fees, fines, inter-government grants or transfers, security sales, resource rights, as well as any other sales that are made. However, investors believe that the data does not have a major impact on the currency and is not of great value when it comes to fundamental analysis.

Today, we will be analyzing the impact of Government Revenue data of Brazil on the Brazilian Real. We can see in the snapshot below that the Brazilian Government received less revenue in the month of March compared to its previous month. A higher than expected reading should be taken as positive for the currency while a lower than expected reading is taken as negative. Let us find out the reaction of the market.

Note: The Brazilian Real is an illiquid currency, and hence there will be lesser price movement on charts.

We shall start with the USD/BRL currency pair to examine the change in volatility due to the announcement. The above image shows the characteristics of the chart before the news announcement, where we see that the market is in a strong uptrend with gap ups every subsequent day. This means the Brazilian Real is extremely weak, and there is no price retracement until now. Technically, we will be looking to buy this currency pair after the price retraces to a key ‘support’ or ‘demand’ level.

After the news announcement, the market moves higher and volatility expands on the upside. The Brazilian Real weakened further as a result of weak Government Revenues data where there was a reduction in net revenues for the current month. Traders bought U.S. dollars after the news release, which took the price much higher. The bullish ‘news candle’ is an indication of the continuation of the trend, but still, we need to wait for a retracement to enter the market.

The above images represent the EUR/BRL currency pair that shows the state of the chart before and after the announcement. In the first image, it is clear that the market is again in a strong uptrend, and the price has recently broken out of the ‘range.’ Since the market is violently moving up, we should wait for the price to pull back near a ‘support’ area so that we can join the trend. We should never be chasing the market.

After the news announcement, the market reacts positively to the news data, and the price closes as a bullish candle. The increase in the volatility to the upside is a consequence of the poor Government Revenue data, where the Government collected lesser revenue in that month. The news release has a fair amount of impact on the pair that essentially weakened the currency further.

The above images are that of the BRL/JPY currency pair, where we see that the market is a strong downtrend before the news announcement and is currently at its lowest point. Since the Brazilian Real is on the left-hand side of the pair, a down-trending market signifies a great amount of weakness in the currency. We need to wait for the price retracement to a ‘resistance’ area so we can take a ‘short’ trade.

After the news announcement, the volatility expands on the downside, and the market moves further down. The ‘news candle’ closes with signs of bearishness, and later too, the price continues to move lower. This was the impact of the news on this pair. We should wait for the price to retrace to join the downtrend.

That’s about ‘Government Revenues’ and its impact on the Forex market after its news release. If you have any questions, please let us know in the comments below. Good luck!