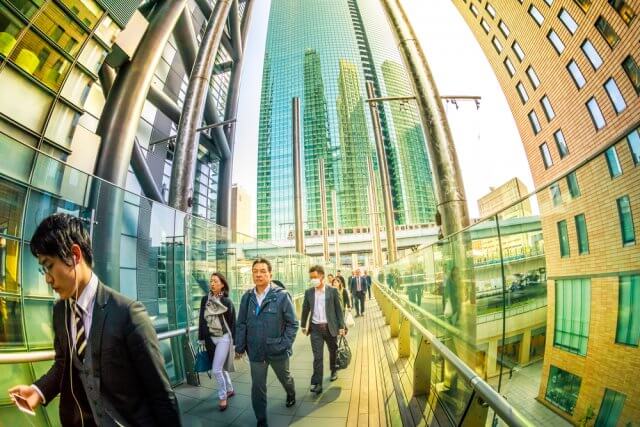 It has long been posited that in any economy, the first people to experience growth or contraction are those who provide basic-everyday services to the households. These service providers are considered to be “in touch” with the realities of the economy since they directly interact with their customers. While most people do not pay close attention to this index, its fluctuations could provide valuable insights into the economy.

For this analysis, we will focus on the Japanese Economy Watchers Current Index. This index attempts to measure the present economic conditions in Japan, especially from the perspective of households. From its name ‘economy watchers,’ it directly measures the mood of businesses who are in constant touch with the final consumers.

The index is compiled by surveying about 2050 employees in every sector of the economy. Here is the list of the sectors surveyed in the economy.

In all the above sectors, the data is compiled as per the regions in which it was collected. It is to say that the survey is divided based on the area being surveyed in japan. It covers the 11 regions in Japan.

The people who are surveyed are well-placed in positions that enable them to observe first-hand the changes in economic activities. These are the questions that the survey asks.

Let’s think of the factors that drive an increase in consumer demand. The primary factor is the increase in money supply in the economy, which is driven by easy access to cheap finance or an increase in the employment rate. Here, consumers have increased disposable income, which means that the economy is expanding.

Conversely, when the Economic Watchers Current Index is decreasing and showing increased pessimism, it could mean that the economy is contracting. Let’s use the example of household activity related sectors. When they are pessimistic, it means that they are experiencing a shortfall in demand for their goods and services. Since we have established that household demand drives these sectors, a decrease in demand could mean that households are cutting back on their expenditures.

This reduction in consumption is a direct consequence of lower disposable income in the economy. When households have reduced disposable income, they will prioritise expenditure on only the most essential goods and services. It means that consumer discretionary industries will take a hit, as will the overall economy – GDP will fall as the economy contracts.

Observe in the graphs below that the fall in the Japanese Economy Watchers Current Index corresponds to the drop in Japanese GDP in Q1 2020.

Impact of the Japanese Economy Watchers Current Index on the JPY

We have seen that the Economy Watchers Current Index can directly be linked to the money supply in the economy.; which means it can also be used as a leading indicator of inflation.

When the Economy Watchers Current Index is continually rising, it can be taken as a sign that there is increasingly more money supply in the economy. In this case, governments and central banks might step in to implement contractionary policies like hiking interest rates. In the forex market, this will increase the value of JPY. Conversely, when the Economy Watchers Current Index steadily drops, it might trigger expansionary policies, which will make the JPY depreciate.

The Cabinet Office of Japan is responsible for the survey and publication of the Japanese Economy Watchers Current Index. In-depth and historical data is also available at Trading Economics.

The recent publication from the Cabinet Office of Japan was on October 8, 2020, at 2.00 PM JST. The release is available at Investing.com. The publication of the Japanese Economy Watchers Current Index is expected to have a low impact on the JPY.

Let’s find out how this release impacted the JPY.

The AUD/JPY pair was trading in a weak uptrend before the publications of the Japanese Economy Watchers Current Index. The 20-period MA was merely slightly rising with candles forming just above it.

The pair formed a 5-minute “Doji” candles immediately after the publications of the index. Since the index showed pessimism in the Japanese economy, the JPY is expected to be weaker compared to the AUD. As expected, the pair subsequently traded in a renewed uptrend with the 20-period MA steeply rising and candles forming further above it.

The article has shown the importance of the Economy Watchers Current Index in the Japanese economy. More so, the significance of the index has been evidenced by the price chart analysis. Note that although the index is usually a low-impact indicator. However, its significance is observed in the current coronavirus pandemic since it can be used as a leading indicator of economic recovery.