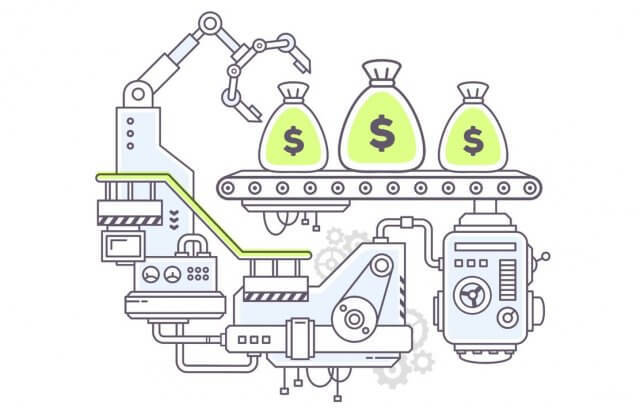 GDP from Manufacturing is significant for many developing economies. It is their primary driver for economic growth to improve the standard of living and generate wealth. Manufacturing Sector has supported a large share of jobs in the economy.

Manufacturing Sector has helped many economies to come out of underdeveloped status to developing nation status. Hence, understanding GDP from Manufacturing has varying significance in different countries is suitable for macroeconomic view in the international markets.

What is the GDP from Manufacturing?

GDP is a basic measure of a country’s total economic output. It is the total monetary value of all the goods and services produced within the country regardless of citizenship (resident or foreign national).

It is the market value of all the finished goods and services within a nation’s geographical borders for a given period. The period is generally a quarter (3 months) or a year. The commonly used term “size of the economy” refers to this economic indicator. The USA has the world’s largest economy, and it means it has the highest nominal GDP or highest economic output.

It is producing goods for use or sale labor, processing equipment, or machinery. It is a process that could be physical, chemical, or mechanical. The manufacturing sector mainly uses raw materials to make finished goods for consumption by end customers or intermediate goods for other manufacturing industries. For example, a car Manufacturing company could import raw iron ore metal, and process it to produce metal car body parts.

How can the GDP from Manufacturing numbers be used for analysis?

The industrialization has been the main propellent for economic growth in these countries that put them back on the map. With export-led growth, China has primarily used Manufacturing Sectors to achieve growth rates of 10% and above to catch up with the advanced economies like the United Kingdom, and the United States. Manufacturing Sector is a labor-intensive sector, and it requires skilled labor. Despite the advent of modern technologies, equipment, and automated machinery, it still requires skilled laborers to fill the gaps.

Developing economies do not have a competitive edge over the developed economies in the services sector. But they do have the advantage in the Manufacturing and Industrial Sectors due to the availability of cheap labor. The low costs associated with a low standard of living and maintenance attracts business to establish their production centers in such countries. For example, an autoworker in Detroit makes 58 dollars an hour compared to 8 dollars in Mexico.

As the countries develop, they start to get involved in the Service sector by investing the wealth generated from the Manufacturing Sector to come on par with developed economies and establish a total equilibrium. But there is a long way to go before all developing economies become developed.

As established, the Manufacturing Sector is a significant contributor to economic growth for developing economies. Hence, changes in this sector widely affect the overall economic health, and all the dependent industries therein. It is a proportional and lagging indicator. Higher GDP from Manufacturing is good for the economy and its currency, and vice-versa.

In the full report, we can extract the GDP from Manufacturing figures. We can also go through GDP by Industry to get the Manufacturing Industry performance in the report. The World Bank actively maintains track of GDP by Sector figures of most countries on its official website.

Sources of GDP from Manufacturing

For the United States, the BEA reports are available below:

World Bank also maintains the Manufacturing Sector’s contribution as a percentage of GDP on its official website, as given below for reference. ‘GDP From Manufacturing’ of various economies can be found here.

The manufacturing sector is crucial for the development of a country. The growth of machinery output and technological improvements are the main drivers of economic growth. The service sector, too, is dependent on most of the manufactured goods. Manufacturing also revives the economy by creating tens of millions of new jobs, eradicating recession.

For example, we will be analyzing the influence of GDP on various currency pairs and see the impact it makes on the value of a currency. The below image displays the previous and latest GDP in the United Kingdom released in May, where we see a significant drop in the GDP compared to the previous month. Let us find out if the market reacts positively or negatively to the news release.

We shall start our analysis with the GBP/USD currency pair, where the above image shows the properties of the pair before the news announcement. We can see in the above image that the market is in a downtrend, and recently the price has been moving within a ‘range.’ Since the GDP announcement is a high impact event, we should wait for the news release to clarify the direction of the market.

After the news announcement, we witness a slight amount of volatility in the currency pair where the price initially goes up, and later it closes with a wick on the top. We do not observe the kind of impact that was expected due to the news release may be because the market had already priced in a negative outlook. Since the impact was less, we should look to trade the currency pair based on technical indicators and chart patterns.

The above images represent the GBP/CAD currency pair, where we see in the first image that the market seems to be resuming the downtrend after a price retracement to the resistance. Given that the impact of GDP announcement is high, we will look to take a ‘short’ only after confirmation from the market. There is a probability that the market may turn to the upside from this point if the news comes out to be positive for the British Pound.

After the news announcement, we see that the price rises above the moving average, and it closes with some bullishness. Even though the GDP data was fragile, traders bought British Pound and strengthened the currency. One of the reasons could be that the market has factored in the negative expectations, which led to a positive reaction after the news release. One should analyze the pair technically before taking a position in the currency.

The above images are of the NZD/GBP currency pair, where we see that the market is in a steady uptrend before the news announcement, signifying the enormous amount of weakness in the British Pound. Ideally, we will be looking to buy the currency pair after a suitable price retracement to the ‘support’ or ‘demand’ area. By the way, we should also not forget that the news release can reverse the trend.

After the news announcement, we see that the market reacts negatively to the news release but positive for the British Pound since it is on the right-hand side of the currency. The volatility slightly increases to the downside, which is evident from bearish ‘news candle.’

That’s about ‘GDP from Manufacturing’ and its influence on the Forex market after its news release. If you have any questions, please let us know in the comments below. Good luck!