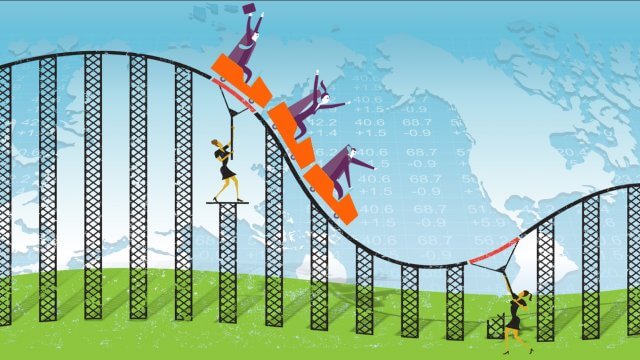 Sometimes currency markets can become extraordinarily volatile. In fact, any market can, depending on what’s been going on. You can be on a good bullish trend, just so a headliner crosses the wires that turn things upside down, causing massive losses. In this article, I will look at the special challenges when it comes to trading in a volatile market.

If situations continue to become very volatile, then you are considering a situation where protecting your risk becomes even more important, and then you should consider the size of your trade. For me, one of the most effective ways I’ve found to protect capital trading in a volatile situation is to reduce position. In other words, if you normally trade with 0.5 lots, then you may want to trade with 0.25 lots because of the inherent risk in a market that can move very quickly.

Understand that risk managers will also force professional traders to reduce their position. In this sense, professional traders tend to trade with much less leverage than retail traders. It is not uncommon for a professional trader to use leverage 1:6 instead of the 1:200 that many retail traders will use. Part of this is because the trader who trades professionally has an account with a lot of balance, which sometimes has millions of dollars depending on the situation and/or the bank they are working for. When you earn 5%, it means much more in that account than in a 2000 USD trading account in a volatile market.

The Trend Becomes Even More Important

When trading in a volatile market, the general trend becomes much more important. While volatile markets usually indicate some change in trend, the reality is that the long-term trend tends to be what the market is generally set. With this situation, if you are trading in a volatile market, you can want to trade only in the direction of the longer-term trend, which means you should sit on your hands from time to time. I think at this point, it’s probably best to wait for the bigger money to come in and push in the right direction, in addition to keeping your trading position smaller, because of the potential for losses.

Usually, a lot of volatility comes into the hands of fear and possible occasional traders, but when you look at a Forex card, the vast majority of the time the trend is for years. There are times when things come and go drastically, but overall, I think most of these movements end up being value propositions for those who are willing to jump into the fire. That does not mean that it should do so vigorously, it only means that the long-term trend remains largely valid. However, it must have a “line in the sand” when it comes to the longer-term trend and recognizes that a breakdown below or above that line represents a change.

Once the long-term trend changes, the overall strategy changes when it comes to transactions, but this as a rule should be something based on monthly graphs. Knowing that this could cause a lot of short-term pain, the truth is that over time the long-term trend is reaffirmed most of the time.

Sometimes It’s Best to Stay Out of It

Unless there is some kind of important geopolitical or global event, the reality is that you can almost always find a pair for trading that is much less volatile. Ultimately, many traders marry a particular pair of currencies, without understanding that they all operate the same. In other words, if you are normally a trader of the EUR/USD pair, then perhaps you should look in another market if you have become too volatile. Exactly what prevents you from changing the pair and starting to use the EUR/CHF pair? Just stay away from the too volatile currency pair, because it’s not worth it. At the end of the day, he’s simply trying to make a profit, not become a genius in a particular currency.

Another thing you can do when things get a little volatile is simply going to higher time frames, which will naturally make you reduce the size of your position. For example, you can usually change the graph per hour and risk something like an average of 50 pips. However, if you are forced to exchange the daily graph, you probably have to risk 100 pips on average. Despite everything, you still want to risk the same amount of money for each trade, so it is advisable to start with a smaller position for the market to work its magic over time. This will force you to focus on a more general overview and pay attention to the overall market attitude rather than the everyday noise.

Turn Off the News

You should be careful when paying too much attention to headlines, as they don’t matter. What matters is where prices go, not what a politician says in Brussels, says Donald Trump, or no one else. The markets are true, and the truth can be found in the prices. Beyond that, when things become too volatile, the analysis is much more likely to be deficient, as even the best analysis of the world can be of very little use after a few hours. You should look at the big picture in these situations and just relax.