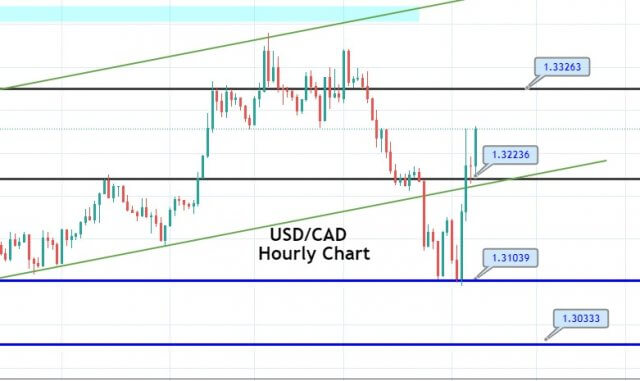 Today in the Asian trading session, the USD/CAD currency pair managed to stop its three-day downtrend and witnessed some heavy buying around above mid-1.3200 level, mainly due to the broad-based U.S. dollar strength. However, the bullish sentiment around the U.S. dollar was being supported by President Donald Trump’s victory in Florida, which pushed the currency pair intraday high.

On the contrary, the upticks in the oil prices, backed by the bigger-than-expected draw in the U.S. crude stockpiles, became the key factor that kept the lid on any additional crude gains oil prices. Moreover, the bullish sentiment around the crude oil prices was also supported by the reports suggesting that OPEC and its allies (OPEC+) maintaining current production restrictions, which tend to ease oversupply fears and contribute to oil prices. Currently, the USD/CAD currency pair is currently trading at 1.3234 and consolidating in the range between 1.3093 – 1.3278.

As we all know, the market risk sentiment has been flashing mixed signals since the day started amid U.S. election polls. However, the expectations of a blue wave in the U.S. Congress weakened quickly after President Donald Trump won Florida’s key battleground state. Conversely, the Arizona governor said that it was too early to call the state for Biden. As per Fox News, the tally on the electoral College now stands at 233 for both Joe Biden and Donald Trump, indicating that the race is tighter than expected.

At the USD front, the broad-based U.S. dollar managed to keep its gains throughout the day as the traders still cheering President Donald Trump’s victory in Florida. Put, the bid tone around the safe-haven greenback seems to have increased in response to betting markets having President Trump as the favorite to win elections. However, the U.S. dollar gains seem rather unaffected by the risk-on market sentiment. Thus, the gains in the U.S. dollar become the key factor that kept the currency pair higher. Meantime, the U.S. Dollar Index that tracks the greenback against a bucket of other currencies rose to 93.898.

At the crude oil front, the crude oil prices succeeded in gaining positive traction and surged to the $38.80 mark after a surprise draw of -8.01M, against 4.55M prior, in private inventory data published by the American Petroleum Institute (API) on Tuesday. This, in turn, boosted crude oil prices by over 3% overnight. Furthermore, the sentiment around crude oil was improved further after the reports concluded that the Organization of the Petroleum Exporting Countries (OPEC) and its allies maintained current production restrictions, which tend to ease oversupply fears and contribute to the oil prices. Thus, the rise in oil prices underpinned demand for the commodity-linked currency the loonie and became the major factor that capped the pair’s further gains.

In the absence of significant data/events on the day, the market traders will keep their eyes on the continuous drama surrounding the U.S. elections and updates about the U.S. stimulus package.

The USD/CAD is trading with a bullish bias at the 1.3278 level, having violated the immediate resistance level of 1.3223. it’s the same level extended by an upward channel, which got violated a couple of days ago. On the higher side, we can expect the USD/CAD pair to continue trading bullish until the 1.3323 level, as the MACD is also in support of the buying trend. The recent bullish engulfing is in support of buying; however, the election results may drive some volatility in the market. Let’s wait for a trading signal!