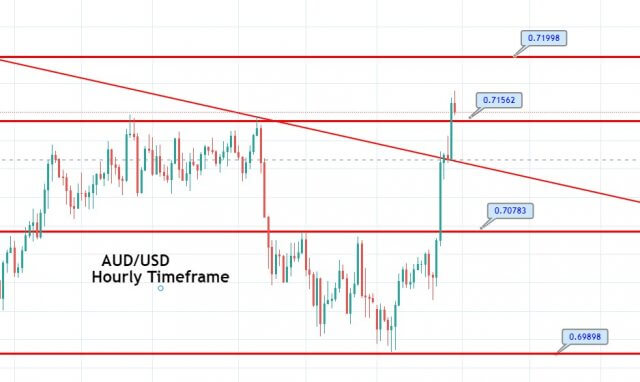 The AUD/USD currency pair succeeded to stop its overnight declining streak and drew some modest bids around above mid-0.7000 level mainly due to the risk-on market sentiment, which tends to underpin the perceived risk currency Australian dollar and contributes to the currency pair gains. Hence, the market trading sentiment was being supported by upbeat activity data from the U.S., China, and Europe, which rekindled economic recovery hopes and underpinned the market risk-tone.

Apart from this, the market trading sentiment was further bolstered by the updates suggesting continuous progress of Brexit talks between the U.K. and the European Union (E.U.), which extended further support to the currency pair. Across the pond, the broad-based U.S. dollar selling bias, triggered by the marker risk-on sentiment, also played its major role in supporting the currency pair. Moreover, the losses in the U.S. dollar was further bolstered by the intensifying doubts over the U.S. economic recovery ahead of the U.S. presidential elections.

On the contrary, the long-lasting coronavirus woes globally, as well as delays in the U.S. covid stimulus, keep challenging the upbeat market sentiment, which becomes the key factor that kept the lid on any additional gains in the currency pair. In the meantime, the gains in the currency pair were further capped by the reports suggesting that the RBA is expected to cut the benchmark rate and announce more Q.E. At this time, the AUD/USD currency pair is currently trading at 0.7057 and consolidating in the range between 0.7044 – 0.7063.

Despite the concern about the second wave of coronavirus infections, which leads the lockdown measures, the market trading sentiment remained positive during the early Asian session amid positive developments surrounding the Brexit talks between the U.K. and the European Union (E.U.), which in turn, underpinned the perceived risk currency Australian dollar and contributed to the currency pair gains.

Across the ocean, bullish sentiment around the equity market was further bolstered by the upbeat activity numbers from the U.S., China, and Europe, which rekindled economic recovery hopes and underpinned the market trading sentiment. As per the latest report, the ISM manufacturing index jumped to the highest in more than two years.

As in result, the S&P 500 futures succeeded to extend its overnight positive momentum and remain bullish on the day, which tends to undermine the demand for the safe-haven U.S. dollar and extended support to the currency pair. Despite the upbeat U.S. data, the broad-based U.S. dollar failed to erase its overnight losses and remained under pressure on the day mainly due to the marker risk-on tone. Apart from this, the resurgence of coronavirus keeps fueling the fears that the U.S. economic recovery could be halt, which also keeps the greenback under pressure. However, the losses in the U.S. dollar could be considered as the major factor that kept the currency pair higher. Meanwhile, the U.S. Dollar Index that tracks the greenback against a bucket of other currencies dropped to 93.977.

On the contrary, the intensifying coronavirus woes across the globe, as well as, intensifying lockdowns restrictions in Europe keep challenging the upbeat market sentiment and become the key factor that kept the lid on any additional gains in the currency pair. As per the latest report, Europe declared this weekend second lockdowns amid surging coronavirus cases. It is worth recalling that the market and industry professionals were not expecting renewed lockdowns for whole countries. Late last week, Austria announced a second lockdown until the end of November, including closing hotels for tourism, as well as restaurants except for takeaway and delivery. Apart from froths, the U.K., one of the largest economies in Europe, is also imposing lockdown restrictions while Belgium also returned to a nationwide lockdown.

Elsewhere, the growing probabilities that the RBA will cut interest rates in November could also be considered as one of the key factors that kept the lid on any additional gains in the currency pair. It is worth recalling that the benchmark interest rate likely cut to 0.10% from 0.25%.

In the absence of the major data/events on the day, the market traders will keep their eyes on the monetary policy meeting of the RBA and the U.S. presidential election for fresh directions. In the meantime, the risk catalyst like geopolitics and the virus woes, not to forget the Brexit, will also be key to watch.

The AUD/USD has traded sharply bullish amid weaker U.S. dollar, as the pair crossed over 0.7150 level. On the higher side, the AUD/USD pair may head further higher until the next resistance area of 0.7199 level. The MACD and RSI are extremely overbought, and however, we have to wait for bearish reversal candles ahead of opening a sell trade in Aussie. On the lower side, the Aussie can find support at 0.7150 and 0.7105 mark. Let’s wait for the U.S. elections before opening any further trades today. Good luck!