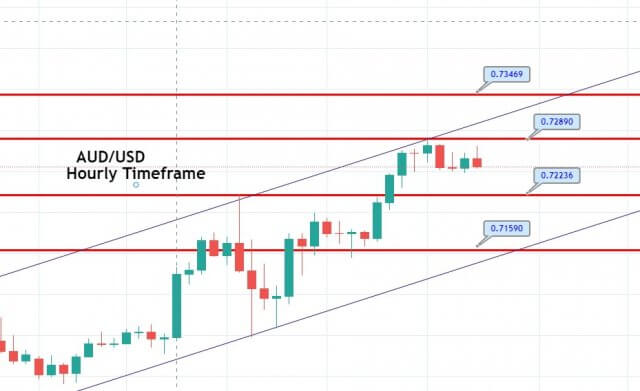 The AUD/USD currency pair failed to extend its previous day bullish moves and took fresh offers near below the 0.7250 level mainly due to prevalent risk-off market sentiment, triggered by the worsening coronavirus (COVID-19) conditions in the U.S. and the U.K., which exerted some selling pressure on the perceived riskier Aussie and dragged the currency pair below 0.7000 marks.

However, the global risk sentiment was further pressured by the uncertainty surrounding the U.S. election, triggered by the rumors concerning the delay in U.S. election results until January. On the other hand, the broad-based U.S. dollar fresh strength, backed by the risk-off market sentiment, has also played its major role in undermining the currency pair.

On the contrary, the currency pair’s losses were capped by the RBA’s monetary policy statement, in which the RBA explicitly calling out no further reduction in interest rates, which tend to underpin the Australian dollar and helps the currency pair to limit its deeper losses. At the moment, the AUD/USD currency pair is currently trading at 0.7255 and consolidating in the range between 0.7250 – 0.7285.

The market trading sentiment remains depressed during the early Asian trading session due to the second wave of coronavirus infections in the U.S. and the U.K. getting worse day by day. As per the latest report, there are 109,000 new COVID-19 cases from the U.S. so far. Thus, these figures marked the second day in a row with over 100,000 new cases after beating Wednesday’s daily record.

Additionally, the long-lasting inability to pass the U.S. fiscal package, as well as the jitters of the American presidential election also weighed on the risk sentiment, which eventually undermined the perceived riskier Australian dollar and contributed to the currency pair gains.

Despite Democratic candidate Joe Biden’s heavy role in the electoral votes, currently around 260 counts against 270 required, the U.S. election results still not showing any decision. However, the reason could be attributed to President Donald Trump’s lawsuits against multiple states. As per the latest report from Pennsylvania, Trump’s lead getting narrowed over the democratic rival Biden.

Despite this, the broad-based U.S. dollar succeeded in stopping its last session losses and took some fresh bids during Friday’s Asian session as investors started to prefer the safe-haven assets in the wake of the risk-off market sentiment. However, the U.S. dollar gains seem rather unaffected by the downbeat comments from the Fed Chair Jerome Powell. On the other hand, the U.S. dollar gains were also capped by the prevalent worries over the U.S. economic recovery amid the reappearance of coronavirus cases, which could be bad for both the U.S. and the global economy. However, the U.S. dollar gains become the key factor that kept the currency pair under pressure. Simultaneously, the U.S. Dollar Index that tracks the greenback against a basket of other currencies recovered to 92.698.

The Fed has performed as broadly expected, maintaining its benchmark interest rate at the 0%-0.25% range and its bond-buying program unchanged. In the meantime, he showed readiness to fulfill its pledge to support the U.S. economy, “promoting its maximum employment and price stability goals in times of the COVID-19 pandemic.

At home, the currency pair’s losses were capped by the RBA’s monetary policy statement, in which the RBA indicated for no further reduction in interest rates, which tend to underpin the Australian dollar and helps the currency pair to limit its deeper losses.

Moving ahead, the market traders will keep their eyes on the American employment numbers for October., USD price dynamics, and coronavirus headlines, which could give a fresh direction for the currency pair. In the meantime, the updates surrounding the U.S. elections could not lose their importance on the day.

The AUD/USD traded distinctly bullish at the 0.7262 area, with a critical resistance of 0.7282 and 0.7335. In the daily chart, the AUD/USD has established a substantial buying candle, conferring substantial bullish sentiment among investors. While on the lower side, the support can be seen around the 0.7230 mark. Bullish sentiment rules the market. Good luck!