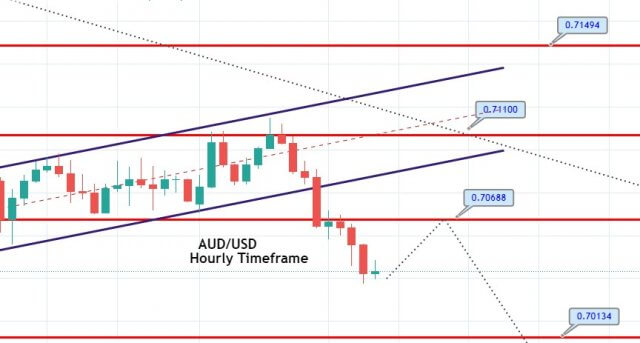 The AUD/USD pair was closed at 0.70685 after placing a high of 0.71144 and a low of 0.70685. Overall the movement of the AUD/USD pair remained bearish throughout the day. The AUD/USD pair extended its previous day’s losses and dropped for the third consecutive day on Monday as the market sentiment soared after the reports from the US dampening hopes of a US COVID-19 stimulus deal.

The upbeat Chinese GDP data for the third quarter gave strength to the Australian dollar and helped AUD/USD pair to open its week on a strong note. The Asian giant’s economy and the largest trading partner of Australia expanded by 4.9% in Q3 and showed strong industrial output and consumption figures that pointed out a strong recovery from the pandemic that hit Q2 hardest.

The China-proxy Aussie gained traction after the upbeat data from China, and the US dollar became weak, ultimately pushing the AUD/USD pair on the higher side in the early trading session on Monday. However, the gains were short-lived, and the AUD/USD pair’s movement reversed as the hopes for a US stimulus package faded away.

During the Weekend, the statement from Nancy Pelosi that a deal might be reached before elections over the US stimulus package gave strength to the risk sentiment. The improved risk sentiment pushed AUD/USD pair to open on a strong note, but the upward momentum was broken after hopes deteriorated on Monday.

The mixed situation has weighed on the risk sentiment as the stimulus hopes are fading with the passage of time and the risk perceived Aussie suffered that reversed the direction of AUD/USD pair on Monday.

The pair AD/USD started moving in the downward trend because of the rate differentials between 10-year government bond yields of Australia and the US. The US 10-year Treasury yields were around 0.77%, and the Australian counterpart was at 0.750%.

The market participants will be looking forward to the release of monetary policy meeting minutes from the Reserve Bank of Australia on Tuesday and will keep following the bearish bias until finding some fresh clues for future trading.

The AUD/USD is trading at the 0.7043 level, having violated the bullish flag pattern on the 2-hour timeframe. On the lower side, bearish trend continuation can lead the AUD/USD pair towards the support area of 0.7014 level. At the same time, the support continues to stay at the 0.7068 level. The bearish bias remains dominant today; therefore, we should look for selling trades below the 0.7067 level today. Good luck!