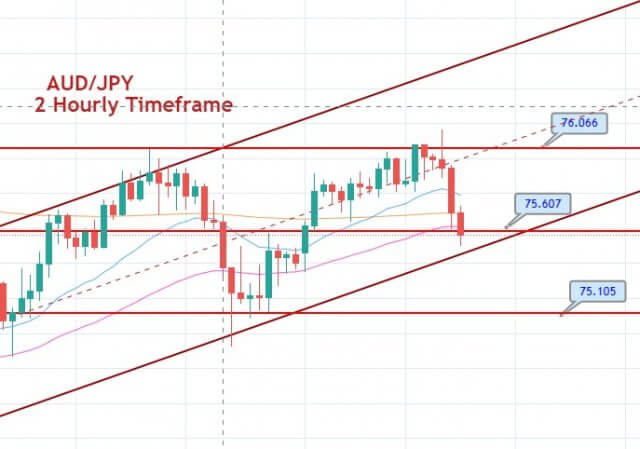 Today in the Asian trading session, the AUD/JPY currency pair failed to keep its early-day bullish momentum and dropped well below the 76.00 level despite the upbeat market sentiment. However, the reason for the prevalent bearish sentiment around the currency pair could be associated with the RBA’s announcement of no rate change, as well as, the RBA has a dovish view on the Australian economy, which could be considered as one of the key factors that undermine the Australian dollar and contributed to the currency pair losses. Across the pond, the currency pair declines were further bolstered after the US Secretary of State Mike Pompeo said Japan’s Prime Minister (PM) Yoshihide Suga would strengthen the relationship with the US. Thus, the Japanese yen got impressed by the above comments, which adds further downside pressure around the AUD/JPY currency pair.

On the contrary, the upbeat market mood, backed by optimism over US President Trump’s health, could be considered one of the key factors that help the currency pair limit its deeper losses. The AUD/USD currency pair is currently trading at 75.64 and consolidating in the range between 75.60 – 76.16. As we already mentioned, the global risk sentiment got a strong boost after US President Trump leaves the hospital and feels “20-years younger”. Despite this, the doubts over Donald Trump’s remain high as a recent video from the American leader showed that he struggles while breathing. Besides, the doubts were further fueled after the White House’s recent confirmation that Trump will be under 24-hour care, and anybody nearing the President will need to wear the PPE kit.

At the US-China front, the renewed US-China tussle also keeps challenging the market risk-on mood, adding further pessimism around the currency pair. As per the latest report, the Dragon Nation recently fueled the Sino-American tussle by criticizing the US ban on TikTok and WeChat at the World Trade Organization (WTO).

At the AUD front, the Reserve Bank of Australia (RBA) held its cash rate, and the targeted yield on 3-year bonds unchanged at 0.25% during the latest announcement. In the meantime, the RBA has a dovish view of the Australian economy, which ten underpins the Australian dollar and contributes to the currency pair losses. It should be noted that the RBA confirmed that Unemployment and underemployment are expected to remain high for an extended period. They further added, “Wage and inflation pressures remain very depressed.”

Across the ocean, the currency pair losses got an additional boost after the US Secretary of State Mike Pompeo said Japan’s Prime Minister (PM) Yoshihide Suga is a ‘powerful force for good’, as well as Pompeo further added that he believes Suga will strengthen the relationship with the US. These positive comments tend to underpin the Japanese yen currency and drag the currency pair lower.

Looking forward, the market traders keeping their eyes on the crude oil supply data from the American Petroleum Institute (API) due later in the day. In the meantime, the updates surrounding the fresh Sino-US tussle, as well as the coronavirus (COVID-19), could not lose their importance.