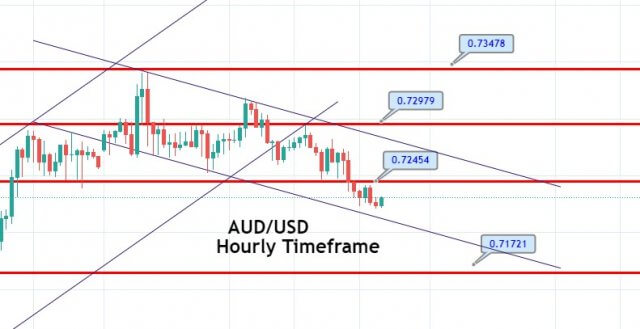 Today in the Asian trading session, the AUD/USD currency pair erased some of its earlier gains but still trading on the bullish track and taking rounds just closer to the 0.7250 level, mainly due to the broad-based U.S. dollar weakness. Hence, the broad-based U.S. dollar was being pressured by the doubts persist over the global economic recovery from COVID-19. This, in turn, undermined the greenback and contributed to the currency pair gains.

On the other hand, the optimism over the coronavirus (COVID-19) vaccine/treatment also lends some minor support to the currency pair by underpinning the perceived risk currency Australian dollar. On the contrary, the intensified clashes between the US-China over the Hong Kong crackdown could be regarded as one of the important factors that might cap further upside momentum for the AUD/USD pair. The AUD/USD pair is currently trading at 0.7237 and consolidating in the range between 0.7228 – 0.7242.

The intensifying market worries regarding the continuous surge in new coronavirus cases in Europe and the United States keep fueling the doubts over the global economic recovery through imposing new lockdown restrictions on economic and social activity, which eventually weighed on the market trading sentiment. As per the recent report, the U.S. coronavirus cases reached a new daily record high, with 140,543 reported. Almost 10.4 million peoples in the U.S. have been infected by the Covid-19 so far. While almost 242,000 have died from this, according to the Johns Hopkins University report. As in result, New York has announced a 10 p.m. curfew on bars, gyms, and restaurants to curb the spread. Afterward, Chicago also followed the footsteps of New York and restricted activities.

In addition to the U.S., Europe also imposed lockdown again last week, threatening the oil outlook and undermining oil prices. It is worth recalling that Sweden declared a partial lockdown shutting down bars and restaurants for the 1st-time since the virus started. Thus, the back to back lockdowns restrictions keep harming the crude oil demand.

Besides the virus woes, the reason for the downbeat market sentiment could also be associated with the long-lasting US-China tussle, which fueled further after the U.S. warned China over the Hong Kong crackdown during the previous day. Apart from this, the Trump administration shows a willingness to limit investments in Chinese companies, fueling the already intensified tussle.

Despite the risk-off market sentiment, the broad-based U.S. dollar failed to extend its previous day gains. It slipped lower mainly due to the heavy optimism over the potential vaccine for the highly infectious coronavirus disease. Apart from this, coronavirus’s resurgence keeps fueling the fears that the U.S. economic recovery could be halt, which also keeps the USD under pressure. However, the U.S. dollar losses could be considered the major factor that pushes the currency pair higher. Meanwhile, the U.S. Dollar Index that tracks the greenback against a bucket of other currencies dropped to 92.957.

In the absence of the major data/events on the day, the market traders will keep their eyes on the continuous drama surrounding the U.S. stimulus package. In the meantime, the risk catalyst like geopolitics and the virus woes, not to forget the Brexit, will also be key to watch for a fresh direction.

The AUDUSD traded with a bullish bias, but it recently has violated the upward channel at the 0.7245 level. The Aussie has now entered the new region, and it has formed a downward channel on the smaller timeframe now, which is likely to extend resistance at 0.7245 level along with support at 0.7200. A bearish breakout of 0.7200 level can open further room for buying until 0.7122 level. The MACD is also in support of selling; therefore, we should look for selling trades below the 0.7245 level today. Goold luck!