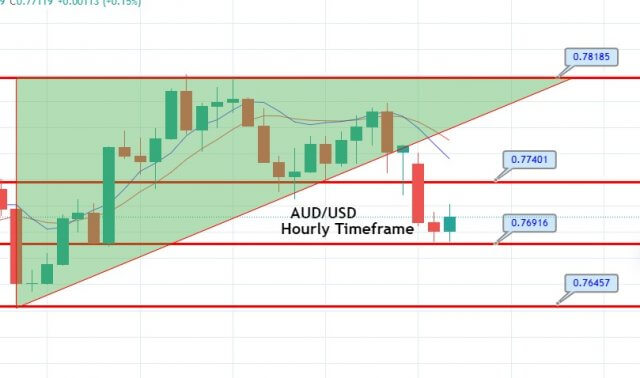 The AUD/USD closed at 0.77665 after placing a high of 0.77984 and a low of 0.77280. The currency pair AUD/USD remained flat throughout the day on Friday and closed its day at the same level it began its day with as the risk rally pushed the pair higher and the US dollar strength dragged the pair AUD/USD lower at the same time.

The risk-sensitive Aussie just went with the flow and boosted by rallying equities and persistent hopes that the economic chaos triggered by the coronavirus pandemic was on its final stage. The risk sentiment in the market was also supported by the latest announcement from the UK on Friday. The UK announced that it’s medical regulatory has approved a third vaccine for coronavirus made by Moderna for emergency use authorization.

The rising risk sentiment was also supported by the decreasing political risk in Washington related to power transition. The US President Donald Trump has agreed to a transition of power, and this has raised the risk sentiment in the market and supported the upward momentum in AUD/USD pair in the early trading session. However, the AUD/USD pair’s gains were lost in the late trading hours on Friday after the US Dollar became strong across the board. The greenback was high on Friday, with the US Dollar Index above the 90.00 level for the first time this week. The US treasury yields on the 10-year note were also high on Friday, with 3% up for the day and 21% up for the week. All these factors added to the US dollar demand that ultimately weighed on AUD/USD pair and forced the pair to lose its early daily gains.

The AUD/USD pair remained flat throughout Friday amid the mixed market sentiment and left the investors to await the publication of the final reading of November Retail Sales from Australia while China will provide an update on inflation that will also remain under close observation by AUD/USD investors.

On Thursday, China will release its December Trade Balance that may also impact AUD/USD pair. The US’s CPI data on Wednesday and Retail Sales on Thursday will also affect the AUD/USD pair’s momentum in upcoming days.

The AUD/USD pair has bounced off over the 0.7690 level, forming a bullish engulfing candle on the 2-hour timeframe. It may bounce off to trade until the 0.7740 level, where 10 & 20 periods EMA are likely to extend resistance at 0.7740. On the lower side, the AUD/USD may find support at the 0.7690 level. A bearish breakout of 0.7690 level can extend the selling trend until the next support area of 0.765 level today. Good luck!