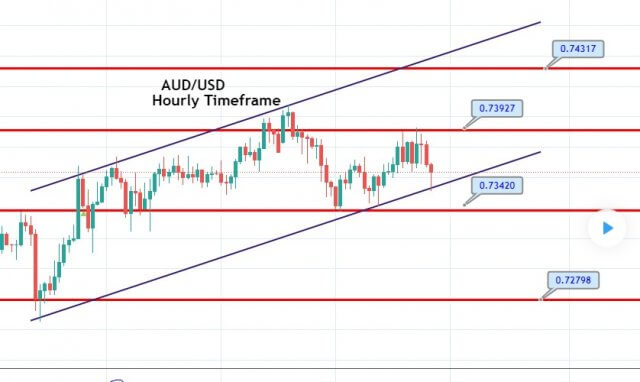 The AUD/USD closed at 0.73723 after placing a high of 0.73731 and a low of 0.73393. The increasing risk sentiment in the market due to vaccine hopes they raised the risk-sensitive Aussie in the market and supported the AUD/USD pair’s upward momentum. Another factor involved in the rising AUD/USD prices on Tuesday as the US dollar’s weakness.

The US dollar lost its traction in the market after the hopes for further stimulus from Congress were raised, and the macroeconomic data also came in against the local currency. The losses in the US dollar could also be attributed to the rising number of coronavirus cases in the USA.

On Tuesday, the US health officials said that Americans would hopefully receive the vaccine shots against the coronavirus starting from mid-December after the emergency authorization use of Pfizer’s vaccine will be approved by the US FDA. This positive news supported the risk sentiment, raised the risk-sensitive Aussie on board, and supported the AUD/USD pair’s upward momentum.

Another reason behind the bullish movement of the AUD/USD pair on Tuesday was the increasing hopes of the US stimulus bill after the testimony of Jerome Powell and Steven Mnuchin. The Fed chair Jerome Powell said that the rising number of coronavirus cases and deaths because of the pandemic had destroyed the US economy’s outlook. The outgoing US Treasury Secretary Steven Mnuchin also urged the lawmakers to release the second round of US stimulus package as the economy has been hit hard because of the pandemic due to increased restrictive measures in many states of America.

Meanwhile, on Tuesday, the Reserve Bank of Australia kept its Cash Rates to their rock bottom level at 0.1% and said it would not further cut the rates. The Governor of RBA Philip Lowe said that the bank was doing its best to revive the nation from its current coronavirus induced recession. Lowe added that the economic recovery was underway, but its economic data was coming better than expected.

He also said that the recovery was still expected to be uneven and was dependent on significant policy support. RBA’s GDP forecast would grow by around 5% in 2021 and 4% in 2022. The positive comments from RBA and positive outlook for Australia added strength in local currency Aussie and supported the bullish momentum of the AUD/USD pair on Tuesday.

The AUD/USD is trading sideways, holding between 0.7392 – 0.7342 levels, and closing of candles below 0.7392 level supports selling bias. While buying trend can be seen over 0.7345 level. On the 2 hour timeframe, the AUD/USD has formed an upward channel, which is likely to keep the pair supported. Let’s consider taking a buying trade over the 0.7340 level today. Good luck!