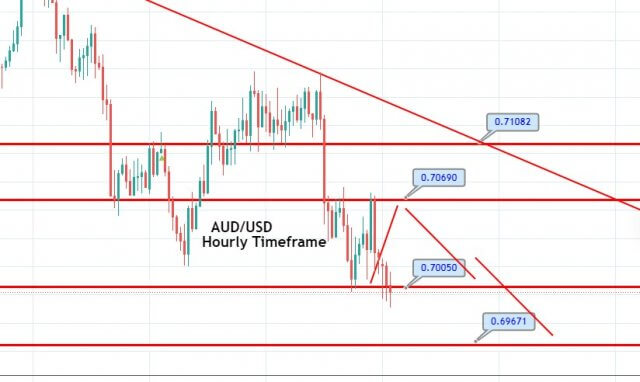 During Monday’s early Asian trading hours, the AUD/USD currency pair failed to stop its previous week’s bearish moves and took further offers near well below the 0.7000 level mainly due to prevalent risk-off market sentiment, triggered by the worsening coronavirus (COVID-19) conditions in Europe and the U.K., which exerted some selling pressure on the perceived riskier Aussie and dragged the currency pair below 0.7000 marks. However, the global risk sentiment was further pressured by the fading hopes of additional U.S. fiscal stimulus.

On the other hand, the broad-based U.S. dollar fresh strength, backed by the combination of factors, has also contributed to the currency pair losses. At the moment, the AUD/USD currency pair is currently trading at 0.7094 and consolidating in the range between 0.7093 – 0.7172.

The market trading sentiment continues to be depressed during the early Asian trading session as the condition of the second wave of coronavirus infections in Europe and the U.K. getting worse time by time. As per the latest report, the global coronavirus cases exceeded 500,000 last week with Europe crossing the bleak milestone of 10 million total infections.

This, in turn, the major Europeans like Germany and France, are ready to enter partial one-month lockdowns in efforts to stop a growing second wave of the pandemic. Whereas, the U.K. is facing more than 20,000 new cases per day while a record rise of U.S. cases is killing up to 1,000 people a day.

Additionally, the long-lasting inability to pass the U.S. fiscal package as well as the jitters ahead of the American presidential election also weighed on the risk sentiment, which eventually undermined the perceived riskier Australian dollar and contributed to the currency pair gains. In the meantime, the renewed concerns over worsening diplomatic tensions between the world’s two largest economies also placed a downside pressure on the market trading, which keeps the AUD/USD currency pair under pressure.

The greenback succeeded to extend its last week gains and took some further bids during Monday’s Asian session as investors still prefer the safe-haven assets in the wake of risk-off market sentiment. However, the U.S. dollar gains seem rather unaffected by the intensifying political uncertainty ahead of the upcoming U.S. presidential election on November 3. However, the ongoing disappointment ahead of the key U.S. elections where the Democratic victory is widely anticipated might cap further upside momentum for the U.S. dollar.

The reason for the losses in the currency pair could also be associated with the increased odds of an interest rate cut by the Reserve Bank of Australia in November. As per the latest report. The RBA is broadly expected to take down the benchmark interest rate to the record low of 0.10% from 0.25% currently. The reason could not only be the dovish comments from Governor Philip Lowe but downbeat minutes also favour the rate cut forecasts.

On the contrary, China’s official PMIs came in better than expected in October, which becomes the main factor that helps the currency pair to limit its deeper losses. At the data front, China’s official NBS Manufacturing and Non-Manufacturing PMIs for October flashed better than 51.3 and 52.1 respective forecasts to 51.4 and 56.2 respective figures. Moreover, the losses in the currency pair were also capped by the reports suggesting that the coronavirus conditions in Australia have started to ease, and Queensland is soothing border conditions.

The AUD/USD has disrupted the double bottom support mark of 0.7011, and beneath this, the AUD/USD is expected to trade with a bearish sentiment today. On the downside, the AUD/USD may meet critical support at the levels of 0.6997 and 0.6974. In contrast, the AUD/USD may extend to a shift on the higher side on violation of 0.7024 mark to begin the Aussie price towards 0.7054 mark. Good luck!