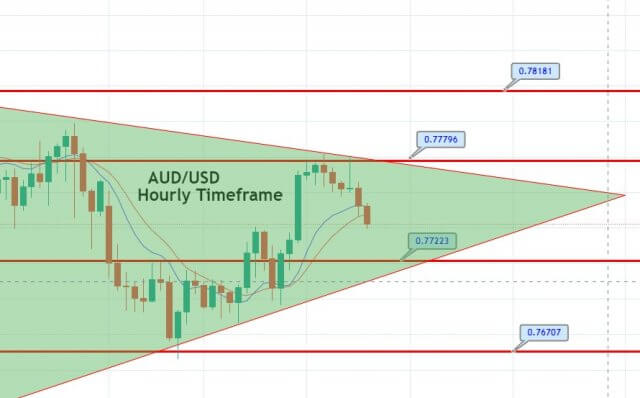 The AUD/USD closed at 0.77738 after placing a high of 0.77772 and a low of 0.76865. The AUD/USD pair recovered on Tuesday after the US dollar came under fresh pressure due to the US’s rising political risks.
The risk-sensitive Aussie gained traction on Tuesday despite the rising risk-off mood in the market. The risk sentiment suffered on Tuesday as the FBI told that it had received information indicating armed protests were being planned at all 50 state capitols and Washington. These comments also weighed on the US dollar that ultimately added to the AUD/USD pair’s rising prices on Tuesday.

On the other hand, the greenback was weak during Tuesday as the US Dollar Index that measures the value of the US dollar against the basket of six major currencies fell to 90.20 level and supported the upward momentum in AUD/USD pair. The risk-off market sentiment was also supported by the rising number of coronavirus cases and the increased tougher restrictions across the world to curb coronavirus spread. Meanwhile, the 10-year US Treasury yields were up by almost 2% on Tuesday, suggesting that DXY’s downside will remain limited if yields continued to rise.

On the data front, there was no macroeconomic data to be released from Australia. While From the US side, at 16:00 GMT, the NFIB Small Business Index for December fell to 95.9 against the expected 100.1 and weighed on the US dollar that ultimately added in the gains of AUD/USD pair. At 20:00 GMT, the JOLTS Job Openings for November rose to 6.53M against the anticipated 6.42M and supported the US dollar that capped further gains in AUD/USD pair. At 20:02 GMT, the IBD/TIPP Economic Optimism came in line with the anticipations of 50.1.

On Tuesday, Donald Trump’s administration said that it gave millions of coronavirus vaccine doses that it had been keeping back for second shots and encouraged states to offer them to all Americans above age 65 or with persistent health conditions. These comments added in the risk sentiment and supported risk perceived Aussie that ultimately added the AUD/USD pair’s upward momentum.