In this session, we will be looking at fundamental analysis for novices and taking a look at the New Zealand visitor arrivals’ economic data release and how it might impact the New Zealand dollar.
If this is the first time you have seen one of our fundamental analysis or novices videos, we place a great deal of emphasis on the importance of regularly studying an economic calendar for the release, by governments and agencies, of economic statistics, which paint a picture of the health of an economy.

These economic data releases happened weekly, monthly, quarterly, or annually with regard to statistics, but also so provide important information for upcoming events such as key policymaker speeches, upcoming interest rate decisions, and other significant future events which may cause shifts in exchange rates for the various currency pairs.

Obviously, if you are trading a currency pair and are unaware of such key market-moving data releases, it might adversely affect the trade you are in, causing losses.
All professional traders keep a close eye on their economic calendar because it is another tool in their arsenal to help them make the right call when trading. 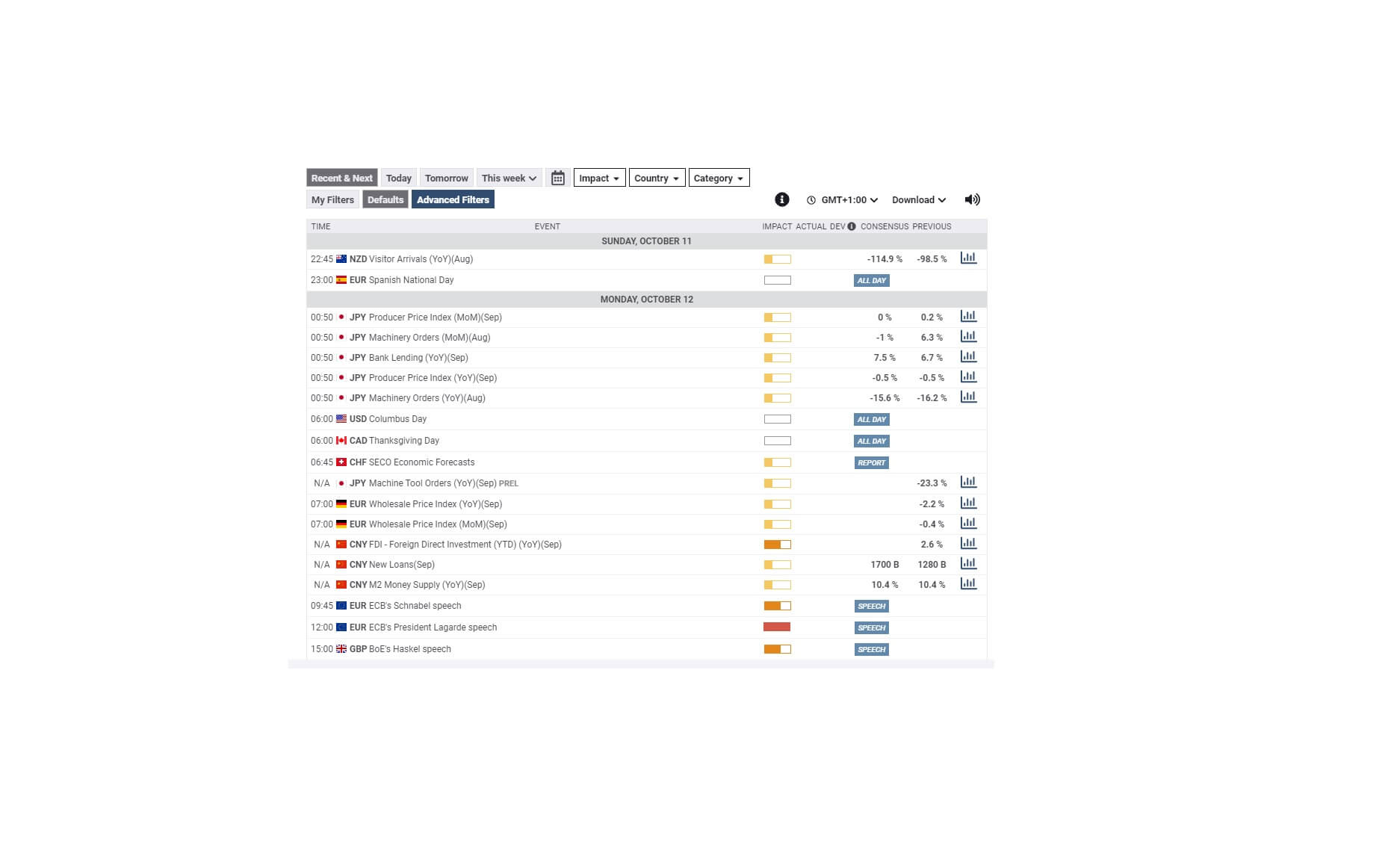 This is a typical economic calendar. Most reliable brokers will offer this free of charge on their Website. 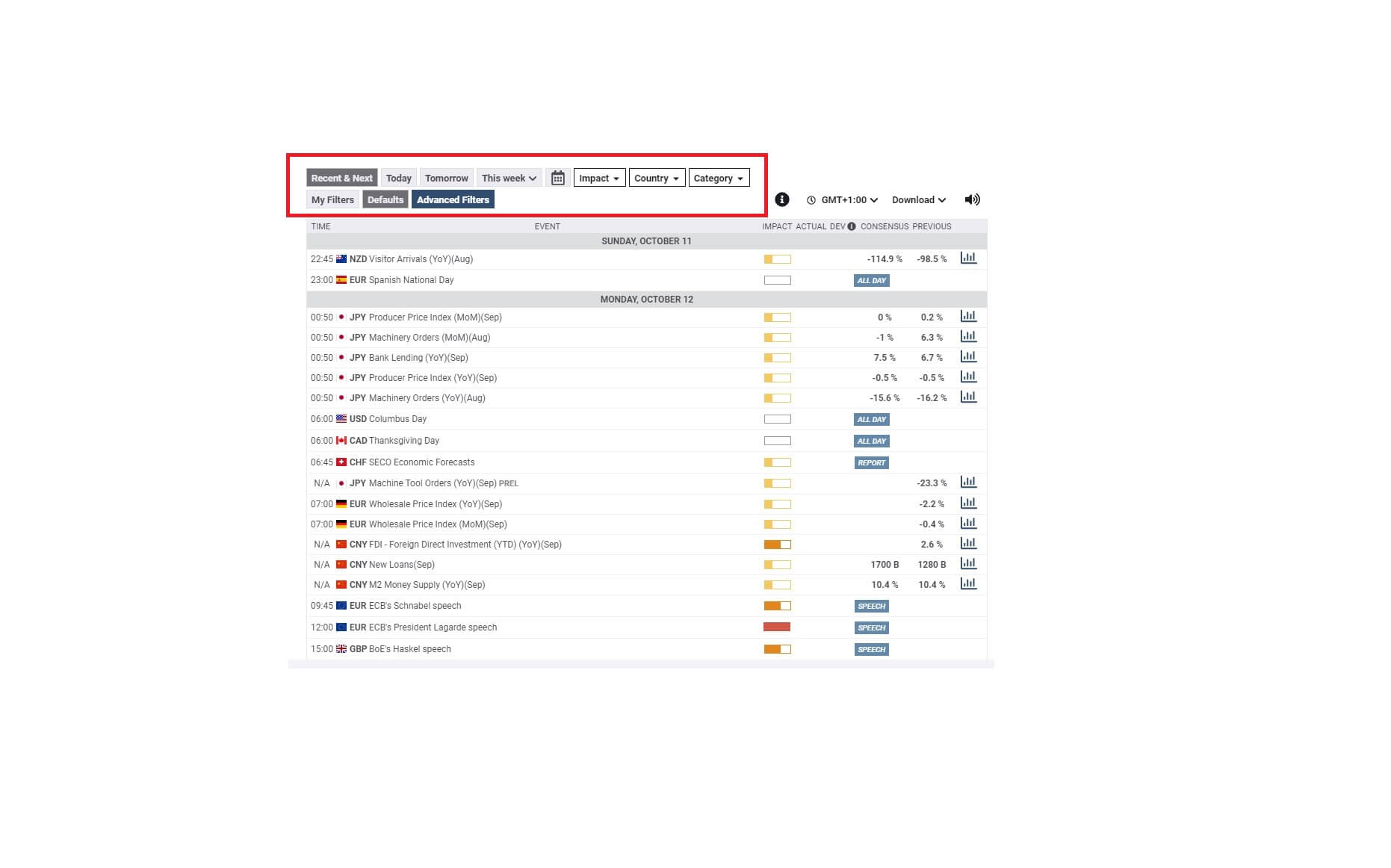 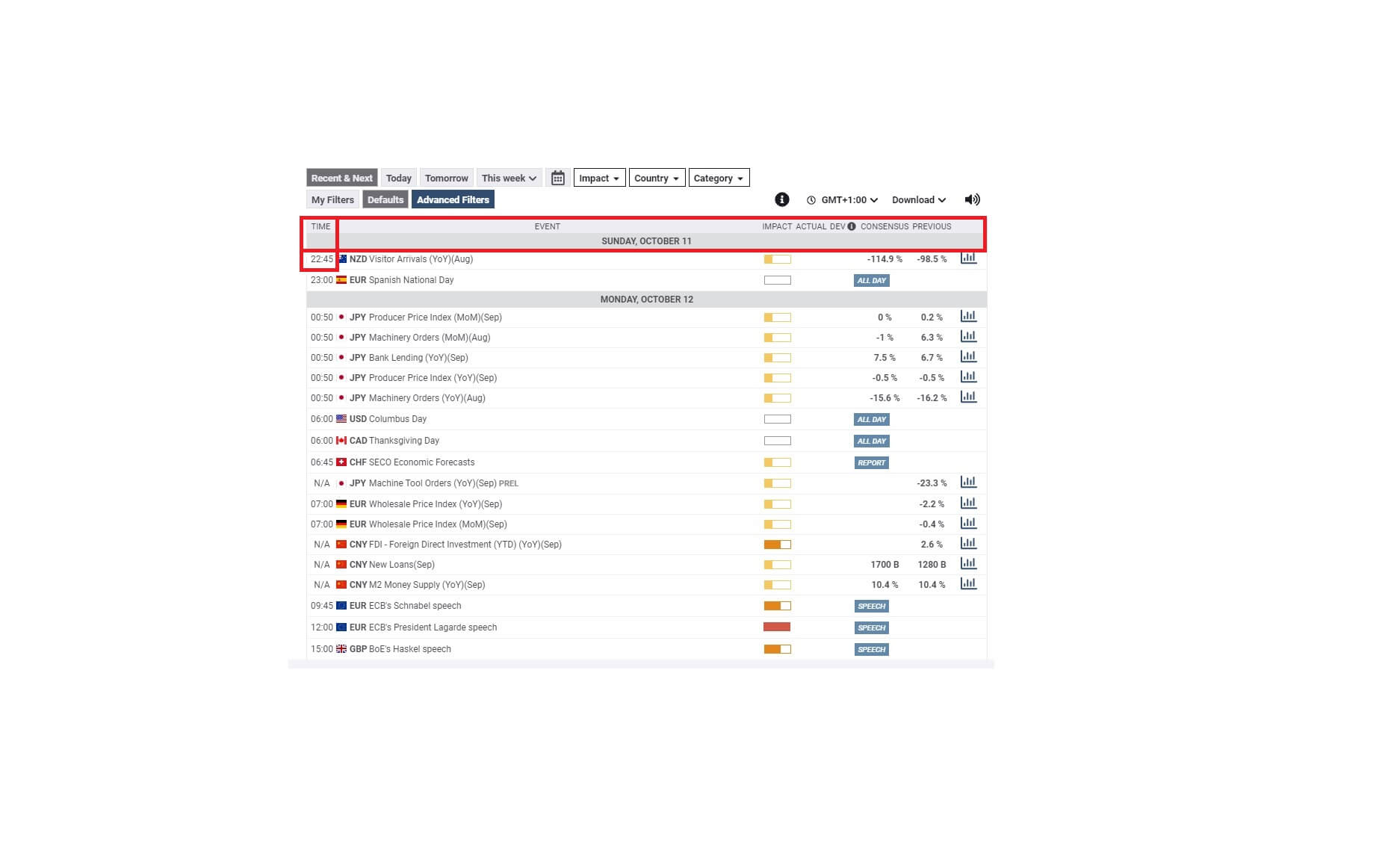 The critical components of an economic calendar are the day and date, the type of event, the time of the event, the country, the likely impact that that data release will have on a currency pertaining to that country, which might be low impact, medium or high, and where the higher the impact level, the more likely you will see volatility around that currency, post-release.
As we can see here, the information relating to the event is populated on the calendar just underneath the titles section. 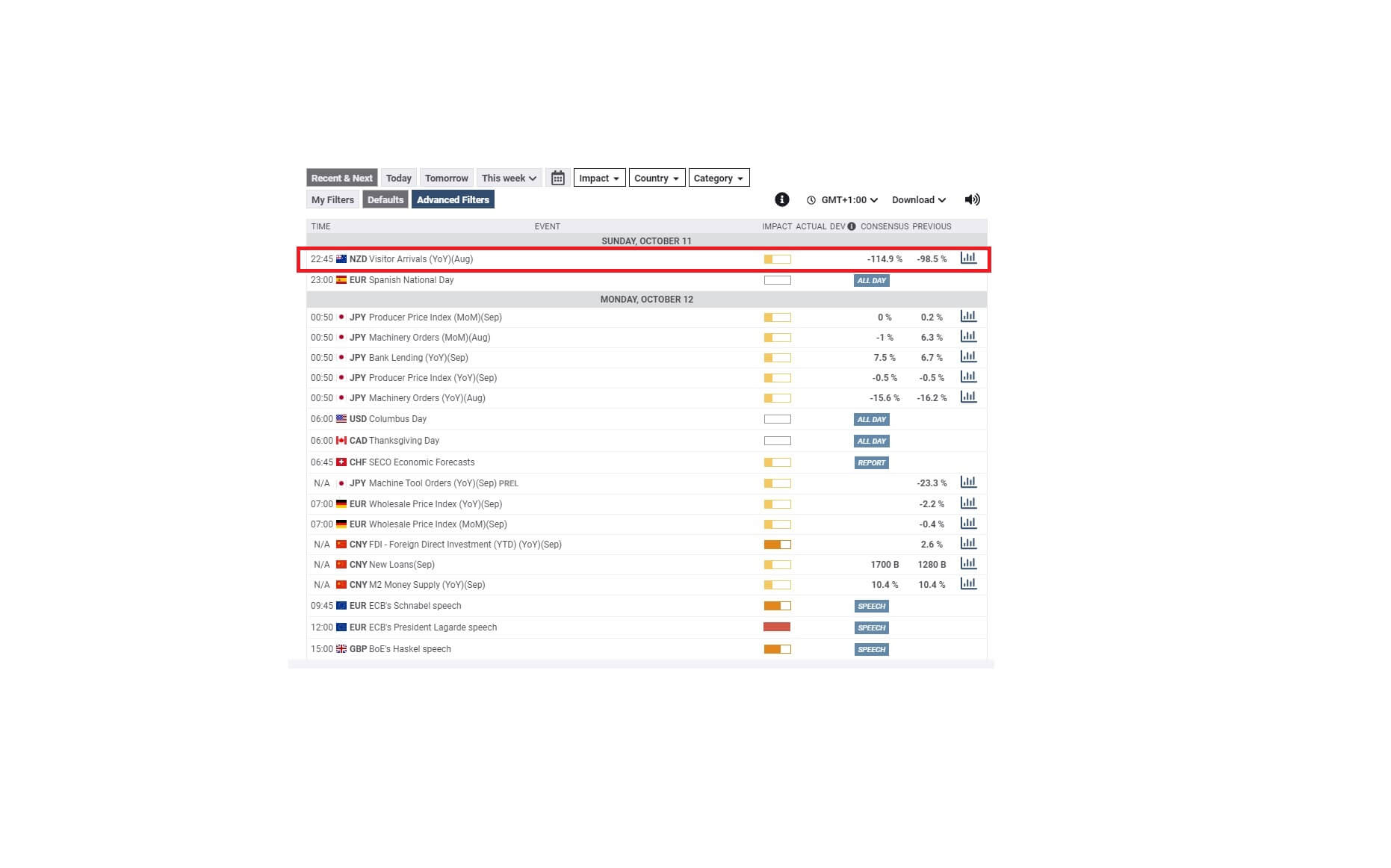 The economic events we are interested in this session is the New Zealand visitor arrivals, the data of which will be released at 22:45 British summer time for the month of August, where the impact level is low, and where we can see that the previous release was – 98.5% and a consensus is – 114.9%. The consensus is put together by leading economists. Here we can see that they have a gloomy outlook for visitor arrivals for September and where the consensus is that the figure will be worse than the previous month year-on-year basis.

The visitor arrivals data is collated and released by Statistics New Zealand, which is the official data agency, and it shows how many people visited New Zealand. This is significant because tourism is a key part of the country’s gross domestic product, and they are heavily reliant on visitors, which is therefore important for the health of the economy. 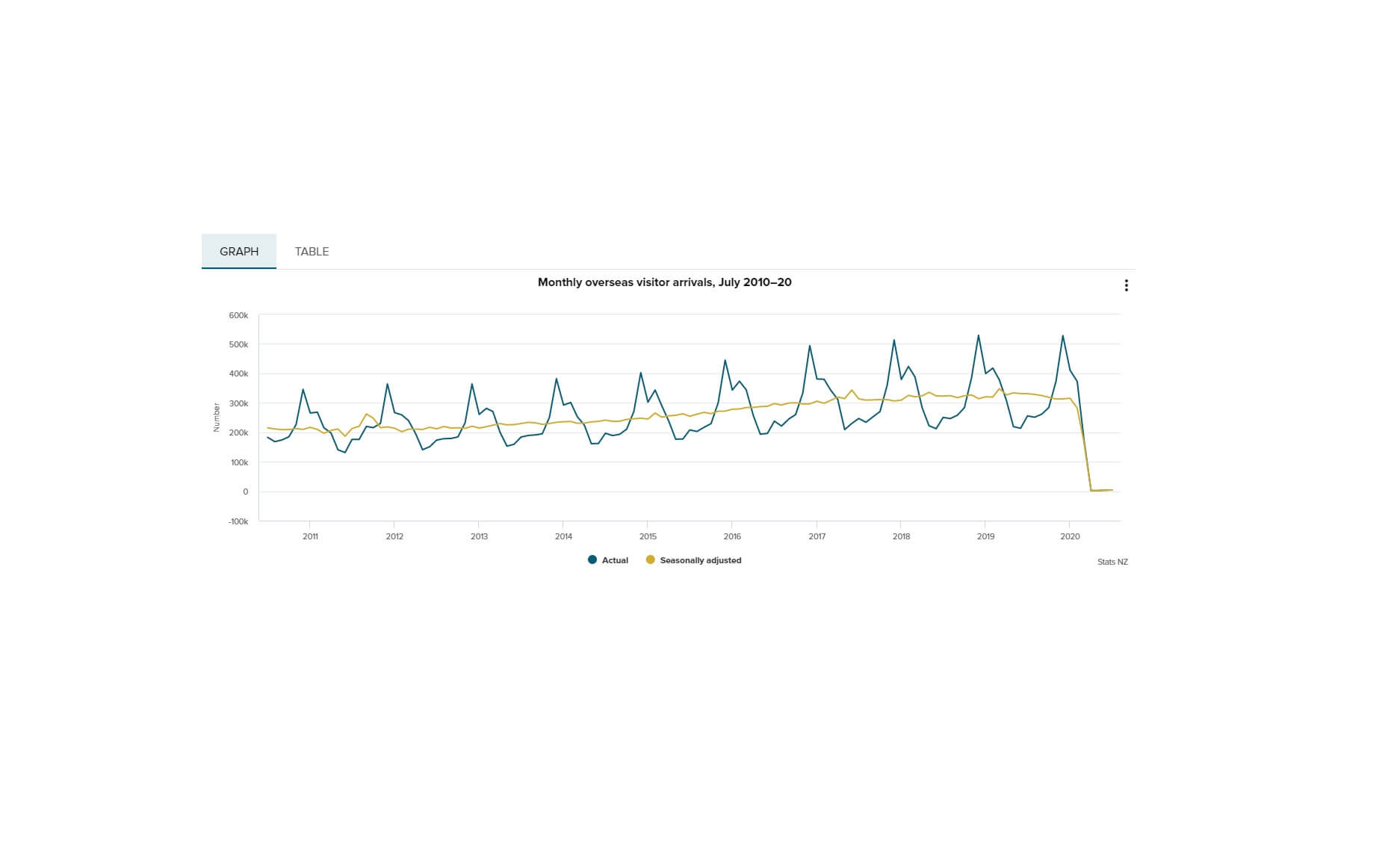 This graph from 2010 to 2020 by the SNZ shows a steady number of visitors over the years until the pandemic hit and where New Zealand closed its borders to tourism in order to protect itself from the disease. 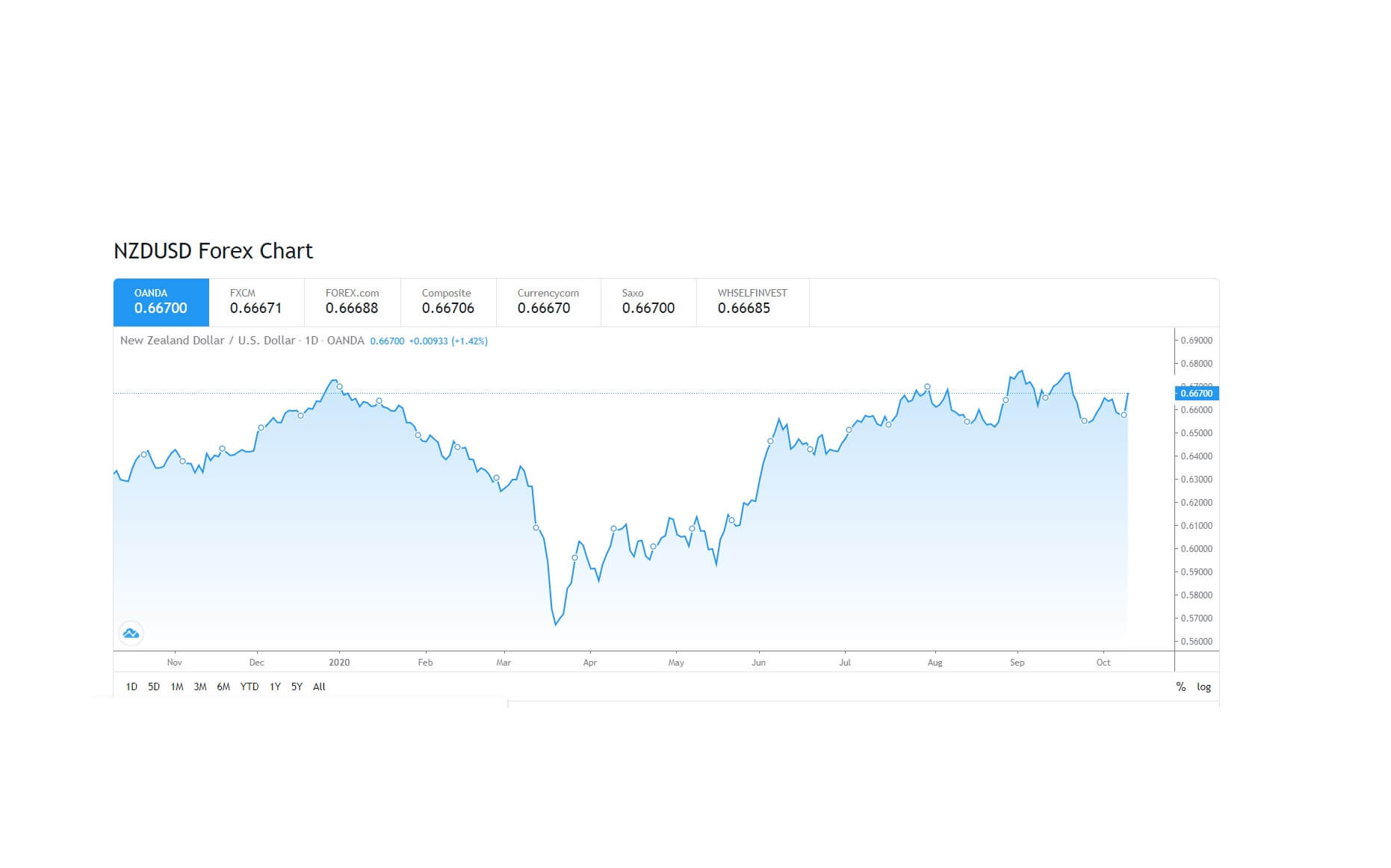 However, as previously mentioned, the New Zealand dollar is proving extremely resilient at the moment, and where we might consider that traders are confident in the government’s handling of the crisis, where the infection rate is extremely low, and where the long-term view is favorable for the New Zealand economy.