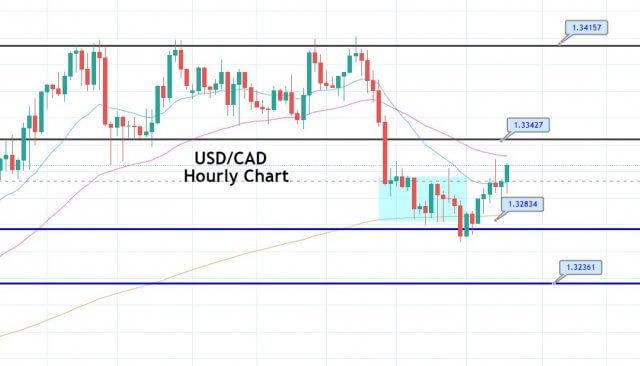 Today in the Asian trading session, the USD/CAD currency pair managed to stop its previous day bearish rally and edged higher around well above the 1.3300 level on the day. However, the bullish sentiment around the currency pair was being supported by the combination of factors, and as the broad-based U.S. dollar is back in demand on the day in reaction to a confusing end of the U.S. presidential debate, as well as the U.S. dollar gained further support after the release of upbeat U.S. macro data, which kept the currency pair higher.

Besides, the market prevalent risk-off sentiment, triggered by the latest headlines surrounding U.S. President Donald Trump’s infection of the coronavirus (COVID-19), provided a further boost to the U.S. dollar as its safe-haven status. Across the pond, the reason for the USD/CAD pair’s bullish bias could also be linked to the soft WTI crude oil prices, which undermined the demand for the loonie and contributed to the currency pair gains.

The stock market had been flashing red since the day session started and going toward ending the day with losses. Nevertheless, the reason could be associated with the U.S. policymakers’ failures to break the deadlock over the COVID-19 stimulus talks. Meanwhile. The rumors are surrounding U.S. President Donald Trump’s infection of the coronavirus (COVID-19), also weighing on the market trading tone, which tends to underpin the safe-haven assets like the U.S. dollar.

The long-lasting fight between the United States and China remain on the play as the South China Morning Post (SCMP) cites the U.S. preference for Taiwan over Beijing, which keeps fueling the relations between the United States and China. In the meantime, the market risk-off tone was further bolstered by the Financial Times (F.T.) headline, suggesting deployment of forces in Hong Kong to tame the democracy protests. This, in turn, added further pessimism around the market trading sentiment and underpinned the safe-haven assets.

The crude oil prices failed to extend its previous session winning streak and remained depressed around $38.00 marks across the pond. Nevertheless, the idea for the bearish bias around the crude oil prices could be attributed to the prevalent worries over the economic recovery after the coronavirus (COVID-19) resurgence in the U.S., Europe, and the U.K. Besides, the rise in OPEC output last month also weighed on crude oil prices. Apart from this, the currency pair’s bullish sentiment was further bolstered by the downbeat monthly Canadian GDP report, which eventually undermined the Candian dollar and extended further support to the currency pair. At the data front, the economy recorded a 3% growth in July, lower than the previous month’s 6.5% rise.

Looking forward, the traders will keep their eyes on the continuous drama surrounding the U.S. elections and updates about the U.S. stimulus package. Meanwhile, the U.S. employment data for September will be key to watch on the day.

Technically, the USD/CAD is supported around 1.3283 levels extended by a double bottom support level. On the higher side, the USD/CAD may face resistance at 1.3342 level. The USD/CAD two-hour timeframe shows a bullish signal, especially after closing the bullish engulfing candle over 1.3283 support zones. Checkout a trading plan below…