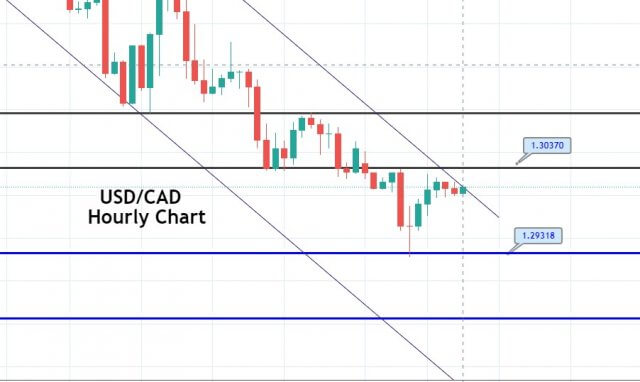 The USD/CAD pair was closed at 1.30072 after placing a high of 1.30519 and a low of 1.29281. The USD/CAD pair slipped to its lowest since mid-October 2018 on Monday as the risk appetite increased and weighed on the safe-haven US dollar that ultimately dragged the USD/CAD pair lower.
On Monday, the primary driver of the USD/CAD was the WTI Crude Oil prices that rose to $41.32 per barrel on the day after the optimism regarding the vaccine development raised in the market. The hopes for economic recovery were also raised as the vaccine news increased the chances of removing lockdowns and restrictions from the countries across the globe.

On Monday, Pfizer in collaboration with the BioNtech, announced together that their vaccine had proven 90% efficient in preventing the infection of coronavirus in its last stage clinical trials. They said that they would seek approval for their vaccine’s emergency use from the US later this month.

This news raised the risk sentiment and decreased the need for lockdowns weighing on the oil prices due to decreased demand during lockdowns. The crude oil prices surged and placed high gains on Monday that gave strength to commodity-linked Loonie that ultimately weighed heavily on the USD/CAD pair.

However, most of its daily losses were recovered after the US dollar rebounded on the hopes of no need for further stimulus measures as the vaccine had been developed. The US dollar strength drove the USD/CAD pair higher and recovered most of its daily losses. There were no macroeconomic releases from both sides s the pair continued following Pfizer and BioNtech’s latest announcement regarding vaccine development.

The USD/CAD pair is consolidating with a selling bias beneath the 1.3007 zones, disrupting the support region of the 1.3025 mark. On the downside, the bearish breakout of the 1.3025 level can extend selling bias until the 1.29720 level. Continuation of a selling bias can help us capture a quick sell trade until the 1.2972 area. So far, the MACD and EMA are neutral as the market lacks volatility. But we can expect some price action during the European session. Let’s brace for it. Good luck!