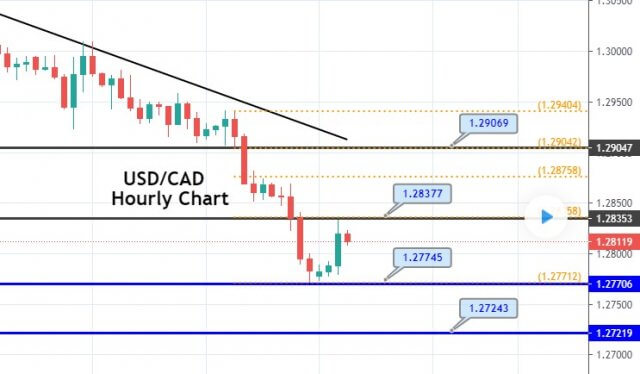 The USD/CAD closed at 1.27841 after placing a high of 1.28735 and a low of 1.27720. The USD/CAD pair extended its losses towards its lowest level since May 2018 amid the strength of the Canadian dollar against the US dollar and the rising crude oil prices. On Friday, the Canadian dollar outlook improved on the expectations that the currency will benefit from the domestic economic stimulus and the rollout of the coronavirus vaccine. On Monday, the Canadian Finance Minister Chrystia Freeland forecasted the budget deficit to hit a historic C$382 billion on coronavirus emergency aid. She also added that C$100 billion would be rolled out in stimulus once the virus came under control.

Meanwhile, the Canadian dollar was also strong because of the positive macroeconomic data on Friday. At 18:30 GMT, the Employment Change from Canada raised to 62.1K against the forecasted 22.0K and supported the Canadian dollar and added losses in USD/CAD pair.

At 20:00 GMT, the Factory Orders for November raised to 1.0% against the estimated 0.8%, supported the US Dollar, and capped further USD/CAD pair losses. Most of the US dollar economic data came in favor of the US dollar, but the NFP employment change or the job creation by the US economy fell short of expectations and weighed on the US dollar that added losses in the USD/CAD pair.

Another important factor involved in the USD/CAD pair’s losses on Friday was the rising crude oil prices. The price of crude oil, one of Canada’s major export, rose on Friday above $46 per barrel after the coronavirus vaccine’s speedy approval that would boost the global economic recovery and ultimately increase the energy demand. The higher crude oil prices supported the commodity-linked currency Loonie and added pressure on the currency pair USD/CAD on Friday.

The USD/CAD slipped to trade at a 1.2811 level, holding above an immediate support level of 1.2775. Above this level, the commodity currency pair has formed a Doji candle, suggesting odds of selling bias until the 1.2770 level. Taking a look at the 4-hour timeframe, the USD/CAD pair has closed a bullish engulfing pattern at the 1.2811 level, and it may head upward until the 38.2% Fibonacci retracement level of 1.2837 level. Bullish trend continuation can lead to its prices further higher until the next resistance level of the 1.2904 level marks a 61.8% Fibonacci level. Good luck!