Point & Figure charts are represented by a Box Size and a Reversal Amount. Boxes are represented as Xs and Os. The trader or analyst determines the Box Size. Depending on the market you are trading and the Reversal Amount, the Box Size will vary from one market and instrument to the next. I will provide a table with the box sizes I use in my trading at the end of this article. On a Point & Figure chart, Xs and Os represent price direction. Xs, often colored green, represent price moving up. Os, usually colored red, represent price moving down. 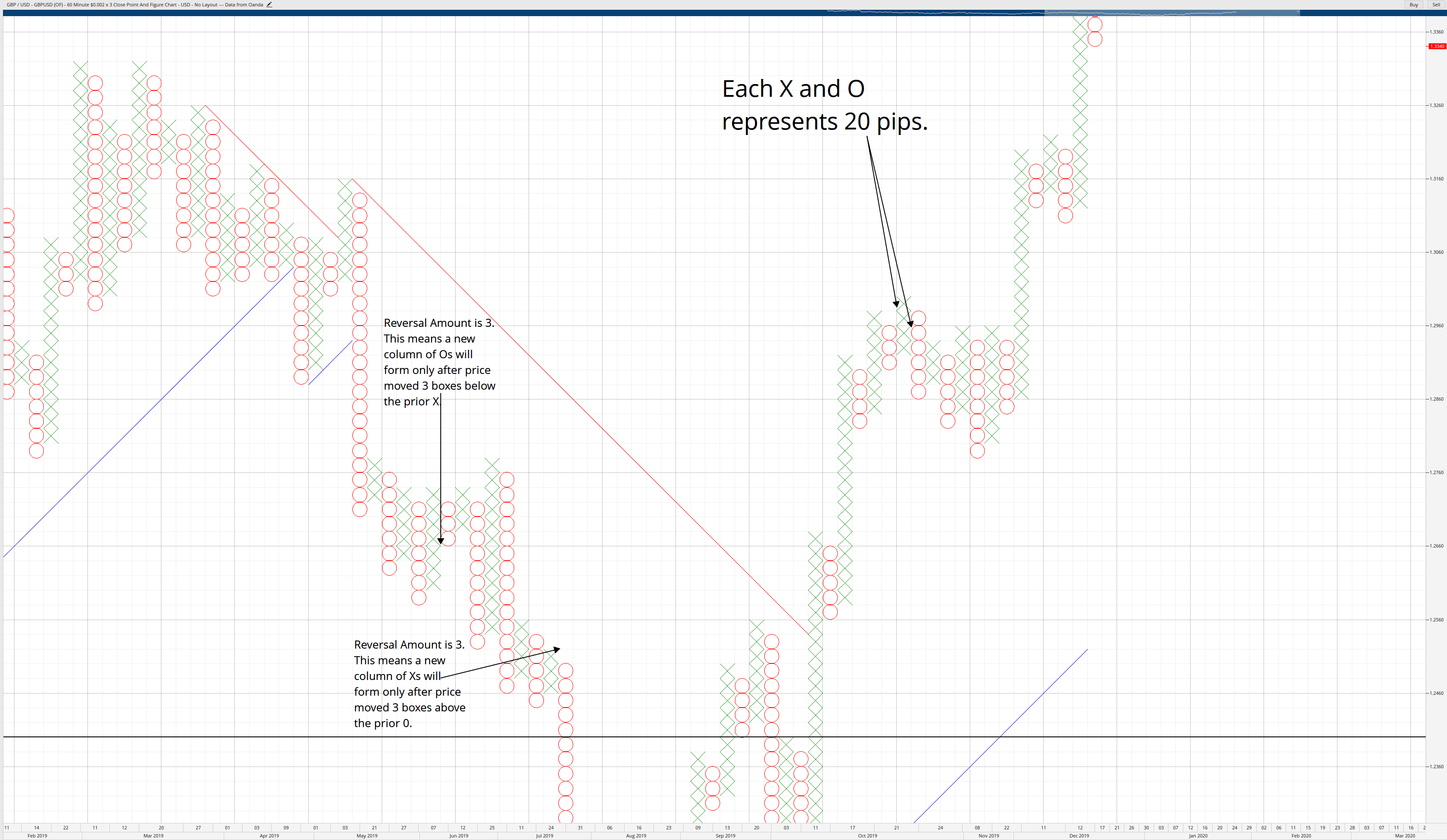 How much time does it take for a column to change from X to O?

Your transition to a price action only chart from a Japanese candlestick chart is going to continually be hampered by continuing to think that ‘time’ has someplace on a Point & Figure chart. You will look at a chart and say to yourself, ‘Well, that column of Xs has been there for a while, it can’t move anymore, it will probably reverse.’ While the concept of time is not used, some pieces of software will allow you to imprint the month on the chart where the month’s number will appear at the price level it was trading at when the month started. This can give those who are transitioning to Point & Figure as a new chart style some ‘grasp’ of time. See below.

Some traders may find having the month displayed as a benefit. Is it useful? I think so. It does at least give a sort of perspective of time and how long something has remained in a single column or how many reversals have been printed on the screen. Additionally, cycle analysis teaches that we often see some of the highest probabilities of trend changes or corrective moves occurring at the start of a new month. If we observe a new month starting near an extreme high or low, we could be looking at an imminent reversal with at least a high probability short term trade option.

Another concept that people new to a price action only chart style might find difficult to understand is that P&F charts are always in a bear or bull market. And depending on the time frames you trade on a Japanese candlestick chart, Point & Figure charts may change bull and bear trends frequently or infrequently. Two types of trendlines can be drawn on a Point & Figure chart:

Objective Trend Lines or Dominant Angles are also called 45-degree angles. Dominant angles only require one point to be drawn, and they are always drawn from O to X or X to O (in 3-box reversal charts) – and always to the column right next to eachother. The software I am using for these articles is called Optuma by Market Analyst. In Optuma’s software, they auto-draw some of the dominant trend lines. Subjective trendlines are drawn the same way you would draw any other trendline on a Japanese candlestick chart. I rarely, if ever, utilize subjective trendlines. In some of the strategies I will go over, the dominant/45-degree trendlines are useful in determining the direction of the trading you should take.

There is one primary rule that must be followed when trading on Point & Figure charts.

Only Enter Trades After Multipletops/Multiplebottoms have been broken.