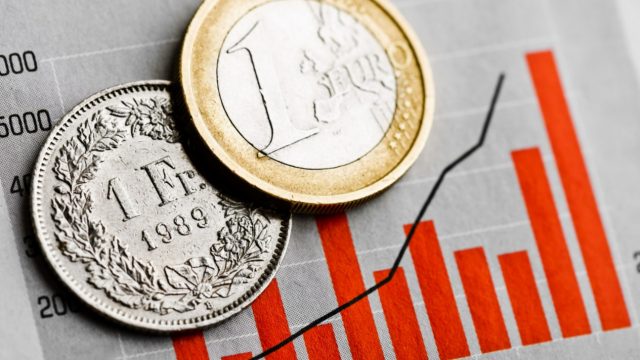 In this analysis, we will look into endogenous economic factors that influence Australia and Switzerland’s growth. We will analyze factors that affect the fluctuation of the exchange rate of the AUD/CHF forex pair.

Domestic currency increases in value when the endogenous factor has a positive score and depreciates if it is negative. Similarly, the AUD/CHF exchange rate rises if the exogenous score is positive and drops if negative.

In Switzerland, the labour market is made up of Swiss citizens aged 16 to 65 years. The number of unemployed persons includes those who are available for work but could not get employed during the survey period. Note that the number of unemployed persons does not cover those working temporarily and must include those who have made efforts to seek gainful employment within four weeks. This number shows the prevailing economic situation in Switzerland since employment levels correspond to economic growth.

In November 2020, the YoY Swiss PPI  dropped by 2.7% compared to a 2.9% drop recorded in October. This is the 23rd consecutive drop in the PPI. However, it was the slowest drop since March indicating that domestic demand is picking up. It has a score of -3.

This tracks the percentage change in the ratio of actual industrial production in Switzerland and the maximum potential output. This ratio shows the rate at which the Swiss industries utilise the available resources. Typically, when the capacity utilisation rate increases, the output in the Swiss industrial sector also increases. This corresponds to economic expansion and improved living standards.

This is the ratio between the amount that Swiss households save to their disposable income. In an economy, when the savings rate is high, domestic consumption takes a hit. Since a higher household savings rate corresponds to a drop in domestic demand, it leads to a decrease in GDP growth, and vice versa.

In 2020, Switzerland household saving rate is projected to hit 15.4%, which would mark the highest level in Switzerland’s history. It has a score of  -5.

This index tracks the change in the quarterly change of the price of single-family homes. Price change in the real estate sector is a leading indicator of overall economic growth. Residential property increases in price due to rising demand, which means there is access to affordable financing or increased disposable income.

In Q3 of 2020, Swiss housing price index increased to 172.82 points from 169.22 points in Q2. Throughout 2020, the Swiss HPI has remained above the historic average of 106.48 points. This shows that domestic residential property did not take a hit as a result of the coronavirus pandemic. It has a score of 1.

This measures the totality of expenses by the Swiss government. They include expenditure on goods and services, public investment, and transfer payments. Note that fiscal expenditure is a primary method for the government to influence the economic growth rate.

In 2019, the Swiss government’s fiscal expenditure increased to 224.309 billion CHF from 221.715 billion CHF. It is projected to hit an all-time high of 235 billion CHF in 2020 due to unprecedented fiscal expansionary measures to combat the pandemic. It has a score of 3.

This measures the number of companies operating in Switzerland that are forced to close down due to the inability to service their debt obligations. Typically, the number of bankruptcies increases when the economy is performing poorly.

A country’s terms of trade are derived from dividing the value of its exports with its imports. Thus, a country with a surplus net current account balance has terms of trade above 100%. Conversely, when its balance of payments has a deficit, the terms of trade will be below 100%.

When this differential is positive, Australia has a higher annualised GDP rate than Switzerland. Since the AUD will subsequently appreciate more than the CHF, we can expect a bullish trend for the AUD/CHF pair. Conversely, if the Swiss economy has a higher annual GDP growth rate, then the differential will be negative. Consequently, the AUD/CHF pair has a bearish trend.

In 2020, the Reserve Bank of Australia cut interest rates from 0.75% to 0.1% while the Swiss National Bank maintained interest rate at -0.75%. Therefore, the interest rate differential for the AUD/CHF pair is 0.85%, and it has a score of 5.

The cumulative exogenous score for the AUD/CHF pair is 3, which implies that we can expect the pair to continue trading on a bullish trend. The pair’s weekly chart’s technical analysis shows it is attempting to break through the upper Bollinger band. Furthermore, it has formed a series of bullish ‘hammer’ candles meaning that sellers have failed to drive down the exchange rate.