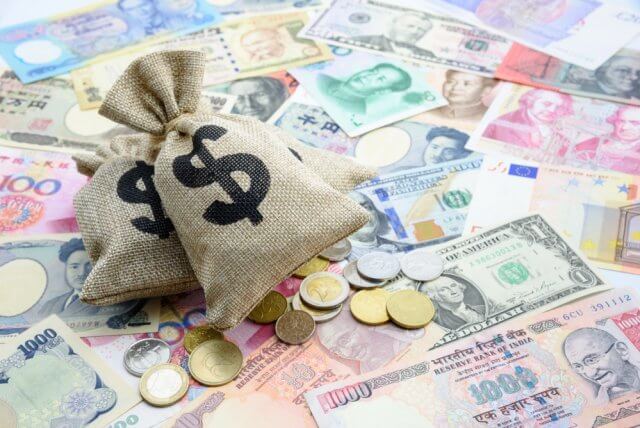 With the advent of Globalization, nations started collaborating, and economies began to develop and grow at a faster pace. In today’s modern world, Foreign Direct Investment is one key result of Globalization. FDI is very helpful for boosting the pace of economic growth for emerging nations like India, China, and Japan, etc. Understanding this phenomenon and its long and short term impacts can help investors, economists, and traders predict long term economic trends and make critical investment decisions.

What is Foreign Direct Investment?

An individual or a corporation investing and owning at least ten percent of a foreign company is called Foreign Direct Investment. When a growing company decides to invest in a business outside of its own country for expansion or increasing revenue purposes, it is called FDI. If the investment is less than 10 %, then it is treated as a stock portfolio.

When an investor owns equal to or more than 10%, it does not give him a controlling interest but allows the investor to influence the company’s running operations. The investor’s proposals, views, and opinions are taken into account in the management’s actions and policies. For this reason, the governing bodies of the nation track the FDI in their country’s business.

FDI is implemented in one of two ways:

Greenfield Investment: This is a process when a company decides to expand its operations globally in the form of franchises. A typical example would be that of the McDonald’s franchise, and they expand their operations by taking care of building and operating the franchise from the ground-up.

Brownfield Investment: It occurs through mergers and acquisitions, where a company acquires or merges with an already established company in another country. A recent example would be that of Tata Motors of India bought the Ford’s Land Rover and Jaguar. FDI is also categorized as Horizontal and Vertical FDI. A horizontal FDI is when a company invests in the same business in another country.

In contrast, a vertical FDI is when a company invests in another company that supplements the existing business operations. For example, if a car manufacturing company acquires a transportation company for its manufactured car transports, it is a Vertical FDI.

How can the Foreign Direct Investment numbers be used for analysis?

FDI is beneficial for the investors as it helps them to diversify their portfolio, meaning that their income sources are varied. The advantage would be that if their country or any of their invested company’s country is facing a political tension or recessions, it does not cripple their income as the other sources of their investments make up for these losses. Investor’s golden rule: “Do not keep all eggs in one basket” is applicable here.

If the investor is a corporate company, they might choose to acquire or merge with another company to enhance and trade each other’s expertise. Emerging economies have open trade policies and loose tax rules compared to developed nations, which is very attractive for foreign investors as they get a higher yield on their investment. Lower wages and higher than average growth are key benefits of investing in emerging businesses.

Developed and mature companies offer their expertise, resources, and funds to emerging businesses to generate lasting interests and a long-term partnership. This adds to the revenue of the mature companies and boosts the growth of the developing economies as they experience increased fundings, support. This leads to improved standards of living in emerging economies.

A typical example would be the IT boom in India when the silicon-valley tech giants started expanding their operations onto the southern parts of India that gave a massive boost in employment and wage growth in India. Today, cities like Bangalore and Hyderabad have become Indian silicon-valleys with such rapid FDI.

The FDI is susceptible to trade laws, taxation rules, political situations, and ease-of-doing-business factors. For example, The recent decreasing trend in the global FDI is mainly due to President Donald Trump’s Tax cut that led to major companies to repatriate their foreign accumulated wealth back. 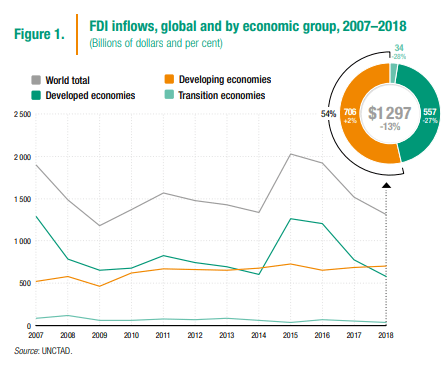 In the initial stage, a definite rise in GDP is seen because of the FDI itself, but that is followed by a positive amplifying effect later, which is higher than the initial injected FDI. Increased jobs, productivity, and efficiency due to access to sophisticated technologies and management from the investing companies all promote growth. All this is appreciating for the economy and hence, the currency of the FDI receiving economy.

Developed economies may be resilient towards decreased FDI, but developing nation’s GDP rates fluctuate on a greater magnitude based on FDI changes. Emerging economies need the funding and expertise offered through FDI to boost their economy.

The FDI numbers are representative of long term growth, and the boost or slow down may be apparent only after certain months or years. The FDI trails news releases associated with trade agreements or press releases from companies and hence is a lagging or reactionary indicator for traders. It is more helpful for economists and analysts of the Governments to assess their economic growth.

The crucial factors in the economic growth of any country are the commercial transactions and Foreign Direct Investment (FDI). The FDIs increase the exporting capacity in the host country and lead to an increase in profit at the foreign exchange market. There is widespread belief among international institutions, researchers and, policymakers that FDI has a great impact on the economic growth of a country. Thus, every country puts out various measures and schemes to boost Foreign Direct Investment in the country and increase the buying pressure on the currency.

In this section of the article, we will study the impact of FDI announcement on the value of a currency and examine the change in volatility. For this, we will be analyzing the year-on-year FDI data of Canada, where the latest data available with us are the investments by foreign institutions in the year 2018. The below image shows that FDI rose by $42,099 million dollars in 2018 compared to the previous year. Let us find out the reaction of the market.

Note: It is worthwhile to mention here that the FDI news announcement was followed by another major news event, which has a significant impact on the currency. Therefore, during continuous news announcements, markets should be analyzed based on collective volatility and not just single data.

Let us first look at the EUR/CAD currency pair, where, in the above chart, we see that the volatility has increased on the downside, which could possibly turn into a reversal. If the news announcement turns out to be negative for the Canadian economy, the price can shoot up, thereby ruling out the reversal of the trend. However, a positive news outcome is an ideal case for going ‘short’ in the pair. But we should not forget about another news announcement right after the FDI. However, the FDI release will always be not be accompanied by a news release, and thus the above explanation holds in such cases.

After the FDI data is released, we see that the market crashes below, and there is a sudden drop in price. This is the result of the positive FDI data for the current year, where there was an increase in Investments by foreign institutions. The bearish candle indicates that the FDI data was bullish for the Canadian dollar, and traders were delighted with the data. One should trade the pair after the volatility settles down after the continuous news announcements.

The above images represent the USD/CAD currency pair. Before the announcement, the market is an uptrend indicating weakness in the Canadian dollar. As the uptrend is very strong, one should be cautious before taking a ‘short’ trade in the pair as there are high chances that the news announcement may result in a spike below and not a reversal of the trend.

After the news announcement, we see that there is a drop in price, but the market does not collapse. The possible reason for low volatility after the release is that the market was expecting better FDI data and also due to the prevailing uptrend. One should go ‘long’ in the pair after the market shows signs of trend continuation.

Lastly, we discuss the impact of FDI on CAD/JPY currency pair, where, in the first image, we see that the market is in a strong downtrend, pointing towards weakness in the Canadian dollar. As the Canadian dollar is on the left-hand side of the pair, in order to buy the currency, one should go ‘long’ in the pair, unlike in the above pair. Only if the positive FDI data is able to cause a perfect reversal of the trend, one can buy the currency pair else should trade with the trend.

After the announcement, the market moves initially moves higher owing to upbeat FDI data but gets immediately sold into and closes as a bearish candle. Thus, we can say that the impact was least on the pair, and there was no considerable change in volatility.

That’s about ‘Foreign Direct Investment’ and its impact on the Forex market after its news release. If you have any questions, please let us know in the comments below. Good luck!