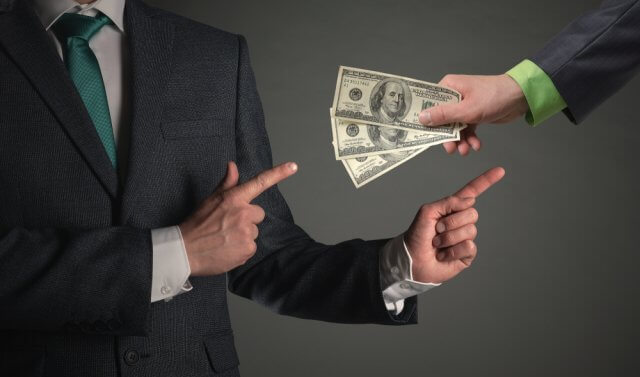 The Corruption Index focusses on the public sector and evaluates the degree of corruption among public officials and politicians. In highly corrupt countries, the judiciary’s quality and independence are usually low, and official statistics try to underestimate the level of corruption to hide the bitter truth. The international agencies are a valuable alternative source of information to report the extent of illegal practices being done by civil servants and politicians in a given country.

Impact of corruption on the economy

Most economists view corruption as a key obstacle to economic growth. It is seen as one of the reasons for low income and plays a critical role in generating poverty traps. It prevents economic and legal systems from functioning properly. Other effects are a misallocation of talent or human development, reduction in the incentive to accumulate “capital.”

Corruption hampers development by allowing agents to interfere in the usual functioning of the government. Economists believe that corruption is like a competitive auction; those who want a service, use the power of money to get it, and the result is an inefficient allocation of resources. The resources get used by people who do not deserve or are not meant to use it.

Contrary to this idea, some people argue that corruption ‘greases’ the wheels of development and that foster growth. The main idea is that corruption facilitates beneficial trades that otherwise would not have taken place. In this way, it promotes productivity by allowing individuals in the private sector to correct or avoid government failures of various sorts.

The index has been criticized lately based on its methodology used for ranking countries. Political scientists find some flaws in the way the corruption index is calculated. These flaws include:

Corruption index is an important economic indicator that most economists and money managers look at before making investments. In recent times, it is making a huge impact on the economic development of a country. Thus, we need to understand how the data is analyzed. By comparing the two countries’ rankings, one can determine which of the two economies is stronger and enjoying investor confidence.

While analyzing the data, it important to keep in mind that economies of the same stature should be compared. We cannot compare the ranking of a developed country with that of a developing country. This is because corruption has a much greater impact on the growth rates of developing countries.

Public corruption in emerging countries, especially, contributes to currency crises and put a major dent in the development of the country. Corruption acts repel stable forms of foreign investment and leave countries dependent on foreign bank loans to finance growth. Foreign investors refuse to put their money in developing countries where, for example, local bureaucrats accept bribes, and the government has been known to fall prey to businesspersons and builders.

A corrupt government may be undesirable for foreign direct investment (FDI), but it may not be equally disadvantageous when it comes to obtaining loans from international creditors. This is because governments of most countries offer considerably more insurance and protections to lenders than to direct investors. The result is a country with high debts and no foreign investment. Such an imbalance leaves an economy much more vulnerable to currency crises.

Sources of information on Corruption Index

The Corruption Index is published annually by Transparency International since 1995, which ranks countries by their perceived levels of corruption in the public sector. Transparency International is the official agency that keeps track of the corruption activities and wrongdoing of the government, which is reflected in the rankings. However, other economic websites measure corruption based on their parameters and factors. They also provide a statistical comparison of different countries with a clear graphical representation.

The corruption index is gaining a lot of attention and importance around the world. Corruption decreases the amount of wealth in a country and lowers the standard of living. The economic impact of corruption is measured in two ways, first, the direct impact on the GDP growth rate and, secondly, an indirect impact on human development and capital inflow. The new methodology used by Transparency International uses four basic steps, including the selection of data, rescaling source data, aggregating the rescaled data, and a statistical measure indicating the level of certainty. The data collection and calculations are done by two in-house researchers and academicians.

Impact of Corruption Index’s news release on the Forex market

The Corruption Perception Index (CPI) scores countries on how corrupt a country’s public sector is perceived to be by experts and business executives. It is a composite index, which is a combination of 13 surveys and assessments. The data is collected and compiled by a variety of reputed institutions.

The CPI is the widely used indicator of corruption all over the world. The corruption index is closely watched by investors who take investment decisions based on the ranking. However, it has a long-term impact on the currency, and the effect may not be seen immediately after the official news release.

In this section of the article, we will observe the impact of the CPI announcement on different currency pairs and witness the change in volatility due to the news release. For that purpose, we have collected the CPI ranking of Japan, where the below image shows Japan’s corruption score and rank in 2019. A score above 50 indicates low corruption levels and that the country’s government is clean.

Let us start our analysis with the USD/JPY currency pair and analyze the reaction of the market. The above image shows the daily time frame chart of the forex pair before the news announcement, where we see that the market is moving in a ‘range’ with the price at the top of the range. We will look to take a ‘short’ trade once we get confirmation from the market.

After the news announcement, volatility increases to the downside, and the price falls drastically. The market reacted positively to the news data, where we see that the Japanese Yen gains strength after the news release. As the corruption index score was positive, traders strengthened the currency, as indicated by the large bearish ‘news candle.’

The above images represent the GBP/JPY currency pair, where we see that before the announcement, the market is in a strong uptrend, and recently the market has shown signs of reversal. We should be looking to sell the currency pair if the market is not able to move higher. However, we should wait for the news release to get a clear idea of the direction of the market.

After the news announcement, the market reacts similarly as in the previous currency pair, where the price moves lower and volatility expands to the downside. As the CPI data came out to be positive, traders sold British Pound and bought Japanese Yen, thereby strengthening the currency. At this moment, one can take risk-free ‘short’ trade with a stop loss above the ‘news candle.’

Lastly, we will find out the impact on the AUD/JPY currency pair. The first image shows the characteristic of the chart before the news announcement, where it appears that the price is moving in a channel. One needs to be cautious before taking a ‘short’ trade as the price is at the bottom of the channel.

After the news announcement, the market gets a little volatile where we see that the price moves in both directions and finally closes near the opening. The overall reaction was bullish for the currency due to the healthy CPI data. The ‘news candle’ is not enough to confirm that the market is going lower as it has lower wick on the bottom, indicating buying pressure.

We hope you understood what ‘Corruption Index’ is and the impact on the Forex market after its news announcement. Cheers!