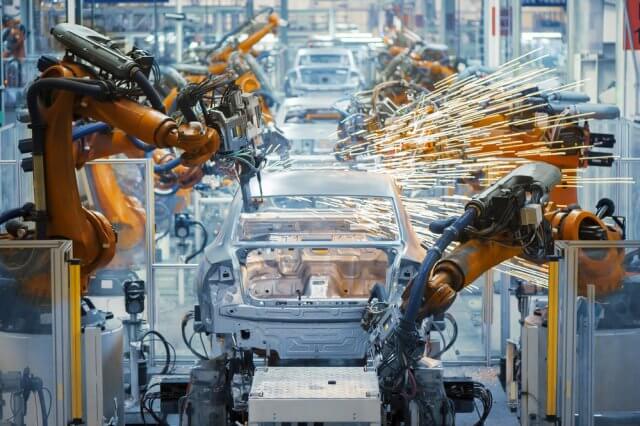 Before the Service sector dominated the Industrial sector as a significant contributor to the GDP, it was the industrial production alone that was seen as a measure of economic growth. It still holds for many developing economies. Economies like China, Japan, India, etc. all had significant industrial revolutions that helped their countries to improve their economy. The industrial sector still contributes a considerable percentage to the economy and employs millions of people.

What is Industrial Production MoM?

The Industrial Production Index goes as back as 1919 if required, and is published by the Board of Governors of the Federal Reserve System in the United States. The extended time-frame availability of data makes it a more robust, reliable economic indicator as more data points are available relative to other sectors.

The data is aggregated by combining data in different units. Some of the data may be in dollar terms, some may be in tonnes (e.g., the weight of barrels of oils and steel), or inferred by the number of hours worked. The logged-in hours are obtained from the Bureau of Labor Statistics. It is expressed as a percentage of real output relative to a base period. The base year is currently 2012. The methodology incorporated to calculate the Industrial Production is the Fisher Ideal Index, where the contribution of each sector is weighted (the higher the contribution, the higher is the weightage in the index calculation).

Industrial Production Indices comes in YoY and MoM versions comparing production size with the previous year and month, respectively. The YoY figures deem more use to analysts and government officials to analyze the performance of the industrial sector for this financial year. The MoM (Month over Month) figures are useful for closely monitoring for the expected uptrends or downtrends during business cycles. The MoM figures are more useful for investors in this regard.

How can the Industrial Production MoM numbers be used for analysis?

We have to understand the significance of this statistic historically. Before the development of the service sector, i.e., before the era of computers and the internet, the most industrialized countries were the most advanced economies. Countries that had many factories manufacturing tons of commodities were seen as highly advanced economies back in the day. Hence, it is no surprise that at such times the Industrial Production figures were a direct measure for the economy’s economic activity and growth.

For the United States, the Industrial Sector now contributes less than 20% to the overall GDP, while more than 80% comes from the Service sector itself. Although it may sound like only 20%, it is only in comparison, but individually the industrial sector is in itself huge and employs millions of people. 15-20% is still a significant contribution, and that is the reason why it is still being published as well as analyzed by investors, traders, analysts frequently to infer significant economic conclusions.

With machine automation, the advancement of technologies, and the introduction of artificial intelligence, many traditional jobs in the industrial sector are getting replaced. This trend is likely to continue further down the line. As of now, the Industrial Production figures bear some relevance, though it is only a matter of time that its contribution further falls and is overlooked by investors and analysts.

The industrial sector is more sensitive to business cycles as well as economic shocks, as evident from the historical plot. The current COVID-19 pandemic has had a more significant impact on the industrial sector than the service sector due to the nature of business.

Since the Industrial Production figures only account for a few sectors of the economy, hence it is not a macroeconomic indicator encompassing all industries into its statistics. For this reason, the relative significance of this indicator in the currency markets is less. Whereas, investors looking to invest in stocks of companies belonging to the Industrial sector use Industrial Production MoM figures to make investment decisions. Overall, it is a low-impact coincident indicator that bears no significant volatility in the currency markets but has a significant influence on the equity markets.

The Board of Governors of the Federal Reserve System publishes reports of the Industrial Production statistics as part of its monthly “G.17 Industrial Production and Capacity Utilization” report on its official website. It is released around the 15th of the month for the previous month. It is a preliminary estimate and is annotated with a superscript ‘p’ in the tables. It is subject to revision in the subsequent five months as more data becomes available. The report details both seasonally adjusted and unadjusted versions for our convenience.

In the US, the monthly industrial production data is released by the Federal Reserve about 16 days after the month ends. It measures the change in the total inflation-adjusted value of output produced by manufacturers, mines, and utilities. The most recent data was released on August 14, 2020, at 9.15 AM ET and can be accessed at Investing.com here. An in-depth review of the industrial production data release can be accessed at the Federal Reserve website.

The screengrab below is of the monthly industrial production from Investing.com.

As can be seen, the industrial production data is expected to have a low impact on the USD upon its release.

Before the data release, the EUR/USD pair was trading in a renewed uptrend with the 15-minute candles forming above a steadily rising 20-period Moving Average. This pattern indicates that the USD was weakening against the EUR.

As expected, the pair formed a 15-minute bearish candle after the data release indicating a  momentary strength in the USD. The data was, however, was not significant enough to bring forth a change in the trading pattern. The pair continued trading in the earlier observed uptrend with the 20-period Moving Average steadily rising.

Similar to the trend observed with the EUR/USD pair, the NZD/USD was trading in an uptrend before the data release. The 20-period Moving Average can be seen to be steadily rising in the above 15-minute chart.

After the data release, the pair formed a 15-minute bearish candle. As observed with the EUR/USD pair, NZD/USD continued trading in the earlier observed uptrend with the 20-period Moving Average steeply rising.

The monthly US industrial production data an important leading indicator of the economy’s health. From this analysis, however, while the data release affects the USD, it is not significant enough to cause a shift in the prevailing market trend.