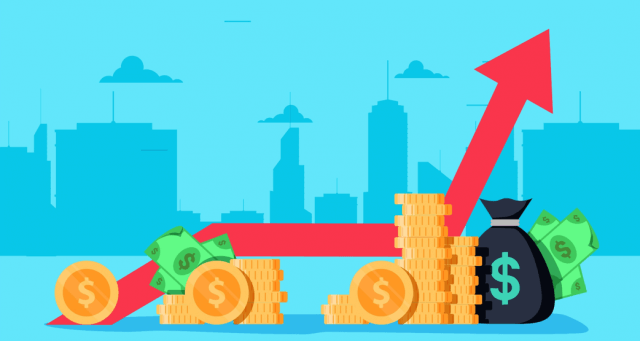 Apart from inflation, gross domestic product growth is one of the most closely monitored macroeconomic statistics. This interest in the GDP growth rate is because GDP is one of the leading indicators of economic health in any country. Therefore, apart from understanding how the GDP growth rate impacts a nation’s economy, forex traders must comprehend how it affects the exchange rate.

GDP: A country’s gross domestic product is the monetary measure of the entirety of goods and services that have been produced within an economy over a specific period. The formula for calculating the GDP for a country is summing up the households’ consumption expenditure, expenditure by the national government, spending by businesses, and the net value of exports. The fact that the GDP covers the entire expenditure within an economy makes it a robust leading indicator of economic health.

How the GDP Annual Growth Rate is Measured

The second method for calculating the annual GDP growth rate is by comparing the rate of change from a given quarter with that of the same quarter in the previous year.

How the GDP Annual Growth Rate can be used for analysis

Governments and central banks formulate their policies around the GDP growth numbers. When the YoY GDP is falling, expansionary monetary and fiscal policies that will be implemented. A falling GDP is an indicator that the economy is heading to higher levels of unemployment; reduced wages; and a general reduction in aggregate demand and supply. Therefore, to avoid recession, expansionary policies like a reduction in interest rates are introduced. These measures are reducing the cost of borrowing, which in turn leads to increased expenditure by households, businesses, and the government.

Conversely, a rapidly increasing growth rate of the annual GDP signifies that the economy is performing well. This economic prosperity translates to a higher rate of employment, higher wages; increased levels of investment and re-investments; and higher aggregate demand and supply within the economy. However, although an increasing GDP is good, a rapidly increasing annual growth rate could forebode an overheating economy.

An overheating economy is one that is experiencing an unsustainable period of prolonged economic growth. This prolonged growth risks high levels of runaway inflation in the economy due to the continually rising wages. More so, an overheating economy results in inefficient allocation of the factors of production since producers oversupply the economy to take advantage of the higher prices. These inefficiencies are likely to result in a nationwide economic recession.

To prevent the effects of an overheating economy, the government and central banks will implement contractionary monetary and fiscal policies. They include a reduction in government expenditure and increasing the interest rate. These policies will help slow down the rate of inflation and increase the cost of borrowing, effectively reducing the aggregate demand.

Therefore, the YoY GDP growth rate provides an important metric for the relevant authorities to ensure that the economy is progressing at a sustainable pace. Furthermore, it is a way for the governments and central banks to gauge the effectiveness of the policies put in place.

Forex traders keenly follow the changes in fundamental economic indicators to establish whether there will be a future hike or cut in the interest rate. A falling annual GDP growth rate is accompanied by expansionary monetary policies such as a reduction of the interest rate. This cut tends to depreciate a country’s currency. Therefore, a falling annual GDP growth rate is negative for the currency.

The statistics on global GDP annual growth rate can be accessed at Trading Economics and The World Bank.

The screengrab below is of the annualised QoQ GDP growth rate from Forex Factory. On the right of the image is a legend that indicates the level of impact it has on the AUD.

As can be seen, both the annualised QoQ GDP growth rate data is expected o result in a high impact on the AUD.

In the 2nd quarter of 2020, the Australian economy contracted by an annualised rate of 7% compared to a 0.3% contraction in the first quarter. This contraction was worse than analysts’ expectation of 6%. This contraction is expected to depreciate the AUD relative to other currencies.

Let’s now analyse the impact made by this release on the Forex price charts of a few selected pairs.

From the above 15-minute chart, the AUD/USD pair was trading in a neutral trend before the data release. This trend is evidenced by candles forming just around an already flat 20-period Moving Average. However, 30 minutes to the news release, the pair adopted a steep downtrend forming two long bearish candles with the 20-period MA falling.

After the data release, extreme volatility is observed. As expected, the pair forming a long 15-minute bearish candle due to the weakening AUD. The 20-period MA continued to fall steeply even though the pair started recovering from the worse than expected data release. Subsequently, the steepness of the 20-period MA subsided.

The GBP/AUD pair traded in a similar pattern as observed with the AUD/USD pair before the annualised GDP data release.

As expected, after the news release, the pair formed a long 15-minute bullish candle due to the weakening AUD. As with the AUD/USD pair, the GBP/AUD pair underwent a period of correction with the 20-period MA flattening and the subsequent candles forming lower than the news candle.

Like the other pairs, the EUR/AUD pair traded within a neutral trend with a significant shift in the trend immediately before the GDP data release. Like the GBP/AUD pair, the EUR/AUD pair formed a long 15-minute bullish candle after the news release due to the worse than expected data.

The above analyses have shown that the GDP annual growth has a significant effect on price action. The period of relative market inactivity before the data release indicates that most forex traders avoid opening any new, significant positions until the data is released.