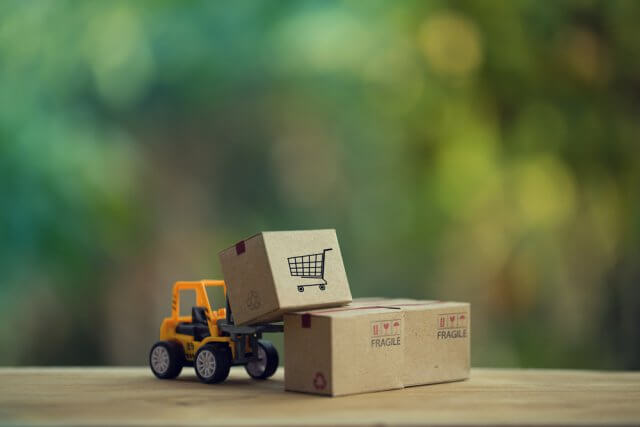 Export is an essential component of a country’s balance of trade. International trade is the heart of the FOREX market that constitutes the fundamental moves in currency pairs. The imbalance in various country’s balance of trade is offset by equal and opposite volatility in currencies. Hence, understanding the macroeconomic dynamics of trade relations, compositions, and how they are tied to currency values can deepen our fundamental analysis.

What are Exports by Category?

Export: It is the sale of domestically produced goods or services to the foreign market. If goods manufactured within the nation are sold to customers outside the country’s borders, it is referred to as an export. On the other hand, imports are the purchase of foreign goods or services by a country. Generally, a country exports a particular commodity because it either efficiently manufactures or is more capable than the importing country.

A country like Canada, which has abundant oil reserves, can export to countries like China, which has a massive demand for its industrial economy. Similarly, China may export electronics to other countries like the United States, as they have a competitive edge in that domain. Exports bring domestic currency into the country in exchange for produced goods and services. Imports bring in goods and services into the country and send out the domestic currency. Hence, countries must maintain a “balance” in its international trade to keep currencies in an equilibrium.

How can the Exports by Category numbers be used for analysis?

If a country’s exports exceed its imports, it is said to have a trade surplus or a positive balance of trade. On the contrary, if a country’s imports exceed its exports, it is said to have a trade deficit or negative balance of trade. Imports signify consumption, and exports signify production. In a perfect world, the trade balance would be zero, meaning a country would produce equal to what it consumes. In reality, the balances are skewed and change from time to time.

When a country exports, it accumulates wealth. Many developing economies like China have increasingly depended on exports for their economic growth. By investing heavily in optimizing its industries and resources, many developing economies could export goods at a lower price to developed economies. A trade surplus (exports exceeding imports) is generally seen as beneficial to the economy. Prolonged periods of trade surplus, drains the international market of that country’s currency, thereby increasing its valuation against other currencies.

When a currency valuation appreciates imports become cheaper as more goods can be procured per unit of currency. In general, a trade surplus is seen as beneficial, but it may not always be the case. For instance, a country might increase its imports of construction materials to develop its cities and state infrastructure. During this time, it may have a trade deficit, but later once the work is done, its exports may improve beyond its previous highs and pay off for the years it maintained a deficit.

Countries export and import in millions and billions of dollars. When a country exports goods, it does so in large quantities, and the corresponding transaction would also be significant. Such transactions amongst countries with different currencies need to be exchanged. Such exchanges in the international FOREX market occurring for fundamental reasons sets off the equilibrium.

By the natural market forces through demand and supply, currencies will come to a new equilibrium. The movement in currency values through such fundamental moves is accompanied by speculative transactions from investors and traders worldwide. Approximately 20% of all FOREX transactions occur for pure fundamental reasons while remaining occurs for speculative purposes.

Understanding the portfolio of exports a country has can help us get a fundamental idea about the underlying goods and service exports that influence currency moves. For instance, Australia depends heavily on Iron Ore exports (approximately 20%). The Iron exported is sold mainly to China and Japan. If business activity in China reduced because of some reason, a decrease in demand would reduce exports for Australia, followed by a corresponding drop in AUD currency value.

The below image depicts how AUD value against USD follows Iron Ore prices. Hence, countries that depend on fewer exports experience higher volatility than countries with a more diverse portfolio of export and imports. 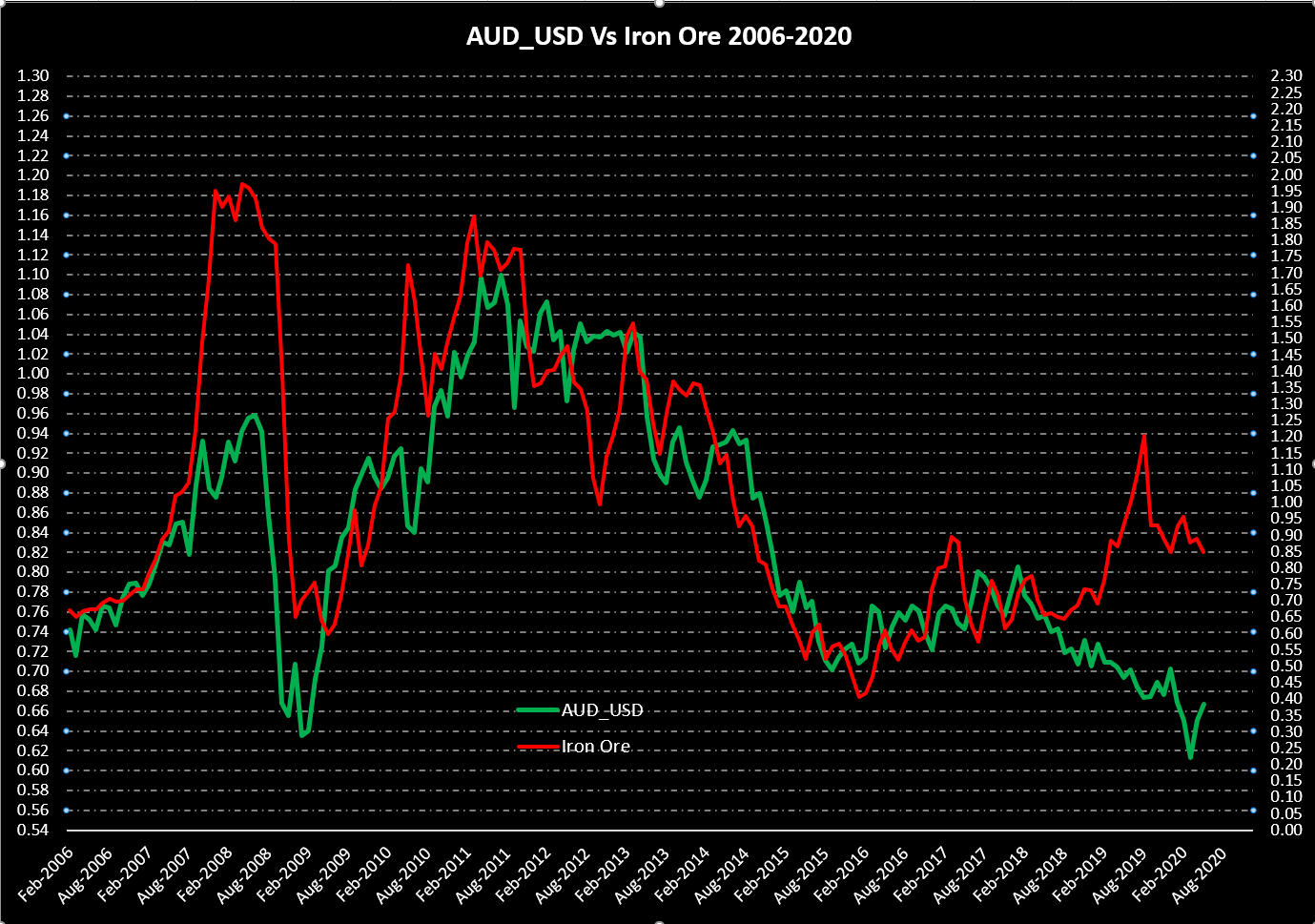 The ‘Exports by Category’ is not an economic indicator but is an essential statistic to understand the country’s trade relations. The composition of exports of a country does not vary significantly every month as exports and imports are based on trade agreements and business contracts that generally last years at a stretch. Exports by Category can be used to identify which goods and services are potential influencers for currency volatility. Hence, overall it is an essential requisite for fundamental analysis but not an economic indicator.

For the United States, the Census Bureau tracks all the import and export statistics on its official website. The international trades categorized based on trade partners and Categories of goods and services are also available.

Sources of Exports by Category

The Census Bureau’s International Trade Data, the Export & Import by Trade Partner, Foreign Trade has all the necessary details. Consolidated reports of Exports by Category for most countries is available on Trading Economics.

Exports by Category News Release – Impact on the Currency Market

We know that Exports is an important fundamental driver of an economy, that can significantly impact a nation’s currency. Digging deep into Exports, we can widen the heading into Exports by Category and Exports by country. In other words, the result of the two is reflected in the Exports data.

Exports by Category, not being an economic indicator, barely has any impact on the currency of an economy. Moreover, the data is based on trade contracts, due to which the numbers do not change often. Nonetheless, let us combine the Export by Category and Exports data to study the volatility change in the currency market.

According to the reports, the US’s exports dropped by USD 6.6 billion from the previous month, reading USD 144.5 billion in May 2020. Looking at the Exports by Category data, all the top five categories saw a decline in Exports.

Below is the price chart of EURUSD on the 4H timeframe. Before the release of the Exports by Category (Exports), we see that the market is consolidating, and there is no clear trend as such. However, the market is slightly leaving lower highs and lower lows, indicating EUR weakness and USD strength.

On the day of the news release, it is seen that the price showed bullishness in the beginning. However, it got rejected by the sellers by the end of the day.

In the following days, we can see that the market broke out from the consolidation and began to trend north, implying USD weakness and EUR strength. There certainly would be several factors to it, but one of the accountable factors can be the disappointing numbers projected by the Exports. 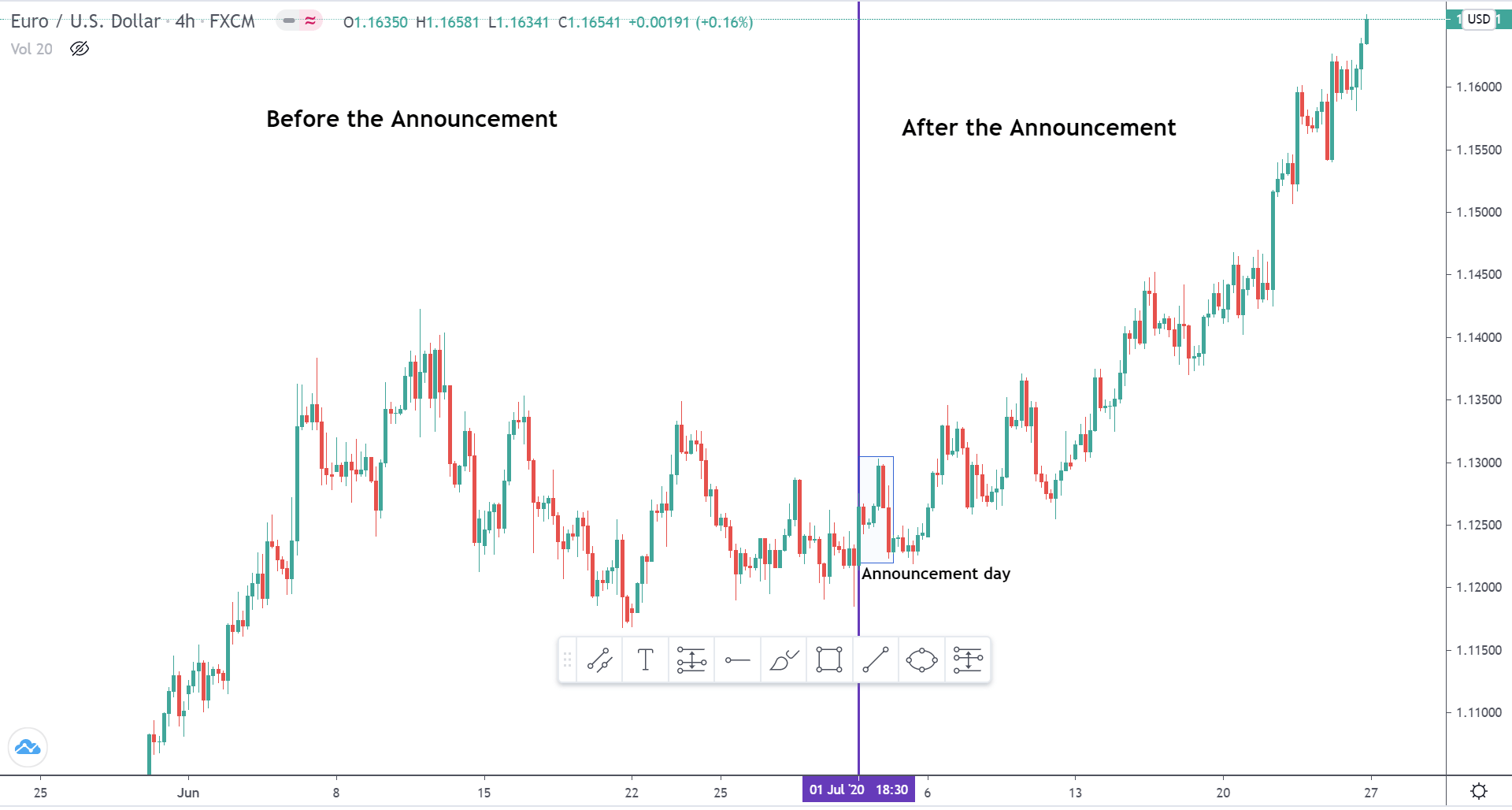 Prior to the release, we can see clearly that the USDJPY market was crashing down. However, it saw bullishness in the last week of June.

The USDJPY price saw feeble volatility on the day the news was released. In hindsight, the market dropped and continued the predominant downtrend. This indicates that the USDJPY has negatively affected post the Exports by Category numbers. 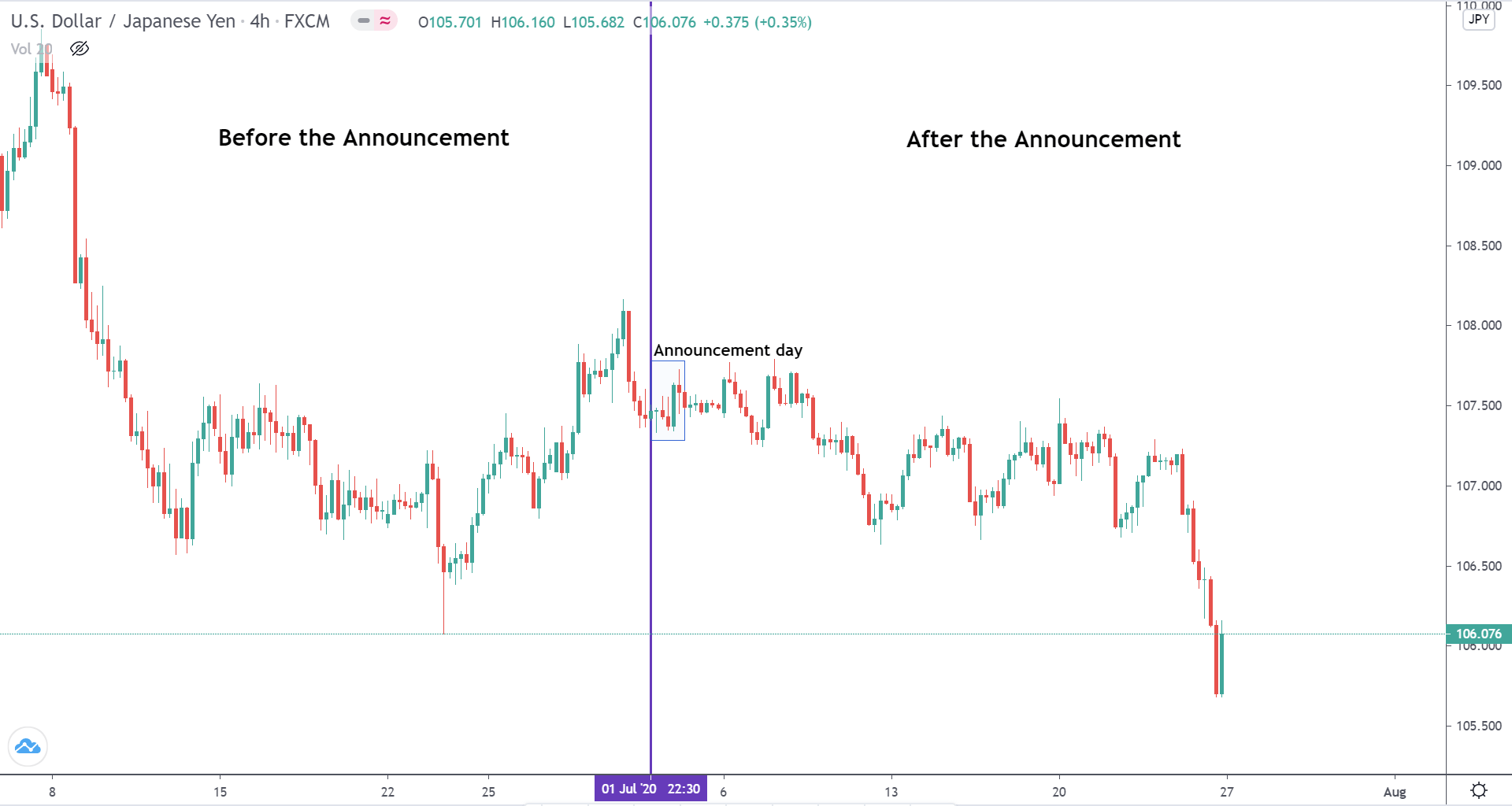 Before the report on Exports by Category, the GBPUSD market was in an evident downtrend, as represented by the trendline.

A day before the numbers were reported, the price aggressively broke above the trendline, indicating a reversal.

When the news released, the price tried going higher but was pushed right back down by the sellers. However, subsequently, the market did change direction and began to trend north. 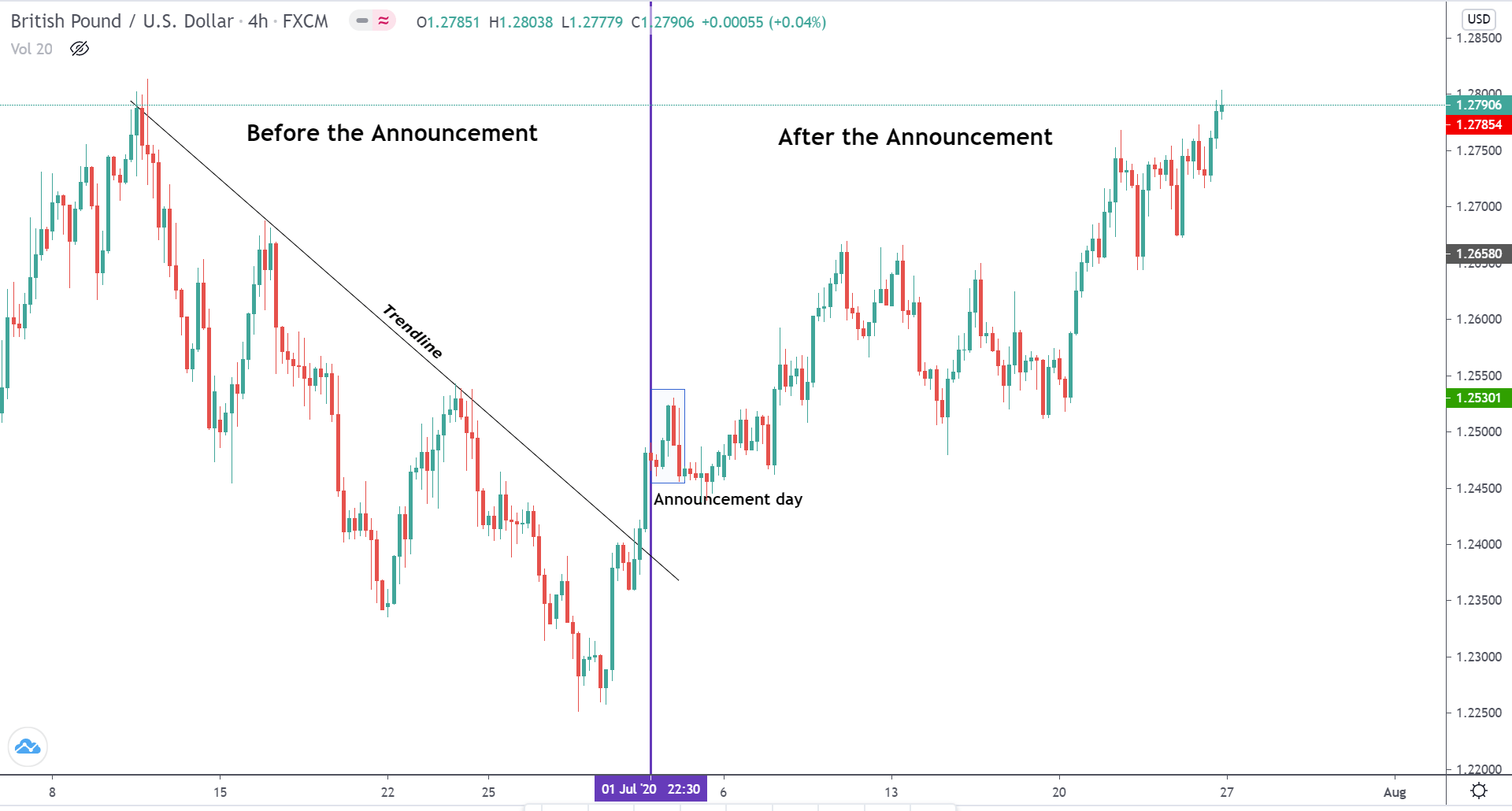 Thus, it can be concluded that the market did not have an immediate effect on the prices but did have an expected outcome in the short-term. Cheers!