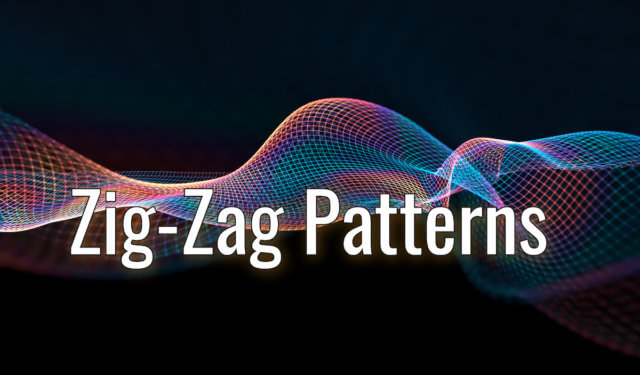 The zigzag pattern is a three-wave structure that has a limited number of variations. In this educational post, we’ll present how to analyze the zigzag pattern under an intermediate level perspective,

R.N. Elliott, in his work The Wave Principle, described the zigzag as a corrective formation that follows an internal sequence defined by 5-3-5.

The wave analysis analyst should consider that corrective patterns are not easy to recognize while the structure is not complete; however, it results revealing and useful to make forecasts once the formation is complete.

The following figure illustrates the steps of the zigzag pattern construction previously described.

According to the extension of wave C, the zigzag pattern would be classified as normal, extended, or truncated.

Truncated zigzag: This formation is less frequent than the other two zigzag pattern variations. Further, wave C shouldn’t be lower than 38.2% of wave A, but not greater than 61.8% of wave A.

Once wave C ends, the next path should retrace at least 81% of the entire zigzag formation. According to Neely, this pattern it is likely that appears in a triangle structure.

Extended zigzag: This variation is characterized by having a more prolonged wave C than the other two models, which surpasses the 161.8% of wave A, being similar to an impulsive sequence.

Once completed the wave C, the next path tends to retrace at least 61.8% of wave C.

To canalize a zigzag formation, the wave analyst should pay attention to wave A and the end of wave B.

Finally, once the price violates the base-line O-B, we can conclude that the zigzag pattern ended.

NASDAQ e-mini and its Zigzag Pattern

The following figure represents to NASDAQ in its 12-hour timeframe. The chart reveals the upward process that the technologic index developed in the Christmas rally of 2018 at 5,820.50 pts.

The impulsive bullish sequence completed its internal five-wave moves at 7,879.50 pts on April 24th, 2019, from where the price began to develop a corrective zigzag pattern.

As illustrated in the last figure, the wave (a) in blue looks as a five-wave structure that ended at 7,290 pts on May 13th, 2019. The second leg of the zigzag pattern advanced close to 61.8% of the wave (a), which accomplishes the requirement of zigzag construction.

The next bearish path, corresponding to wave (c) produced a second decline in five waves and dropped beyond the 61.8% and below 161.8% of (a) which lead us to conclude that the type of zigzag pattern is normal.

In this educational article, we reviewed the characteristics of the zigzag pattern and how the wave analysts can differentiate from another kind of corrective formation.

At the same time, the Fibonacci tools represent a useful way to validate what structure develops the market. In this context, this knowledge will allow the wave analyst to identify potential zones of reaction, which would enable us to incorporate into the trend.

In the next article, we will review the triangle pattern and how to recognize its variations.