In this video, we are going to show you how to set up a hedging strategy to trade double tops and bottoms. The idea is to set up two trades simultaneously where one trade will act as an immediate execution trade, and where all the technicals are telling us that price action will go in a certain direction. And the second trade will act as an insurance policy should price action ignore our technical analysis setup, and in which case, we will then capture price action as it moves in the opposite direction.
In the following examples, we are looking for price action reversals, which will form the basis of our technical analysis; and therefore our belief is that we will be looking for price action to have peaked, or bottomed out, and then reverse. Our secondary trade, which will act as an insurance policy, will be set up on the basis that price action has simply pulled back and then continues in the direction of the original trend.
Before we move ahead with our setups, let’s quickly remind her selves of the kind of setup we are looking for a double top scenario. 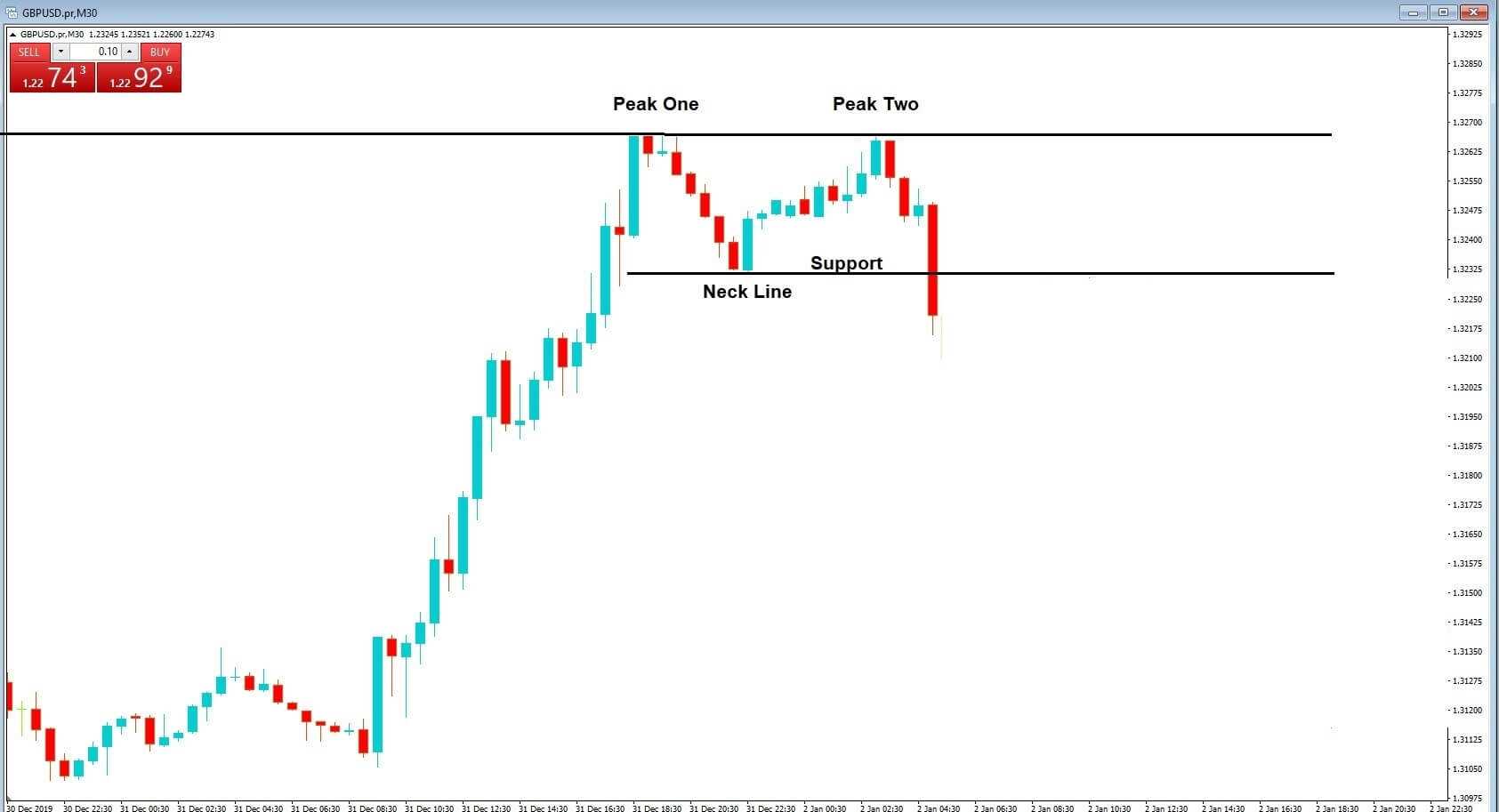 Example A, shows us that for a double top formation we need a peak, followed by a pullback to what is referred to as a neckline which acts as a line of support, followed by a second peak which must be at the same exchange rate as the previous peak, and then confirmation of the double top pattern occurs once price action breaches the neckline for a second time. 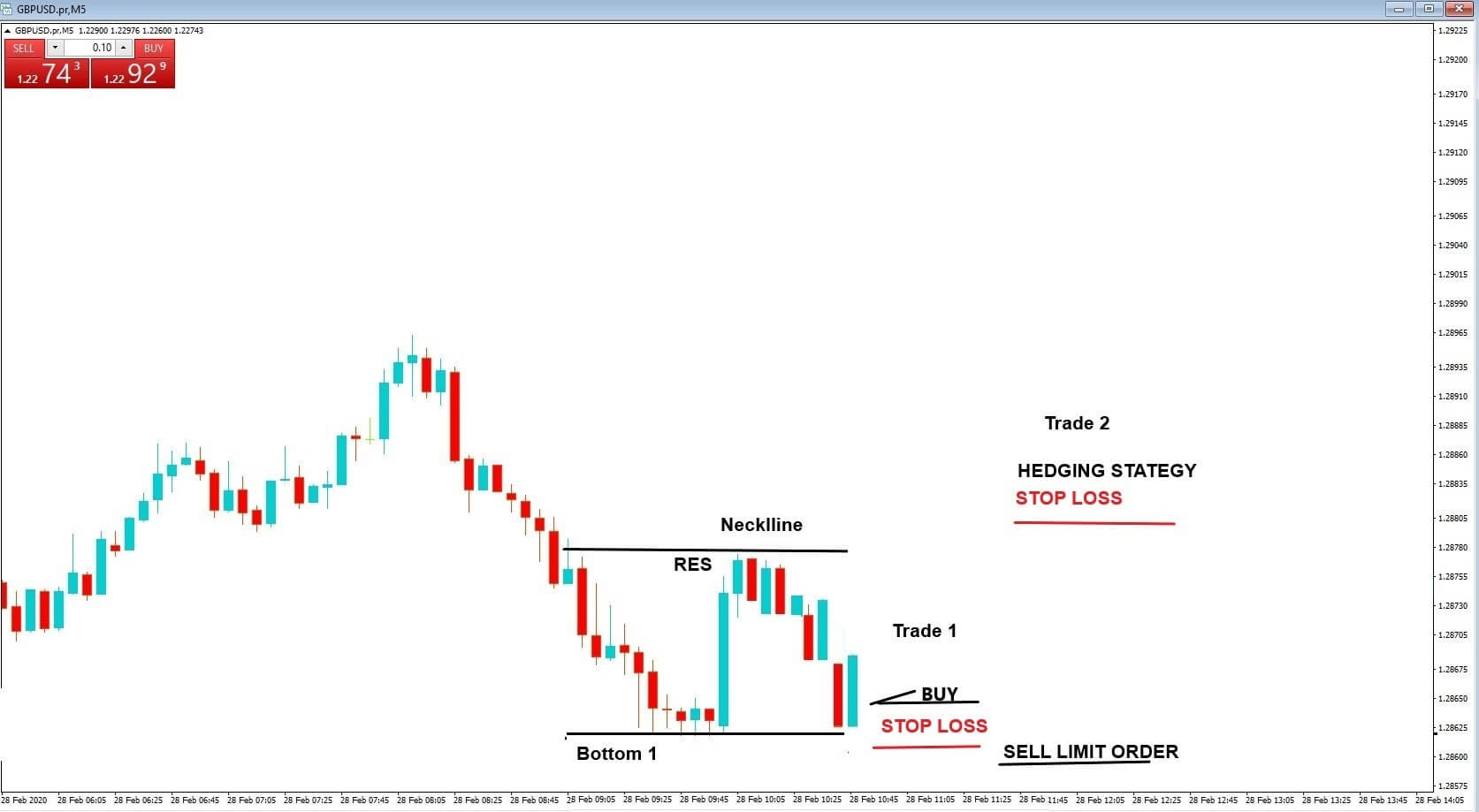 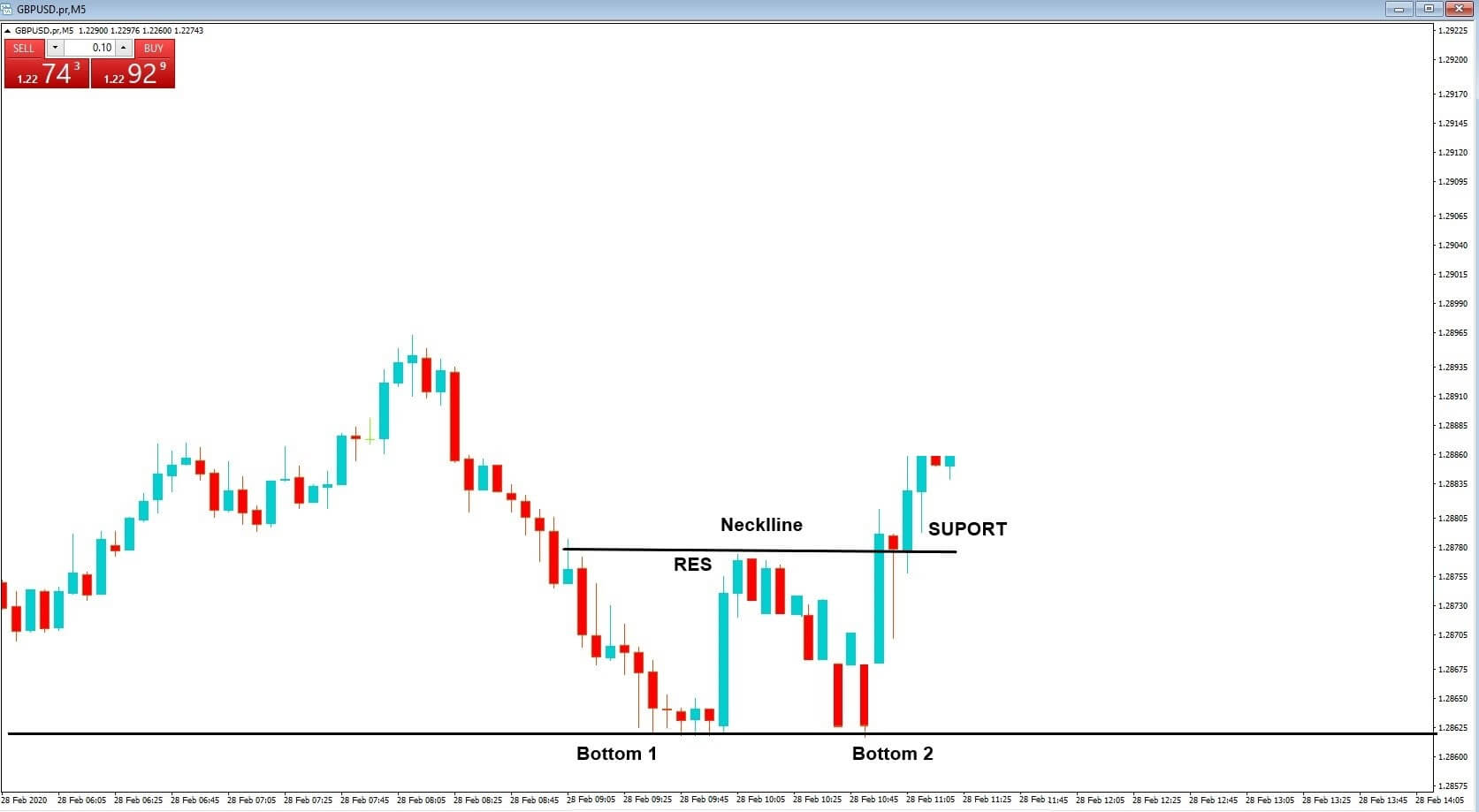 Example C, the following is how we set up the double top hedge. First of foremost, we need to wait for price action to pull away slightly from our second peak and go short at this point with a stop loss a couple of pips above whichever peak was the highest of the move. Should price action continue lower than our neckline, the double top formation will be confirmed, and we can ride the downward move. If price action reverses from the support line, this will confirm an area of consolidation in which case we can bring into play a protective stop out in front of our entry, and at least we will not have lost any money on this trade. 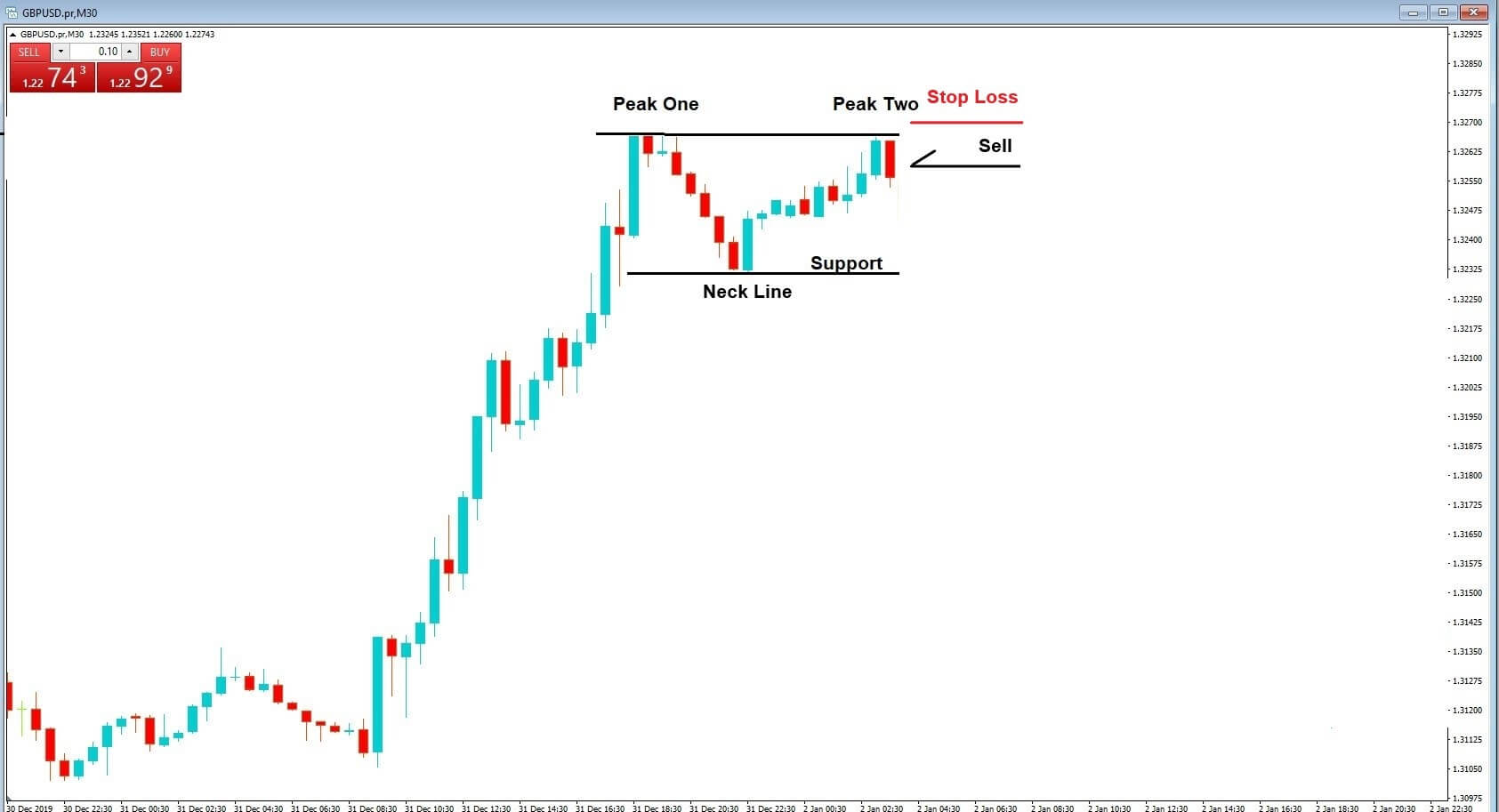 Example D, The hedging strategy set up is where we place a buy limit order a couple of pics above the stop loss from the first trade, with a slightly larger stop loss which must be a couple of pics below show the previous support or neckline, and in this case, we expect that price action will continue with the original upwards trend. For this trade, we must have a minimum target equal to the amount of pips that were lost in trade one in order to keep our profit and loss in check. However, naturally, we want to let the trade run on as much as possible. 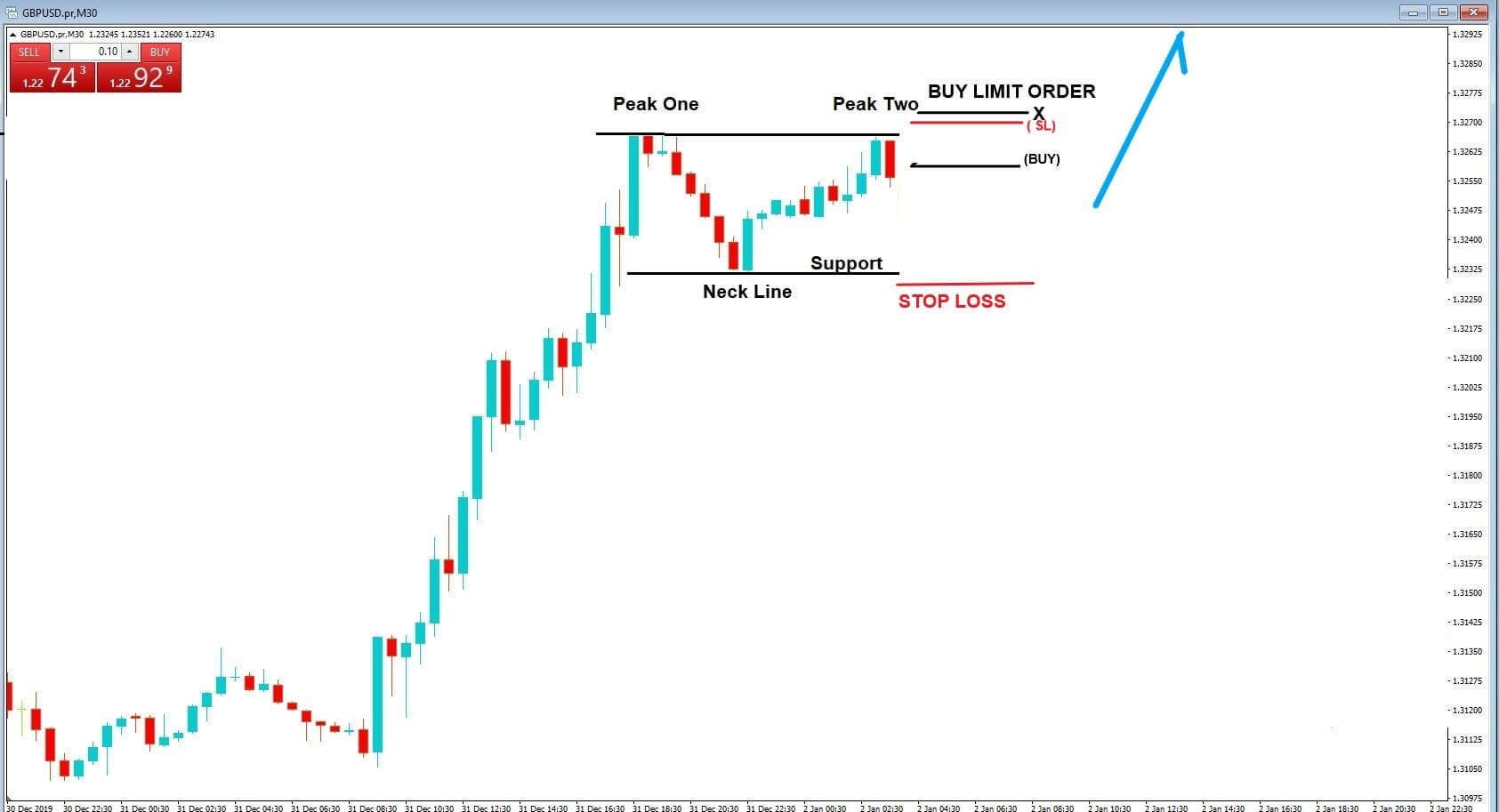 Example E, In the double bottom hedging strategy, we will simply need to reverse the trade setup for the double top. In which case, we would go long as soon as price action reverses from our second bottom line. With a tight stop loss a few pips below the lowest point of both bottoms. If price action then goes on to reverse back from the neckline to form a third bottom, we can close the trade out with a small profit. But the double bottom confirmation pattern will be confirmed once the neckline is preached, and price action continues in an upward trend.