Finding ways to predict the future price movement of an asset has always been incredibly hard, no matter what asset you are trading. Cryptocurrency trading differs slightly from trading other assets, as it is more volatile, much younger, and susceptible to fear of missing out as well as fear, uncertainty, and doubt.
Although the number of factors that influence the price of a cryptocurrency is almost immeasurable (reaching milestones, partnerships, security breaches, new regulations, etc.), combining this knowledge with the usage of other methods, such as trend detection can be quite profitable. 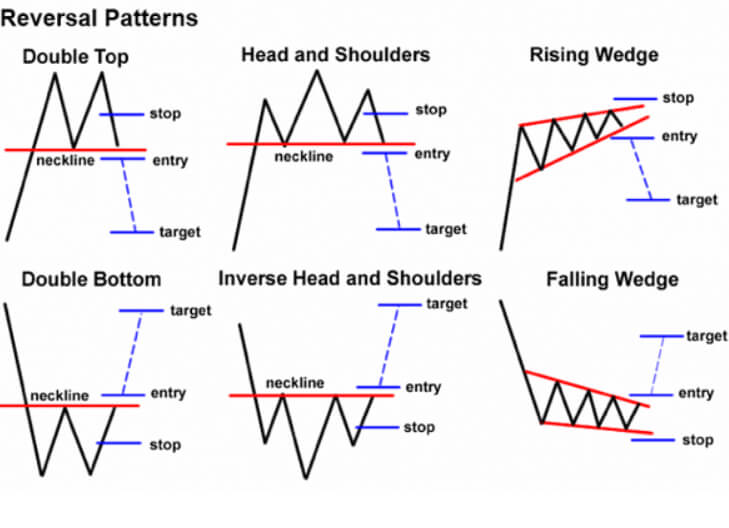 No matter how volatile the prices of cryptocurrencies may be, at times, experienced traders can spot distinct movement patterns that allow them to predict the direction of the price movement. This guide will explain the fundamentals of three patterns that traders look for when trading crypto on various exchanges.

In technical analysis, a head and shoulders pattern is a sign of bullish-to-bearish trend reversal. It is regarded as one of the most reliable, if not the most reliable trend reversal patterns.
As the cryptocurrency market is extremely volatile and bulls and bears constantly switch in terms of market dominance, the head and shoulders pattern would appear after the market has been dominated by bulls.

The target price in this reversal is equal to the distance from the neckline to the peak of the head but in the opposite direction.
When deciding whether to trade the head and shoulders pattern, traders should not just assume that the pattern is going to play out. Instead, they should be patient and wait for the decline after the right peak to reach the neckline. Only then can they think of taking a position.
Reversed head and shoulders
Traders should also look for the reversed head and shoulders pattern, which plays out the same way a regular one does, but in the opposite direction. This pattern marks the end of the bear season.

Check out part 2 of our pattern trading guide, where we will cover various triangle formations as well as wedges.