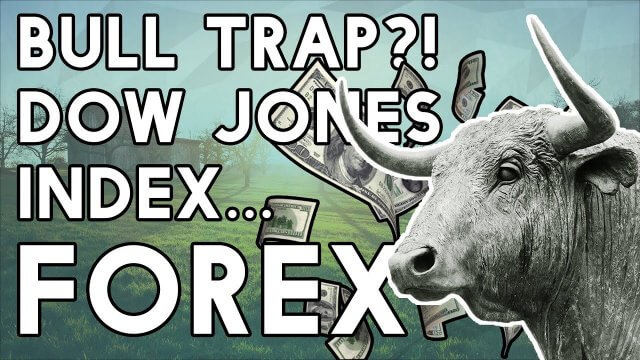 A bull trap is a misleading signal which tells financial traders that an asset, which has recently fallen, has reversed and is currently heading upwards, when in fact, the asset will continue to decline. Thus trapping buyers who went long, often at the top of the rebound, only to go on to suffer losses when the asset crashes.
We may well find ourselves in such a situation with the Dow Jones Index currently. 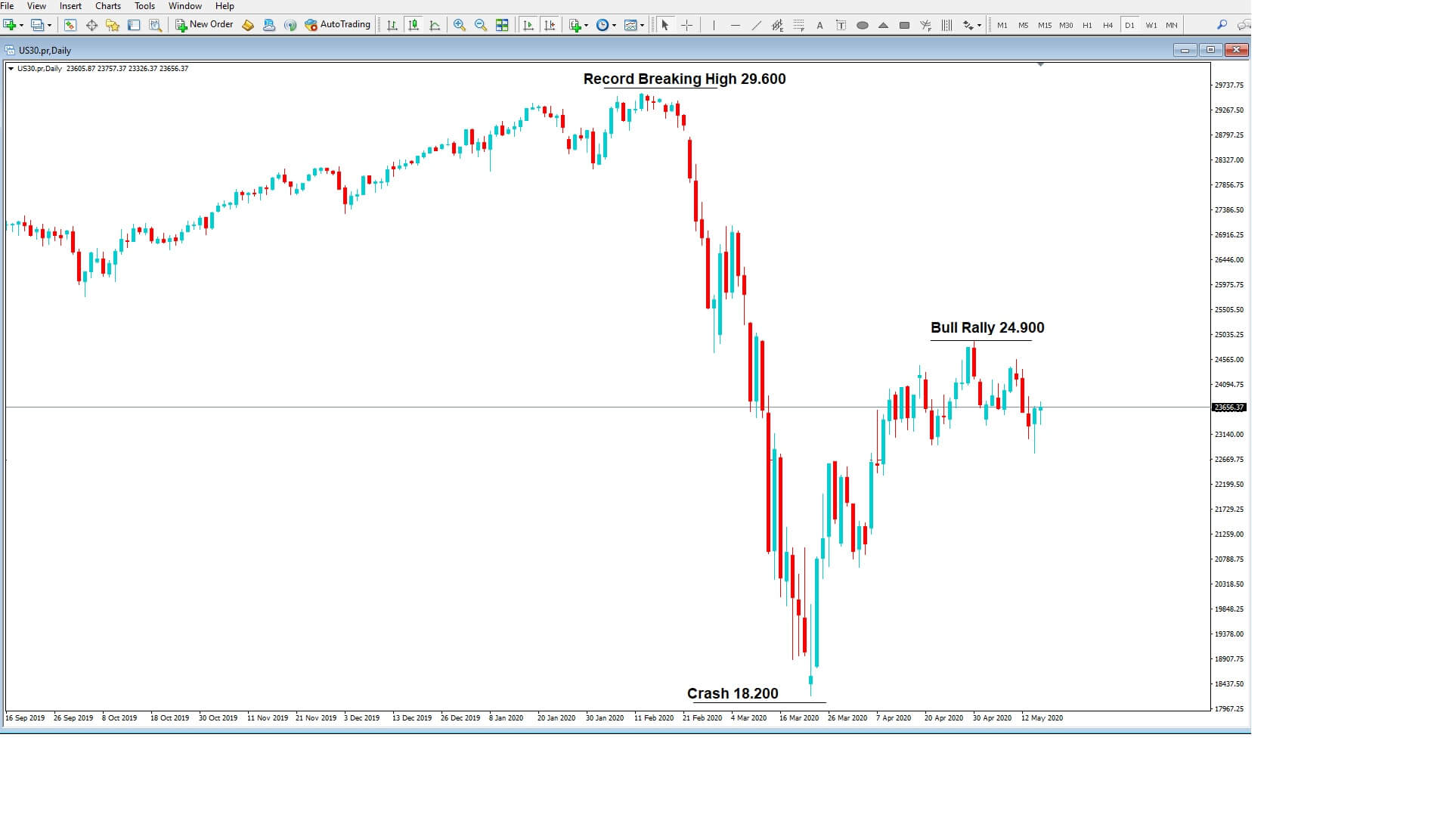 This is a daily chart of the Dow Jones index, and we can see that after a record-breaking run during February 2020, when the American economy was flying high, it crashed to a low of 18.200 just a few weeks later after the outbreak of Covid-19 as the US shut down its economy to protect citizens. This is the first time their economy has been closed down by Government consent.

The Federal Reserve threw money at the economy in the form of reducing interest rates and massive rounds of financial relief packages worth over $3 trillion, so far, and yet still with the majority of the economy flatlining, the Dow Jones Index rallied to a recent high of 24.900. This was effectively a massive bull run during a slump. It caught a lot of investors off guard, many who were selling stocks and shares seem to have sold out too soon during the first crash down to 18.200. But will those investors who started buying again after that low now suffer as the index falls lower, or will we continue to see momentum to the upside?

The issue for investors, as the Dow sits at 23.650 level, is that Banks are not paying dividends to investors this year as they try to shore up losses caused by the pandemic. This makes bank stock highly unattractive to traditional investors who would previously buy such stocks while accepting the risk of a potential fall in stock value while receiving dividend payments. They were happy to ride out any financial storms while waiting for better times ahead after the economy recovers and thus a return in the share price.
However, this crisis is not the same as the financial crisis in 2008, where investors such as Warren Buffet piled in through his investment vehicle, Berkshire Hathaway, to pick the stock up cheaply looking for long term growth. Boy, did he do well when the economy went on to surge higher?

However, Berkshire Hathaway has suffered heavy losses in this current crash, having lost an estimated $50 billion, and Mr. Buffet claims to have made a mistake in buying airline stocks and has just sold 84% of his stake in Goldman Sachs, the darling of the Wall Street investment banks. Could the writing be on the wall for US stocks now? He said that while the trains had come off the tracks in 2008, they are currently in the sidings in this event.

So, with over 20 million currently unemployed, GDP at -4.8% for March, manufacturing down, Government debt growing, and with 1.5 million cases of Covid-19 and almost 90 thousand poor souls having lost their lives, what on earth seems so attractive about buying US stocks right now?
The simple truth is that there are more buyers than sellers right now, many investors believing that the economy will bounce back quickly after similar health crises, such as Ebola, Sars Bird Flu, and Zika, where there were crashes in stocks but where they quickly recovered. And also where firms and

executives of those firms have bought their own stock on the dip lower. Some economists believe there will be a V-shaped recovery: a quick fall and a quick recovery. This sort of talk causes F.O.M.O or fear of missing out, a very big reason why we see such rallies, as they pile in buying up stock believing that the worst is over. 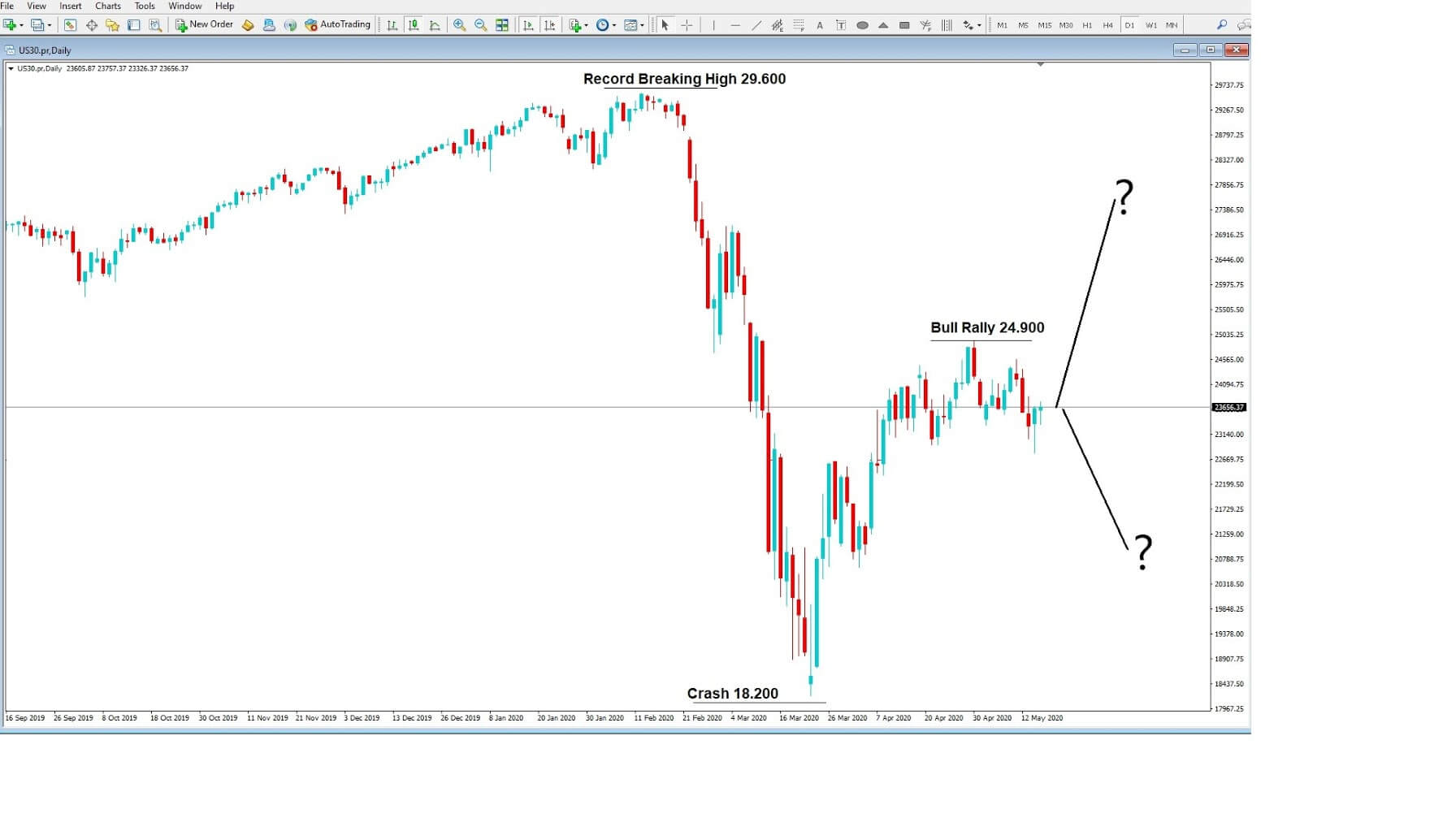 This is the number one reason that stocks are getting bought while the news is getting worse. But the elephant in the room is Covid-19 is still an unknown disease and the moment markets hear of second waves they will drop stocks like hot potatoes. There will highly come a time, very shortly, which will be the straw that broke the camel’s back, bringing the current bull run to a crashing end. And that will confirm what we see as a bull trap.