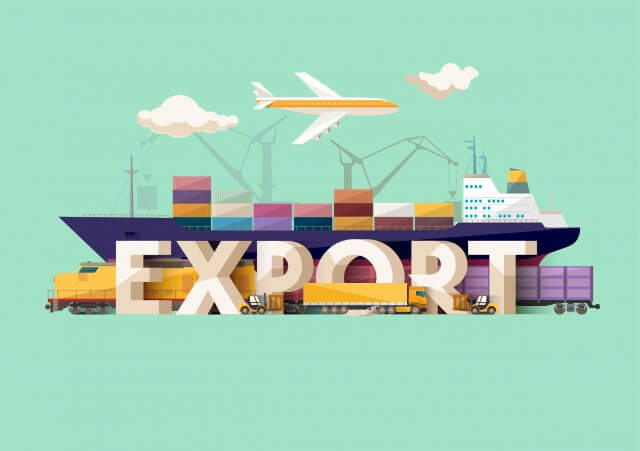 Exports make one half of a country’s International Trade Balance. In today’s modern economy, with many countries pursuing their economic growth through the main focus on their exports, we must understand Export and its implications on the domestic as well as the global economy. The big words that are thrown around in the media like “Currency Wars,” “Trade Wars,” etc. all revolve around the exports among countries. A thorough understanding of the International Trade and Balance of Payments of countries can help us gauge economic growth on a macroeconomic level very well.

The sale of locally produced goods to foreign countries is called Exports. Goods and Services produced in one country only when sold to other countries it is called an Export. Countries generally export goods and services that they have a competitive advantage over other countries. For example, Germans export Cars, America export Capital Goods, China export electronic goods, Jamaica exports Coffee, etc.

The advent of Globalization led to an increase in international trade opening doors for domestic industries to tap into the global market. The journey has not been smooth, during the Great Depression, and the following World War II slowed down international trade where many countries closed off their doors to foreign goods as part of protectionist strategies.

In general, a trade surplus, i.e., a country’s exports, exceeds its imports, is good for the economy. Although, it may not always be necessary as countries may import more than their current exports to build future and long term projects that will assist them in their economic prospects in the long run. In today’s world, China, the United States, Germany, Japan, and the Netherlands are the biggest exporters in the world in terms of revenue.

How can the Exports numbers be used for analysis?

Exports are crucial for today’s modern economies because of the many-fold that it brings with it to the exporting country. The following are the benefits and impacts of exports on the economy:

Broader Market – Companies always want to sell more and increase their profits. By exposing them to a broader range of audience gives them a much better chance of making profits than with a limited audience. By tapping into foreign markets, the domestic companies have to evolve to meet the local demands of other nations and learn how to mix what they sell and what is required by the world well. All this makes the companies grow more robust and overall increases their size and revenue a lot faster than what they would have achieved through operating domestically.

Wealth – Exports increase demand and, consequently, profits. It ultimately leads to employment, increases in wages, and ultimately raises the standard of living. Governments actively promote and encourage exports by reducing tariffs and use protectionist strategies like import barriers to protect their domestic business.

Foreign Reserves – As the trade happens between two countries with different currency regimes, where the payment can be in the domestic or foreign currency, this increases the Central Bank’s currency reserves. With sufficient currency reserves, the Government can manipulate exchange rates to control inflation and deflation by increasing or decreasing currency volume in the global market whenever needed.  During times of substantial exports, countries intentionally peg their currency value lower to make their products appear cheaper and increase the returns on their exports. China has been accused of this low pegging their currency in their favor. Subsequently, other countries have retaliated by lowering their currencies as well. It is what is being called “Currency Wars.”

Trade Surplus – It is always better to be owed money than to owe money as an individual. The same, in general, applies to countries that want to be net creditors to the world than net debitors. Increasing trade deficits can pile up the country’s debt, which can multiply over the years and can be very difficult to overcome. A healthy level of exports, in general, brings more money into the country and keeps the economy going at a steady and healthy growth rate.

Although the market forces are self-adjusting, frequent Government interventions to speed up the correction process to keep the output of the business constant is common.

Exports form part of a country’s Trade Balance, which is reported under the Current Account Section of the International Balance of Payments Report of the country. The Balance of Payments reports is released quarterly and annually for most countries. The Trade Balance reports are published every month, which consists of Exports and Imports figures.

For the United States, the Bureau of Economic Analysis publishes the monthly Trade Balance reports on their website in the 1st week of every month for the previous month.

Impact of the ‘Exports’ news release on the price charts

In the previous section of the article, we understood the importance of Exports in an economy and saw how it contributes to the growth of the country. Exports are nothing but goods and services that are sent to the rest of the world, including merchandise, transportation, tourism, communication, and financial services. A nation that has positive net exports experiences a trade surplus, while a negative net exports mean the nation has a trade deficit. Net exports may also be called the balance of trade. Economists believe that having a consistent trade deficit harms a nation’s economy, creating pressure on the nation’s currency and forcing lowering of interest rates.

In today’s lesson, we shall analyze the impact of Exports data on different currencies pairs and observe the change in volatility due to the news release. A higher than expected number should be taken as positive for the currency, while a lower than expected number as negative. The below image shows the total Exports of Australia during the month of March and April. It is evident that there was an increase in Exports in the current month by 20%. Let us look at the reaction of the market to this data.

We shall begin with the AUD/USD currency pair to witness the impact of Exports on the Australian dollar. The above image shows the state of the chart before the news announcement, where we see that the market is in a downtrend, and recently the price has displayed a reversal pattern indicating a possible reversal to the upside. Based on the Exports data, we will look to position ourselves in the currency.

After the news announcement, the market moves higher and volatility increases to the upside. The sudden rise in the price is a result of the extremely positive Exports data where there was a rise in the value by 20% compared to the previous month. This brought cheer in the market, making traders to ‘buy’ Australian dollars and thus, strengthening the currency. One can go ‘long’ in the market after the news release with a stop loss below the recent ‘low.’

The above images are that of AUD/NZD currency pair, where we see that the market is in a downtrend that began just a few hours ago, and recently the price has shown sharp reversal from its recent ‘low.’ Technically this is an ideal reversal pattern that signals a reversal of the trend. One can take a risk-free ‘long’ position if the news announcement does not change the dynamics of the chart.

After the news announcement, the price sharply rises and closes, forming a strong bullish candle. As the Exports were exceedingly high, traders bought Australian dollars and increased the volatility to the upside. This could be a confirmation sign of the trend reversal, where we can expect the market to move much higher.

The above images represent the EUR/AUD currency pair, where the first image shows the state of the chart before the news announcement. From the chart, it is clear that the overall trend of the market is up, but recently the price has shown a strong reversal pattern to the downside. Looking at the price action, we will prefer taking a ‘sell’ trade depending on the impact of the news release.

After the news announcement, the price falls lower, with an increase in volatility to the downside. The bearish ‘news candle’ is a consequence of the upbeat Exports data, which came out to be exceptionally well for the economy. Since the Australian dollar is on the right-hand side of the pair, traders sold the currency pair in order to strengthen the Australian dollar. This is a perfect ‘sell’ for all.

That’s about ‘Exports’ and its impact on the Forex market after its news release. If you have any questions, please let us know in the comments below. Good luck!