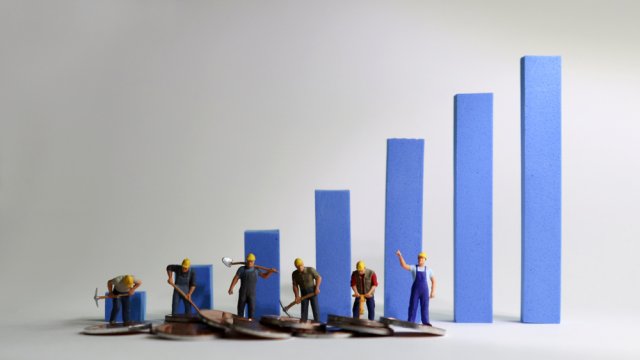 Minimum Wages are essential for protecting citizens and ensuring that everyone gets a fair share of the fruits of the progress made. Minimum Wages act as the foundation for everyone at the entry-level to compete equally to the top. Minimum Wages are used by a majority of the countries across the world. Understanding Minimum Wages and its importance can help us better understand improvement in people’s living standards over time alongside the country’s economic growth.

What are Minimum Wages?

The International Labor Organization (ILO) defines Minimum Wages as “the minimum amount of remuneration that an employer is required to pay wage earners for the work performed during a given period, which cannot be reduced by collective agreement or an individual contract.” It is the least money paid out for work as a wage over a given period. It cannot be lowered by mutual understanding nor through a legal agreement. Hence, it is the lowest remuneration that an employer can give their employees.

The Minimum Wage can be set by a statute, wage board or council, competent authority decision, industrial or labor courts, tribunals, or law enforced collective arguments. Most countries had introduced the Minimum Wages by the end of the twentieth century.

Minimum Wages initially started off to stop exploiting workers in sweatshops (places with unacceptable working conditions, potentially illegal and dangerous). Owners at such places generally had dominion over that workplace and people working. But later on, it became a means to help uplift the lower-income families. Minimum Wages were first incorporated by New Zealand in 1894, followed by many other countries gradually.

How can the Minimum Wage numbers be used for analysis?

Minimum Wages acted as the price floor beneath which a worker may not sell their labor. The purpose of Minimum Wages is to set a barrier to exploiting the labor force through unduly low wages for their work. It will ensure a just and equitable way of distributing the returns on the progress made collectively. It will also ensure people receive the money required to sustain a living and act as legal protection for people who need it.

Minimum Wages are also used as part of a policy to eradicate poverty. It also helps curb inequality amongst employees based on age, sex, or race for the work of equal value done. Minimum Wages also acts as a floor for wage negotiations and collective agreements. Any negotiation always has a legal and reasonable base, only above which all negotiations can take place and shall not fall below it.

The effect of increasing the Minimum Wage had a negligible impact on the employment rate in general. Still, cost-cutting in other sectors and the profitability of the company become vulnerable. Minimum Wage level adjustments are deemed to be made from time to time, meaning whenever the board feels it is needed based on the cost-of-living indices. Most countries adjust their Minimum Wages yearly, some do on a six-month basis, and some do it on a two-year basis.

Inflation and Cost-of-Living fluctuations erode the purchasing and protection power of the Minimum Wage. At such times, unscheduled interventions become essential to keep protecting the labor force.

Fixing Minimum Wage too low defeats the very purpose for which they were set and too high creates a significant impact on employment, worsening the situation. Careful and objective decisions have to be made to set and adjust Minimum Wages periodically as per economic conditions.

Setting too low could constrain consumer spending, which is terrible for the economy as it fuels the GDP. Setting too high could trigger inflation on subsequent levels, hurting exports, decreasing profit margins, and reducing employment.

The ILO deems the following three economic factors to take into account to set Minimum Wages: economic development requirements, productivity levels, and desirability of achieving and maintaining high levels of employment. All the factors are correlated and have to be set to optimize all three economic factors.

The ratio of Minimum to Average Wage is also used to understand wage inequality among laborers within an organization. In developed economies, Minimum Wages generally range 35 to 60 percent of the Median Wage. In developing economies, the percentage is even higher, indicating higher-level workers are relatively underpaid. Minimum Wage at aggregated levels classified based on regions can also help central authorities to identify lagging states or regions, where the standard of living can be improved and economic backwardness eradicated. 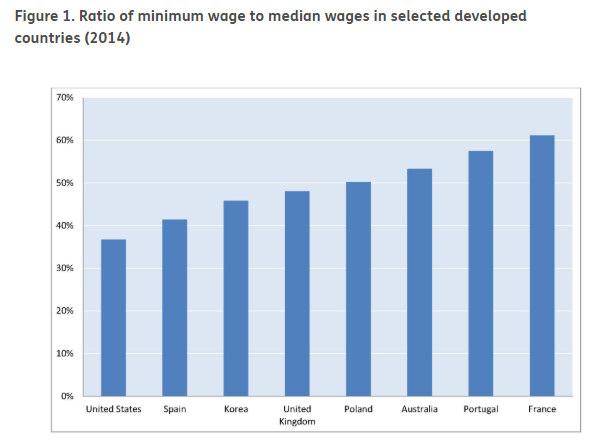 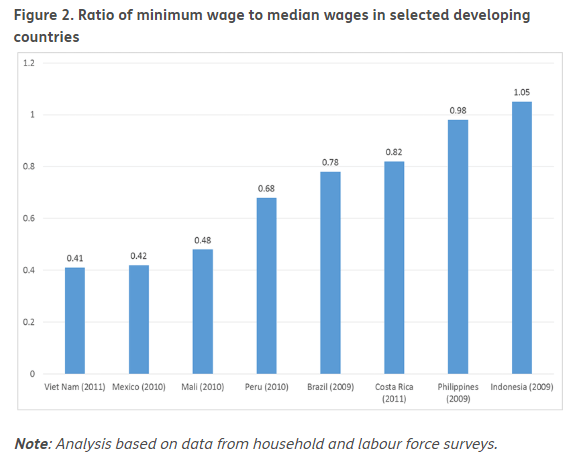 Minimum Wages changes are often annual and do not have an impact on currency markets as it pertains to a particular section of working-class people. Minimum Wage is a low impact lagging indicator and does not deem any importance in the currency markets.

It is useful for central authorities and vulnerable workgroups to raise their living standards and maintain economic equality. When everyone is treated justly in terms of wages, economic growth is not crippled by exploitation and discrimination.

In the United States, the Department of Labor enforces the Fair Labor Standards Act (FLSA) and sets the Minimum Wage and overtime pay standards. It is enforced by the Department’s Wage and Hour Division. Annual revisions to the same are made and announced, if any.

The Minimum Wage is an employees’ base rate of pay for ordinary hours worked. It is dependent on the industrial policies that apply to their employment. Employees cannot be paid less than their Minimum Wage, even if they agree to receive it.

The below image shows that the weekly wages were increased for Australian employees in 2020. Although the difference is not huge, it still is a positive step taken for the daily wage workers. Looking at the data, we should not expect significant volatility in the currency pairs during the announcement. 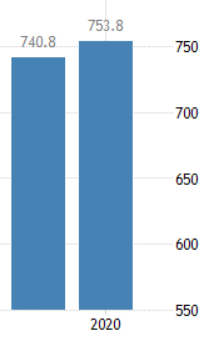 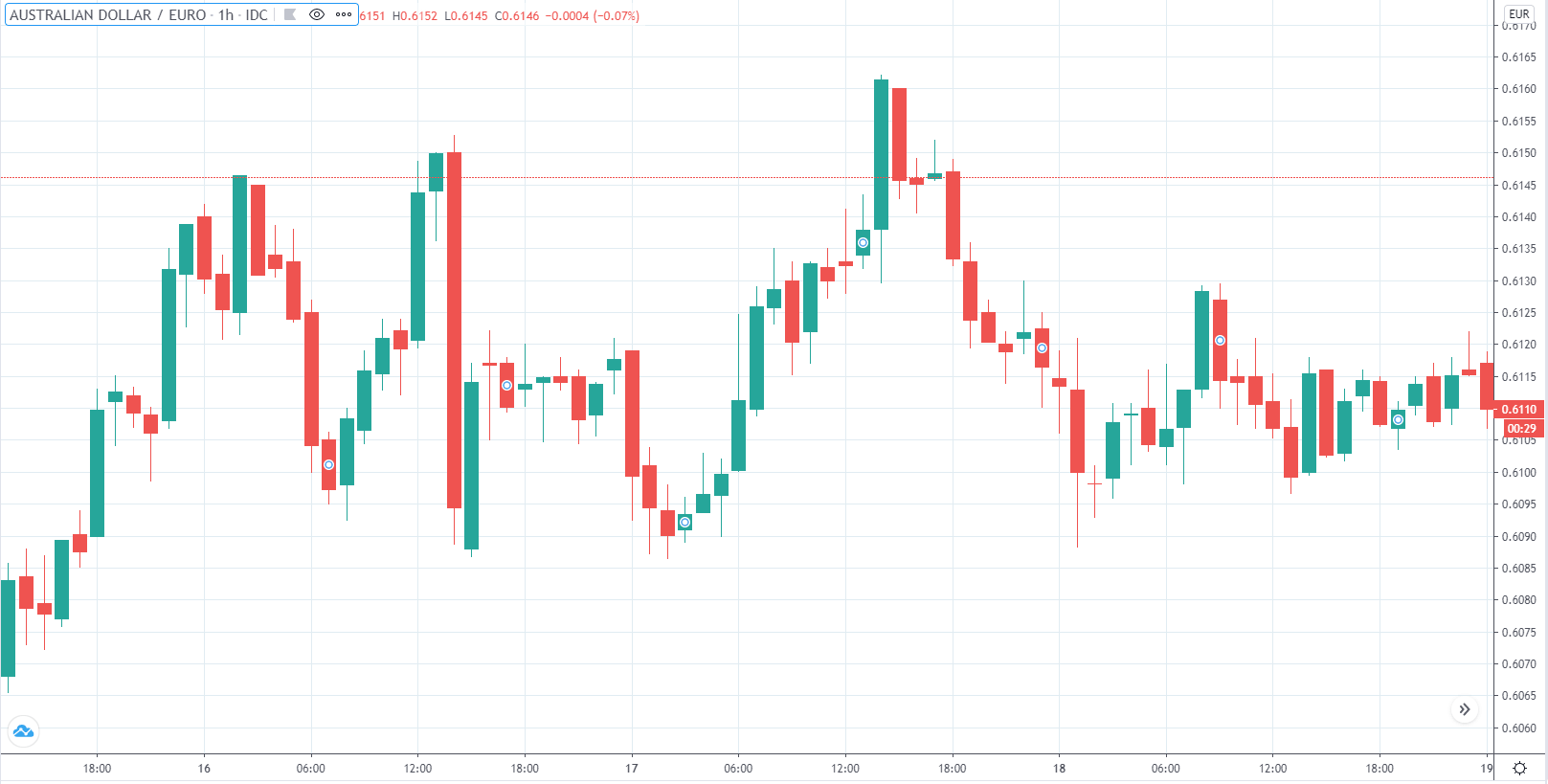 In the above image of the AUD/EUR 1-hour timeframe chart, we try to establish potential trading opportunities. The pair has been ranging for the past three days before June 19th, 2020. 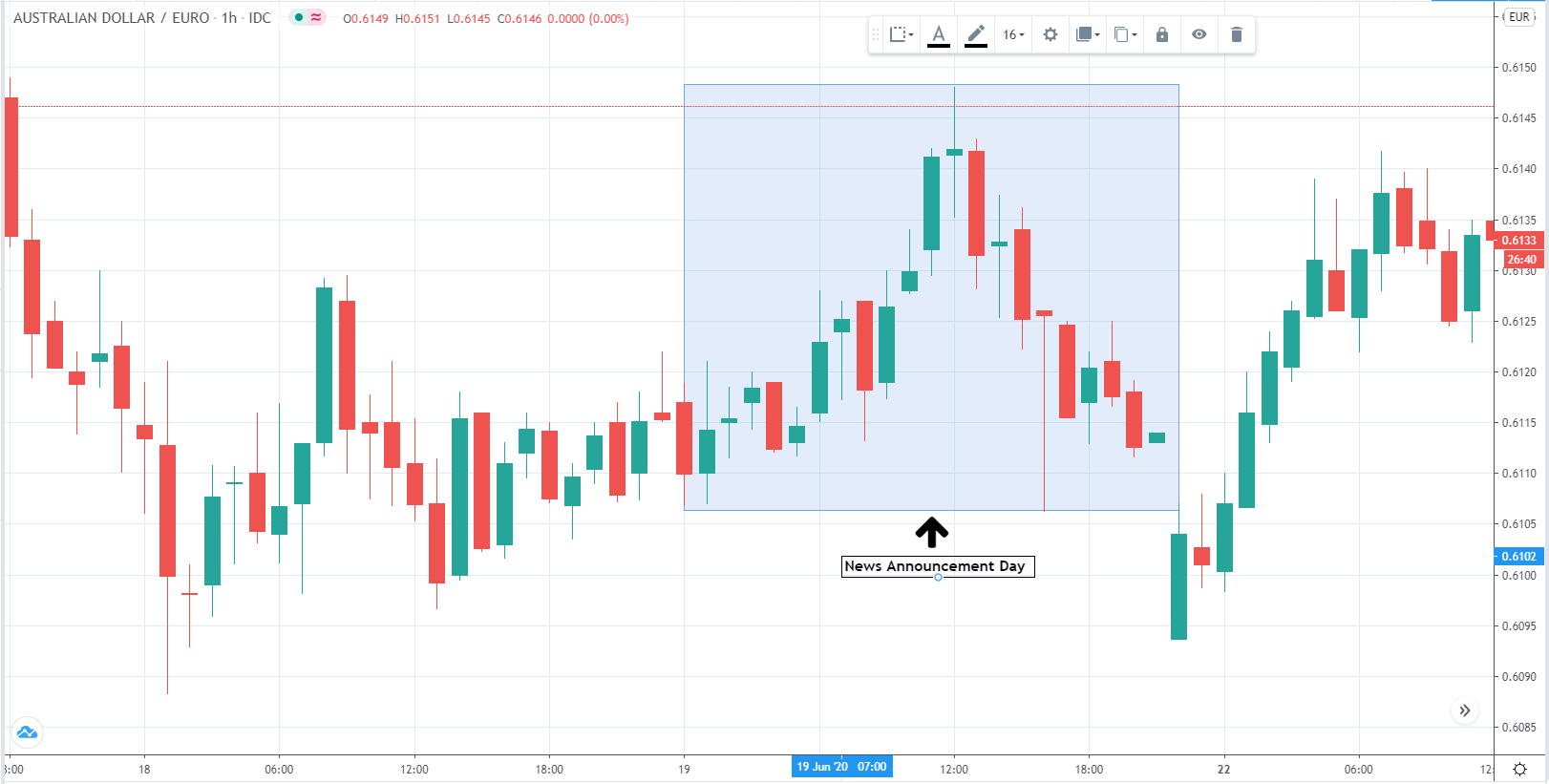 The above image highlights the news announcement day. It may seem there was a small uptrend that was built was erased in the second half of the day. An increase in the minimum wages in favor of AUD did not break the trend established a few days earlier. The pair continues its range post the announcement day also. 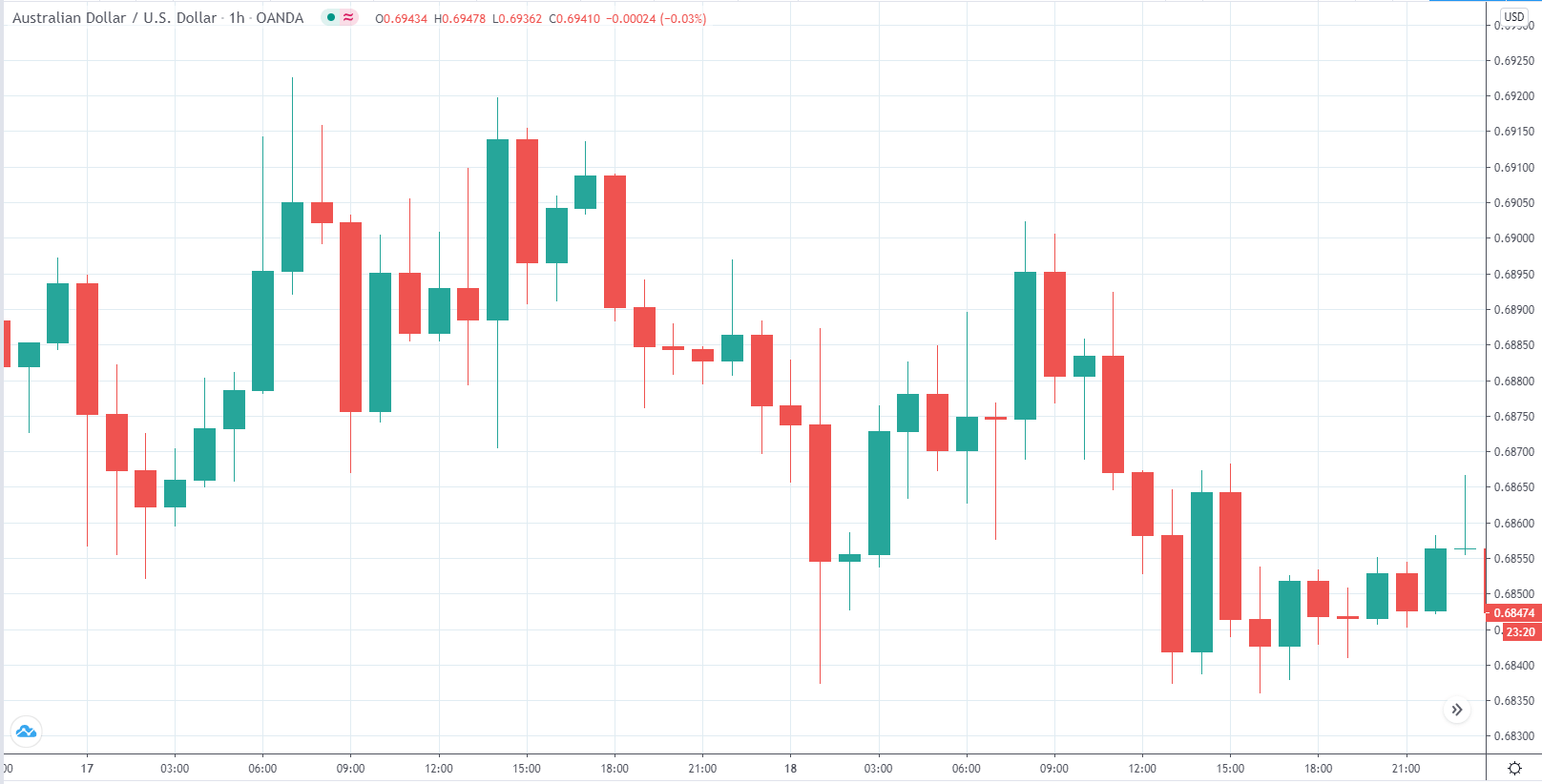 The above image highlights the AUD/USD pair a few days before the news announcement day. No trend has been established as of now. 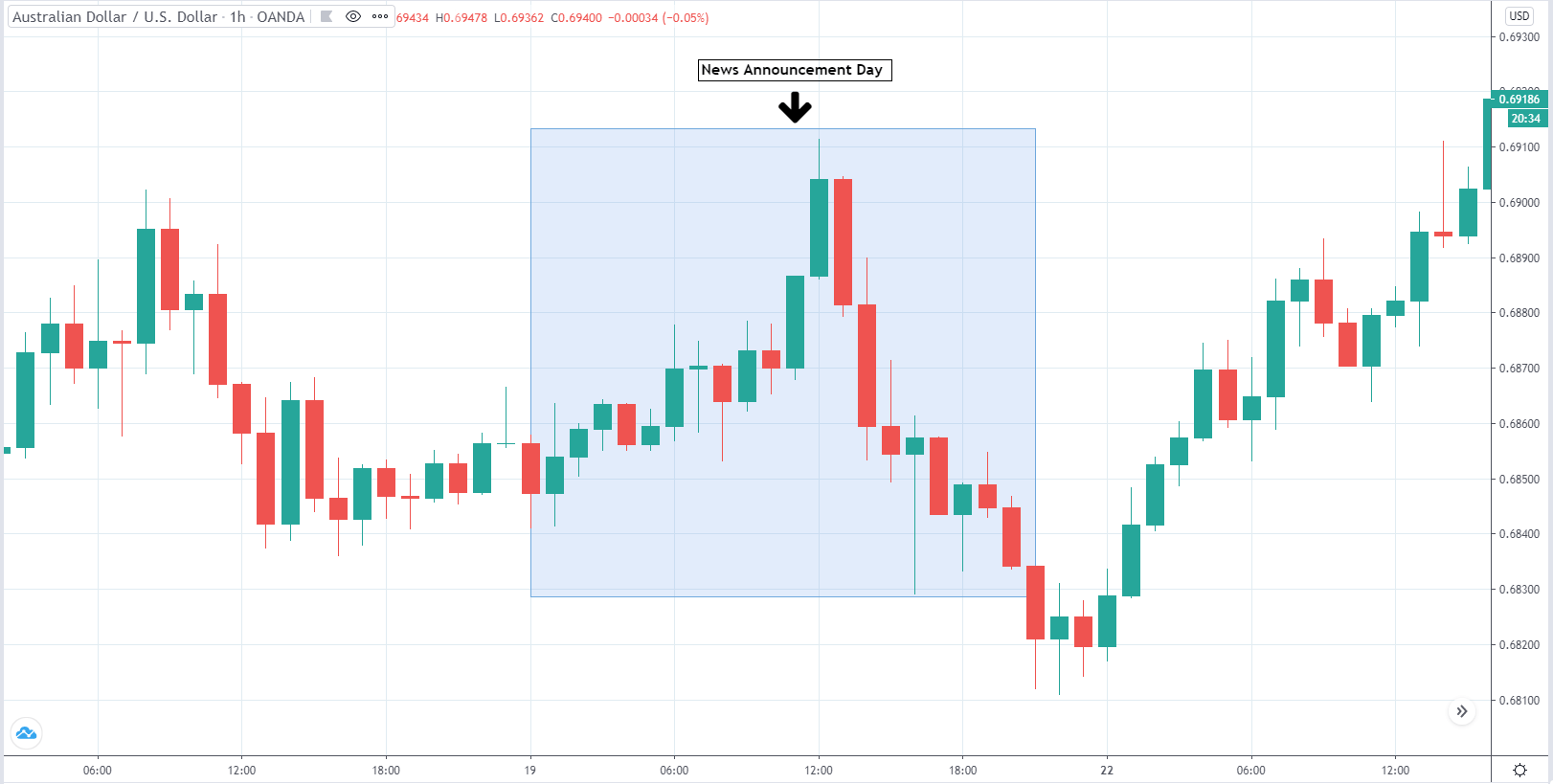 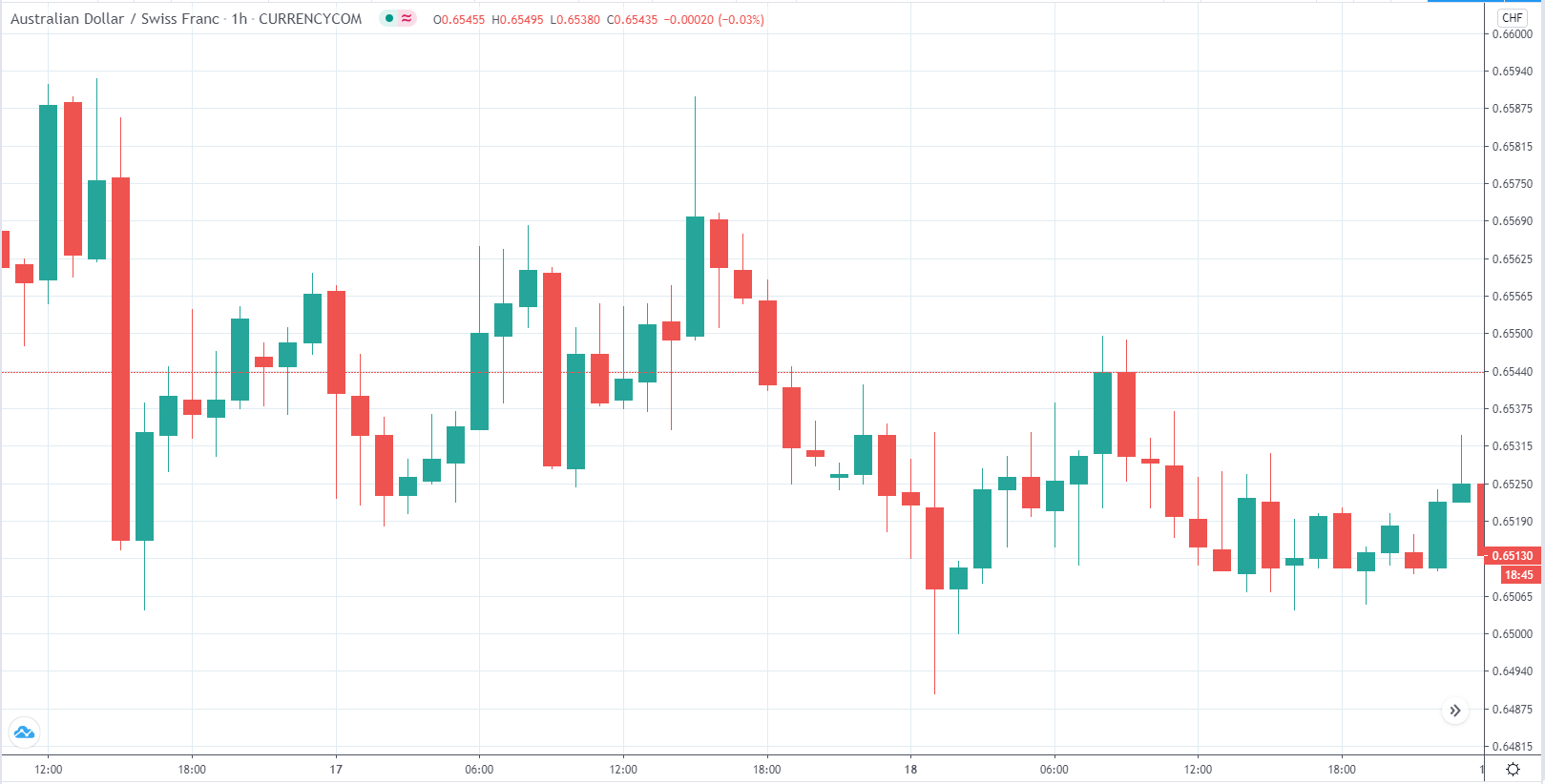 The above image is AUD/CHF pair, and here also, no potential trading opportunities are building up until June 19th, 2020. 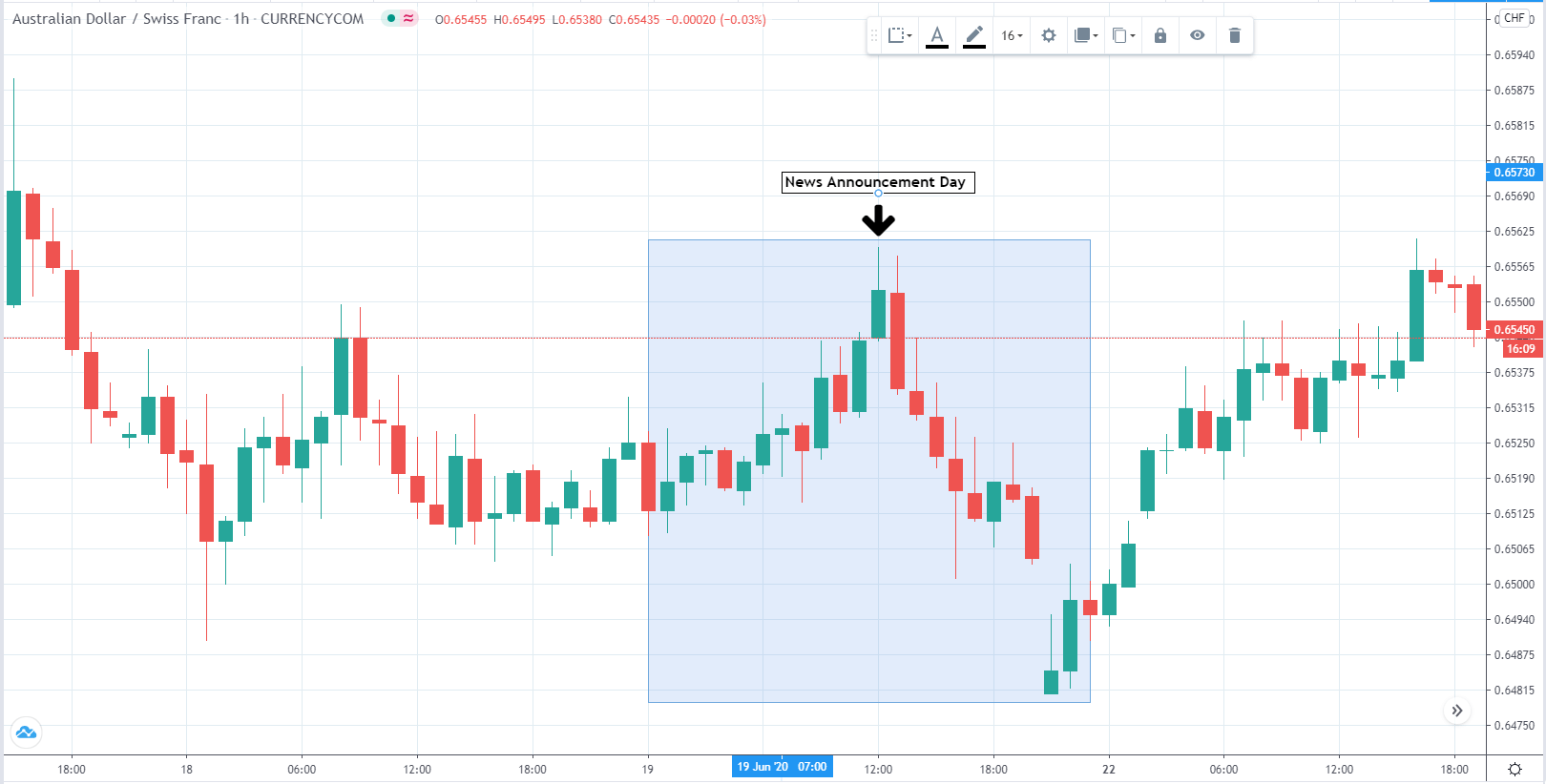 The above image highlights the news announcement, and we see that the news did not move the currency in favor of AUD. The AUD/CHF continued to stay in the same range as before the news release day.

Overall, in all the three scenarios, we see the minimum wage economic indicator despite coming in favor of AUD; the market impact was negligible. The market is aware that it is a low impact indicator and affects only a specific section of the labor force.

Hence, changes in minimum wages of a country do not translate to its currency volatility, as already confirmed through our fundamental analysis. Moreover, it is a yearly statistic, and the corresponding effects of increased minimum wages will be captured through monthly indicators better.