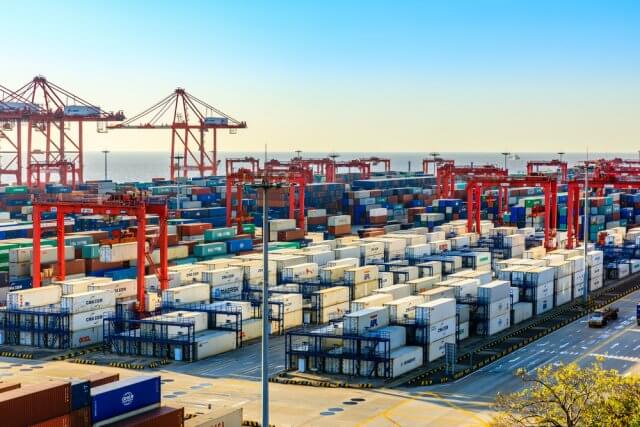 What are Imports by Category?

Imports: They are the goods or services purchased that were produced outside the domestic country. Imports are purchased goods or services from foreign markets. Imports are required for many reasons and inherently constitute a nation’s trade balance. In importing, foreign goods or services come into the country while domestic currency goes out into the international market. A country in general imports when it is more efficiently produced or is cheaper in other countries. It may also import when the nation is unable to produce or meet the required demand.

A country will have numerous corporations that would have requirements for foreign goods or services, and hence the country’s valuation of imports would be in millions and billions. Hence, while importing millions and billions of domestic currency goes into foreign markets where currencies are exchanged for various reasons. Suppose a country wants to import goods or services from another country. It generally pays it in the exporting country’s currency. Hence, during export, currency comes into the country, and products go out, and during imports, the currency goes out, and products come in.

How can the Imports by Category numbers be used for analysis?

When a country’s imports exceed its exports, it is said to have a negative trade balance or trade deficit. Based on the geographical location, technological and business setups, different nations will have a competitive edge in different sectors. For instance, countries like Venezuela, Canada, or Middle Eastern countries are naturally sitting on abundant oil reserves. Hence, it will export oil to countries that do not have such reserves.

Companies may often require raw materials that are more cheaply available from other countries. For instance, companies in the United States might import electronic goods from China, which is cheaper. Hence, such companies may put up bulk order imports and trade takes place. Hence, what a country needs it may import and what it produces it can export.

The international market is decentralized and operates through free-market forces that keep economies in natural equilibrium. Currency exchanges can take place for genuine business transactions or speculative purposes also. When exchanges occur for purely business reasons, we call them fundamental moves in the currency pairs. These fundamental moves give currency their volatility along with speculation from investors.

Understanding a country’s Imports by the Category of products can help us track the fundamental moves. When significant transactions related to import or export takes place, it induces volatility into the currencies. During a considerable import, the international market is flooded with importing the country’s currency, and due to supply exceeding demand, the currency value falls.

On the other hand, when a country exports a massive volume of goods, the corresponding transaction would withdraw a large sum of that country’s currency out of the international market. When demand exceeds the supply, the currency value appreciates. Scarcity appreciates value and oversupply reduces value. Hence, a country must maintain a “balance” in its trades, i.e., the monetary value of all its imports and exports should ideally cancel off. In reality, it is not so, and this imbalance in different country’s trade balance gives currencies the volatility which traders are always looking to capture.

Understanding the economy’s portfolio of imports can help policymakers also in identifying exceeding dependencies in other countries. Too much reliance on foreign countries for goods or services is not suitable for the economy. The more a country is dependent on other countries, especially for basic needs like energy and food, the less it has control over its economic growth and currency valuation.

Countries that depend on fewer categories of imports and exports have more concentrated risk in terms of currency volatility. Countries like AUD and NZD show more volatility in general than currencies like USD and EUR because of the diverse portfolio of exports and imports of the latter currencies.

Imports by Category of goods or services is not an economic indicator, but it is necessary to facilitate an understanding of international trade balance amongst currencies. It directly does not impact any currency volatility but is a requisite to base trade analysis amongst currency pairs. Changes in imports by Category does not frequently change as most trade agreements are made for multiple years on end. Any changes in trade composition in terms of Category will be priced through leading economic indicators and news releases.

In the United States, the Census Bureau tracks the import and export data categorized by trade partners and products. The lists are ranked based on trade volume, deficits, and surpluses, etc. Monthly and year-to-date data are two types listed for all its trade partners.

Sources of Imports by Category

We can find the Census Bureau data on its Top Trading Partners. We can find the percentage of statistics consolidated for most countries for imports by Category on Trading Economics.

Imports by Category News Release – Effect on the Price Charts

The Imports by Category report released by the Australian Bureau of Statistic has minimum to negligible impact on the value of the Australian dollar.

The Imports report published on July 02, 2020, stood negative 6%, beating the previous number -10%. Even though the numbers are not up to the mark, they have recovered to a great extent from the previous month’s readings.

From the below chart ranging from 2016 to 2020, the Australian Imports hit a new low to -10% for the May report. However, it shot up 4% higher the following month.

Focusing on the left side of the chart, we can see that the market is in an uptrend and is currently consolidating.

On the day of the report release, the impact in the volatility of the currency was insignificant. However, later through the month, the Australian dollar got stronger and continued its uptrend. This indicates that, despite the disappointing number overall, the AUD saw strength as the number beat the previous month report by a significant margin. 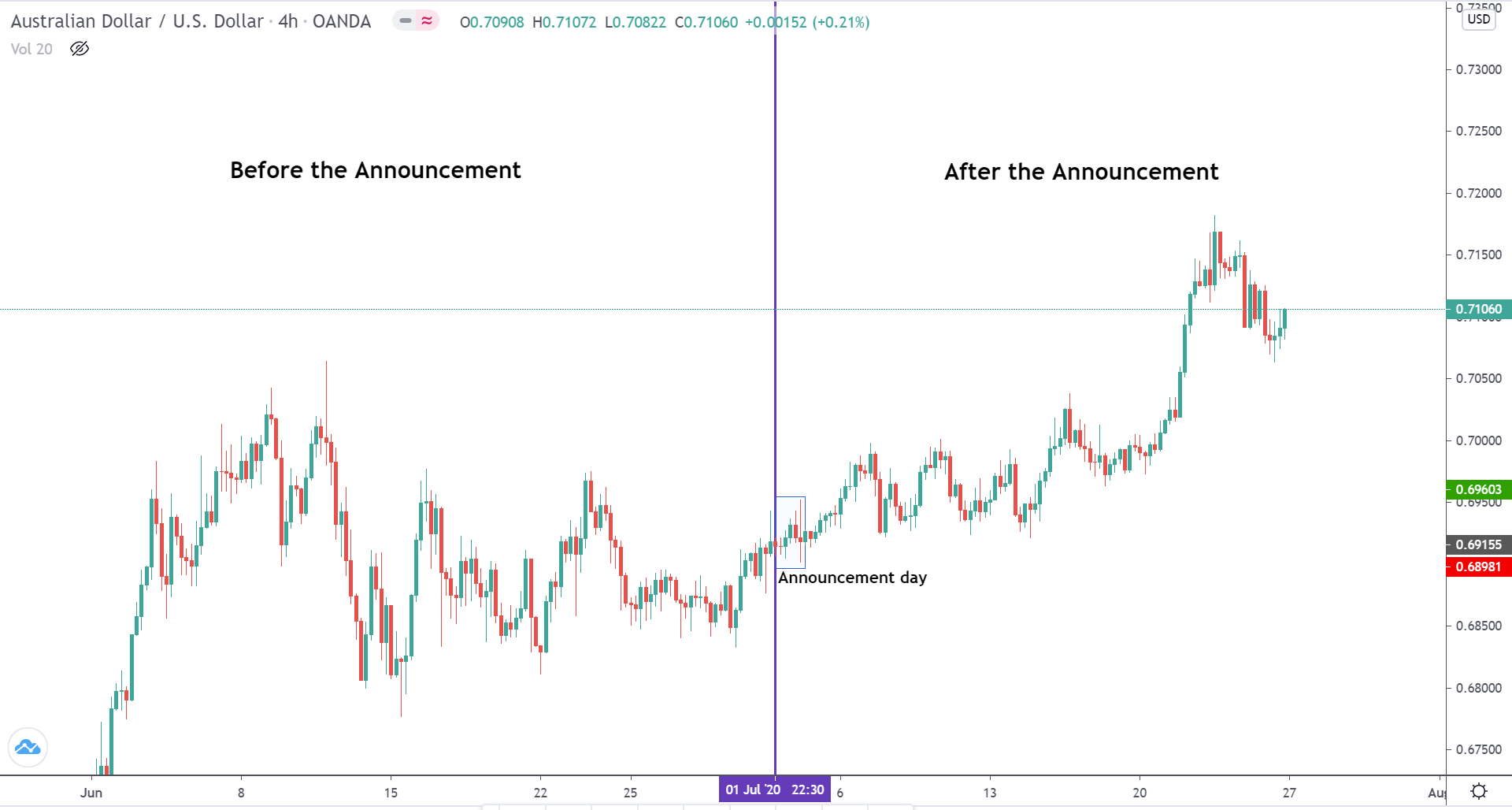 Before the news released, the market was in a range for an entire month.

On the day of the announcement, the market tried to inch above the top of the range but failed. However, in the subsequent trading sessions, volatility picked up, and the price made a higher high. Hence, we can, to an extent, conclude that the AUD had a positive impact on the Imports by Category numbers. 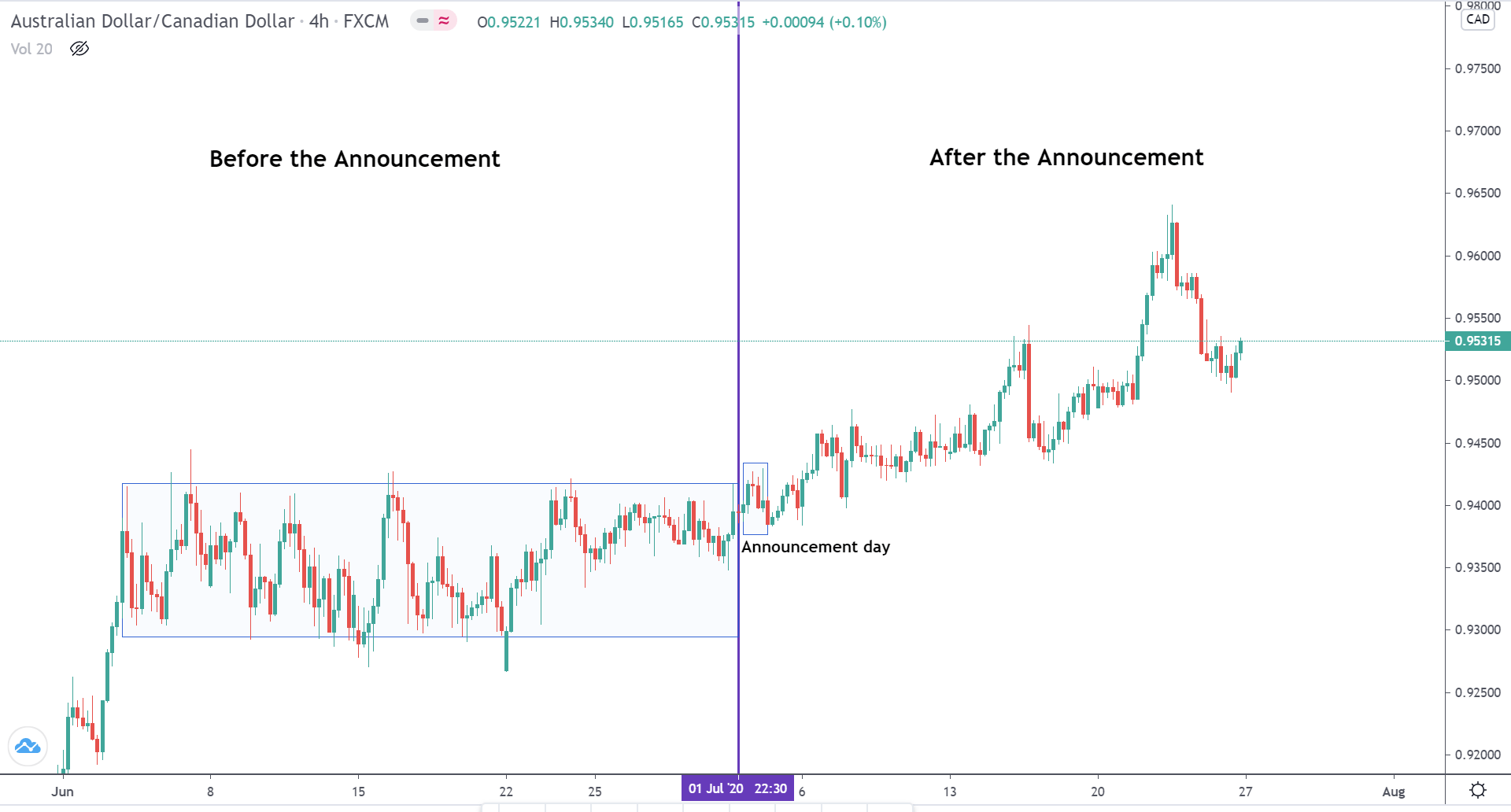 In the below chart of AUD/JPY on the 4H time frame, we can see that the market is in a strong uptrend. It made a high to around 77.000. The prices were in a pullback phase, the whole month of June.

On the day of the report announcement, the market barely had any impact in terms of volatility. That said, in the following weeks, the price rallied up to the previous high of 77.000, indicating AUD strength. 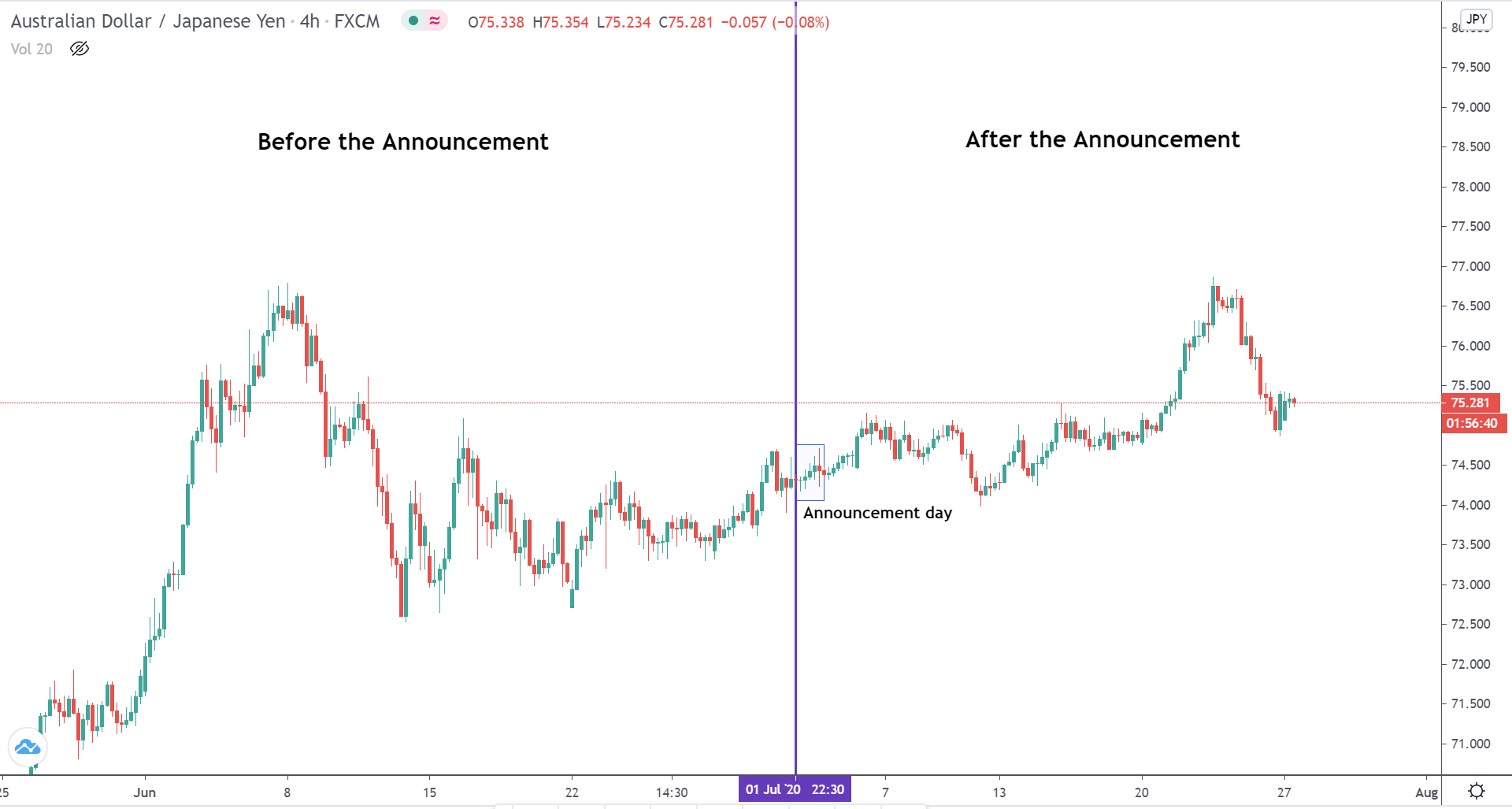 Therefore, we can conclude that the Australian dollar had a feeble effect during the news release day but did have a positive impact on the report in the subsequent trading sessions. Cheers!