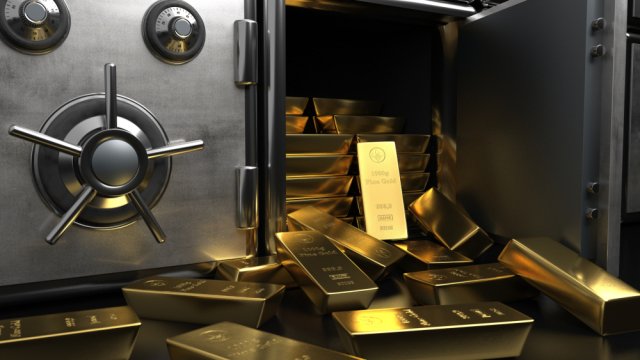 Gold is one of the most precious metals on the planet. In the field of monetary assets and currencies, Gold is like a nuclear warhead among all weapons. Throughout history, this yellow metal has always held its place as a secure financial investment. For a certain period in the international markets, it backed the major currencies like the United States Dollar.

Even though today’s currencies are no longer backed by any metal and are free-floating fiat currencies, countries still own and purchase gold year after year in tons. This shows that it is still one of the important financial assets of many countries. Change in Gold Reserves will have an impact on the nation’s currencies. Hence the study of the same is important for fundamental analysis for traders and investors.

What are Gold Reserves?

Most of the major nations which participate in international trades through export or import maintain a certain proportion of foreign currencies to hedge their currency at times of hyperinflation or deflation to manage their exchange rate at a fixed level, thereby not incurring losses on exports or imports.

Up until a few decades ago, the Gold was used to back up the legal tenders of many countries. Today’s world is run by Fiat currencies, which can be printed as much as required by a government as the United States did before the Vietnam war, which led to the crashing of Bretton wood’s agreement. If, in a hypothetical case, let us say the United States dollar is no longer accepted as a legal tender in the global market, then the United States cannot buy or sell goods and services using their currency. Still, they can sell their Gold in exchange for the same.

The exposure of a currency to the market trends volatility, economic crisis makes it an unsafe form of wealth, which can depreciate over time. In this regard, Gold has always proven that it can hold its ground even during a major economic crisis and continue to appreciate to match with the inflationary trends. At times of economic crisis, extreme inflation, or deflation, which results in currency depreciation of a nation, investors, and people, in general, tend to run towards Gold as a safe financial bet.

The International Monetary Fund (IMF) tracks and keeps the statistics of all assets of a nation as reported by various countries, which are then used by the World Gold Council (WGC), who are responsible for keeping up the demand and supply for Gold in the global market.

The data is obtained from the Central Bank’s Balance Sheets and compiled by WGC and releases monthly. They also provide historical data about the same for various countries to compare and analyze side by side.

How can the Gold Reserves numbers used for analysis?

Gold is not an abundant metal on the planet, and its rarity, along with unique lustrous yellow radiant color and other physical properties, has always kept it in demand in the market of jewelry, trades, and particular instrument designing sectors.

Gold is seen as one of the standard forms of wealth to be passed on from one generation to another, meaning its value keeps rising with global economic growth. As economies become wealthier, the Gold price also tends to be costlier. The worth of Gold in that sense has always remained constant, i.e., a precious and expensive metal.

The Gold demand increases during times of high inflation, and because of the limited supply, the price of Gold increases against the currencies. In this sense, the countries which are a net exporter of Gold see their domestic currency worth appreciating. Countries that are importers of Gold see their currency worth falling against Gold. In this aspect, Gold is indeed still a form of currency, or we can say it is an alternate form of currency.

Nations purchase Gold from the Bullions market and store up just like an ordinary employee saves up money for future needs or as an emergency fund for a rainy day.  Major Nations increase their Gold Reserves in hundreds of tons per year as it preserves wealth better than most currencies, and also for their concern on long term economic health and growth of their nation.

Below is Gold Reserves numbers for prominent countries having high holdings. 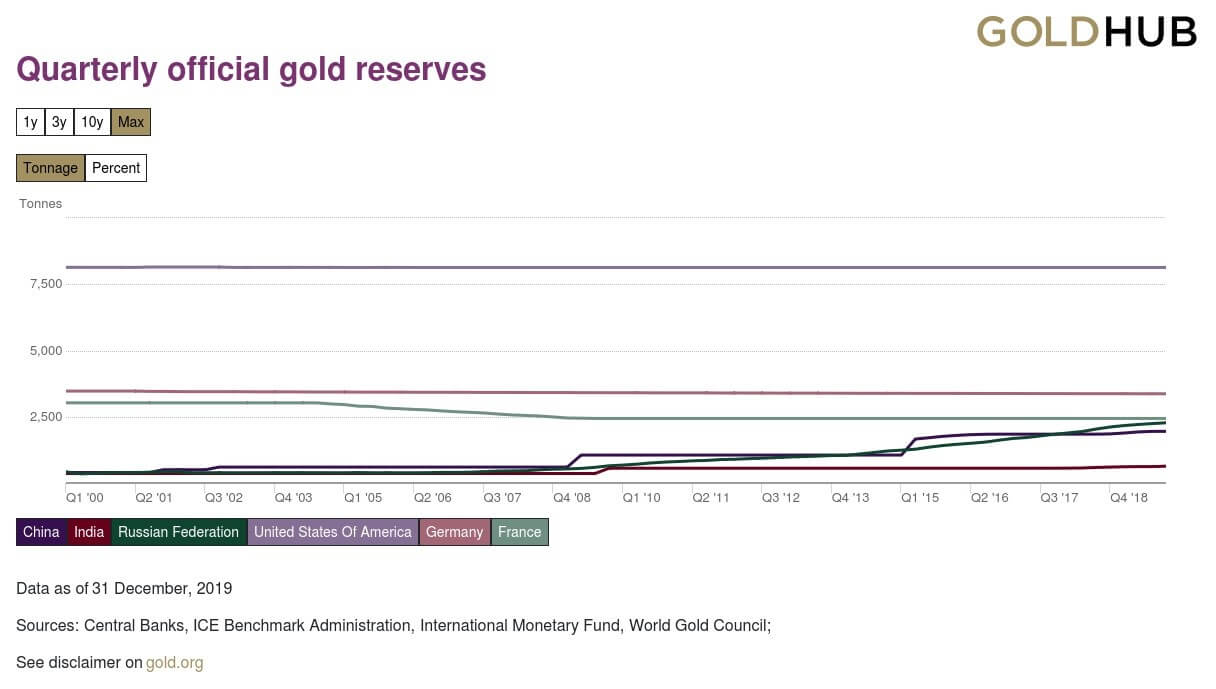 Above image is taken from the World Gold Council Official Website

A country with no Gold Reserves is exposed to all the risks associated with Fiat Currencies. Throughout history, there have been many currency crises where the dips have been so low that markets crashed, and governments collapsed, for instance, the Black Wednesday, which pushed the Sterling pound out of European Exchange Rate Mechanism.

Countries having substantial Gold Reserves numbers can face economic crises without market crashes, and the system collapses. As at any time, they can sell their Gold Reserves to increase their Currency worth, and let it float back again in the market against other fiat currencies.

Investors who have invested in foreign companies in that nation’s domestic currency can eliminate the fear of his returns depreciating over time or during economic crises there if the nation has sufficient Gold Reserves. Traders who Carry Trade can also be sure of their deposits not being subjected to major shocks that lead to unexpected volatility in the short run as the country will be able to recover from this through their reserves.

Gold Reserves inherently indicate a nation’s capacity to bounce back from a crisis or to never go into one in the first place. This is the reason why the United States Dollar and Euros are one of the major pairs as their Gold Reserves are in the top five amongst the world due to which the volatility in the currency is so low, making it a safe bet to trade on.

Low Gold Reserves can lose the confidence of investors, which would further depreciate the value of an already weakening currency, thereby pushing the economy further down the drain of a crisis. In Conclusion, the higher the Gold Reserves, the lesser the volatility and vice versa.

We can monitor the Gold Reserves changes of various nations across the globe from the WGC monthly reports, and they can be found here. Global Reserves data of different countries can also be found here. You can also go through Gold Reserves of the Federal Reserve Banks of the United States history here. We can derive the same numbers from the Central Bank’s balance sheets or the National Bureau of Economic Research.

Impact of the ‘Gold Reserves’ news release on the price chart

Gold reserves play a major role in maintaining the economic stability of a country, and thus the government tries to own a lot of Gold. Some of the main uses of Gold include hedging against inflation and determining the value of import and export. The Gold Reserve of the country is released on a quarterly and monthly basis that shows the transactions carried out by different nations. Since the Gold Reserves held by a country is an important economic indicator, it said to have a moderate to high impact on the value of a currency.

The above image shows the previous and latest Gold Reserve data of India, which is published on the 1st of every month. A higher reading than before is considered to be bullish for the currency while a lower reading is taken to be bearish. India’s Gold Reserves was reported at 28.997 USD bn in Jan 2020. This shows an increase from the previous number of 27.831 USD bn for Dec 2019. The Reserve Bank of India is the official organization that provides Gold Reserves in USD.

The first pair with which we will start our discussion is EUR/INR, where the above image shows a ‘daily’ time frame chart of the same. We see that the market is in a range from more than three months and currently seems like it has broken out of the range. Since we don’t have any clue of the Gold Reserves data, we cannot take a position on any side of the market. Technically, we have broken above the range, and we need a suitable retracement to join the trend.

As the data is released and the market gets to know that the Gold Reserves were increased than before, we see a sudden drop in prices as a result of strength in Indian Rupee. But later, the price reverses sharply, making the candle to close in green. One of the reasons could be that since the market was in a strong uptrend, it tried to make its last move up and finally collapsed later.

The volatility is seen to increase on both sides. From a ‘trade’ perspective, here’s where the technical analysis should be combined with fundamental analysis. We cannot take a short trade until the price crosses below the moving average, which is a sign of reversal.

The above images represent the GBP/INR currency pair where we witness an extremely weak Indian Rupee, and just before the announcement, price is at the recent ‘higher high,’ which means this is the point from where the market fell. Without guessing what the Gold Reserve data might be, it is wise to wait for the news announcement and then take suitable action. However, one can still trade in ‘options’ to take advantage of high volatility when the announcement is being made.

After the news release, we see that the market drops, and the candle closes in red, which means there are high chances that traders may see the data as positive for the Indian economy and hence buy INR. Thus, as soon as the price falls below the moving average, we can go ‘short’ in the pair with a conservative target. Also, the price is in an area that could be a possible resistance.

After the announcement is made, we see that the price drops below as a result of an increase in Gold Reserves from the previous month. The sudden increase in volatility on the downside, making the price go below the moving average, may attract one to go ‘short’ in the pair. We can sell the currency pair, but the stop loss needs to be placed above the resistance. The risk to reward ratio of this type of trade would be around 1:1.

That’s everything about Gold Reserves and the impact of its new release on the Forex price charts. If you have any queries, please let us know in the comments below. Cheers.