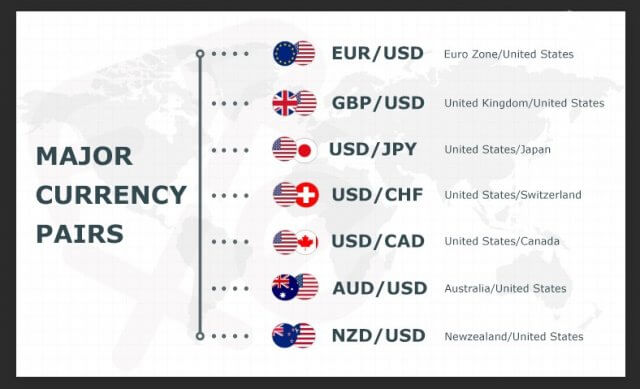 You have probably heard about most of the available currencies such as the US Dollar, the British pound, and the Euro, the three of these currencies are traded within Forex as well as plenty of others. Each currency in the world has its own ISO code, this is often a three-letter abbreviation of the currency, on the rare occasion, this may be a four-letter abbreviation. The letters given to it are often related to the overall title of the currency, but in some cases such as with the Swiss Franc, it can be completely different as the Swiss Franc has CHF as its ISO.

We have outlined some of the major currencies below, there are of course a lot of other currencies available, however when you are starting out with trading and the foreign exchange markets, then you will most likely be concentrating on these slightly more major pairs. 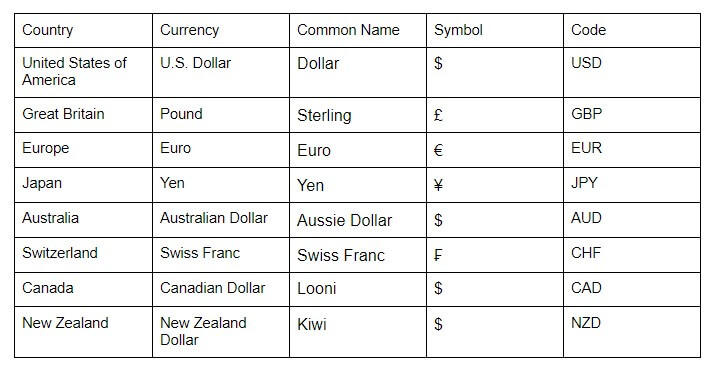 Each currency has its own value that fluctuates up and down, the value of a US Dollar is $1, it will always be $1. However, $1 is not equal to £1. At the time of writing this £1 was worth almost exactly $1.26. So in the foreign exchange world, it would be written as GBP/USD = 1.26. It is always written as the base currency first, then the quote currency, and then the current exchange rate.

You are able to both buy and sell currencies, so let’s briefly look at what that means, thy can be summed up with a single sentence each:

Buy or Long = When you buy the base currency and sell the quote currency.

Short or Sell = When you sell the base currency and buy the quote currency.

So how do we make money? Let’s say we want to make a profit on this, we would buy into the pair, which means that we would be buying GBP with our USD for the value of 1.26 US Dollars to Great British Pounds. We would then hope that the value of your point would increase, so the exchange rate would move up to 1.27 or 1.28 (of course there are a  lot of extra decimals in there too). If that was to happen, when we sell back, we would have more dollars than we started with, giving us our overall profits.

That is in essence how the currency pairs work. Of course, there are far greater complications when we start looking at pairs that are completely different to our base currency, the good news is that you very rarely have to ever think about that, the broker that you are using will luckily be able to do all of the thinking and calculations for you, so all you need to look for is the fluctuations in the exchange rate between currency pairs.

Hopefully, that has given you a little understanding of how things work, there’s a  lot to learn when it comes to trading, so it is good to sometimes keep things simple and to not give too much information at once. Take things one step at a time and you will manage to become successful in no time.