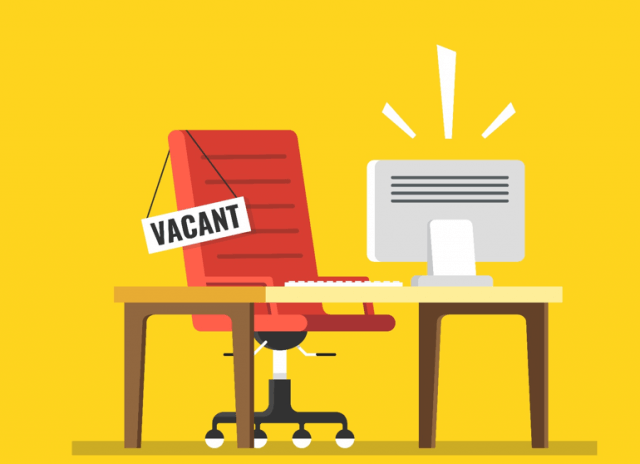 What are Job Vacancies

Job vacancies are the number of new gainful employment positions that are created within an economy at a given point in time. In order to establish the number of job vacancies, surveys are usually done on employers about their businesses, recruitment, and job openings.

Job vacancies are considered if: there is a specific open position with work available for it; the job could commence within 30 days of advertisement whether or not a suitable candidate is hired, and the employers are actively recruiting workers for that particular job.

Job Vacancies as an Economic Indicator

Employers within an economy are continually looking to hire new workers to fill positions in their organizations. As such, job vacancies are a leading macroeconomic indicator of unemployment and employment rates. Thus, the more the job vacancies are available, the more the number of people who stand a chance to be gainfully employed and thus, leading to a reduction in the unemployment rate.

How Job Vacancies Affect the Economy

Graph: 2019 January to December Scatter plot of US Job Vacancies and Real GDP. 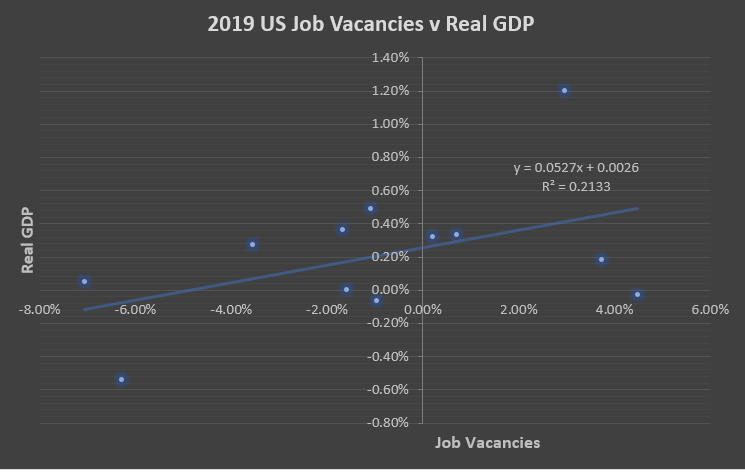 As seen from the above scatter plot, from January 2019 to December 2019, there was a direct positive correlation between the change in the job vacancies in the US and the change in real GDP.

Job Vacancies and Impact on the Currency

As already discussed, job vacancies serve as a leading indicator for employment and unemployment levels. An increasing number of job vacancies implies that unemployment levels are bound to fall drastically. A steep fall in the unemployment rate, which is accompanied by a full rate of employment will result in higher inflation. The higher inflation is because the employers are competing to hire workers hence pushing up the wages at a faster rate. Increased rates of inflation will trigger the government and central banks to employ contractionary monetary policies aimed at keeping the inflation rate in check.

When the central banks increase the interest rate, it is aimed at reducing the rate of inflation by making borrowing expensive while encouraging the culture of savings. Thus, for forex market traders, they can anticipate a hike in the interest rate levels when there is a consistent increase in the number of job vacancies. The higher interest rate has the effect of increasing a country’s currency valuation.

Conversely, a constant reduction in the number of job vacancies, which comes after a period of a sustained increase in the total number of job vacancies, implies that an overheated economy is cooling down. An overheated economy is characterized by a prolonged period of positive economic development and higher levels of inflation brought about by increased wealth generation.

Thus, after the government has employed contractionary policies following the overheating of an economy, it can consequently be expected that this period will be accompanied by asset bubbles and an increase in the prices of assets. Higher wages means that most employers may not be able to hire more workers and let go of some of the existing employees, resulting in a sustained period of lower job vacancies.

The economy can be said to have plateaued and headed for a recession. For forex traders, a falling number of job vacancies could signify an impending dovish monetary policy meant to stimulate the economy and prevent excessive deflation. The dovish policies have a negative effect on a country’s currency.

Although considered a low impact indicator, forex traders need to understand how job vacancies release impacts the price action. In the US, the job vacancies report is published by the Bureau of Labor Statistics by conducting Job Openings and Labor Turnover Survey (JOLTS).

JOLTS gives data on job openings, hires, and separations. The JOLTS report is released monthly about 40 days after the month ends. The latest, expected, and all historical figures are published on the Forex Factory website. The most recent release one can be found here. Job vacancies are advertised positions yet to be filled by the final business day of the month. A more in-depth review of the JOLTS numbers can be found at the Bureau of Labor Statistics website.

Below is a screengrab of the Forex Factory website. On the right, we can see a legend that indicates the level of impact the Fundamental Indicator has on the corresponding currency.

The snapshot below shows the change in the JOLTS numbers. In the latest release, the number of job openings increased on a month on month between May and June 2020 from 5.37 million to 5.89 million. The increase was more than the 5.30 million forecasted by analysts.

As seen on the chart above, we have plotted a 20-period moving average on the EUR/USD chart, which shows that the pair is on a strong downtrend. The steady downtrend is also evident from the fact that the candlesticks are just below the Moving Average. On the 15 minute timeframe before the release, between 1100 and 1330 GMT, the market is on a constant uptrend. This uptrend can also be observed in AUD/USD and NZD/USD pairs, as shown by the charts below.

It is evident that in such a period, going “long” in the market offers the best opportunity to take advantage of this short-term uptrend. However, since the general market trend is downward, we highly recommend following this trend.

The same reversal to a downtrend after news release can be observed for the AUD/USD and NZD/USD pairs as well. This trend is shown in the charts below.

The positive job vacancies news had a significant impact on the strength of USD against other currencies. This strength is because the better than expected job openings signify that the US economy is on a recovery path following the effects of the Coronavirus pandemic.