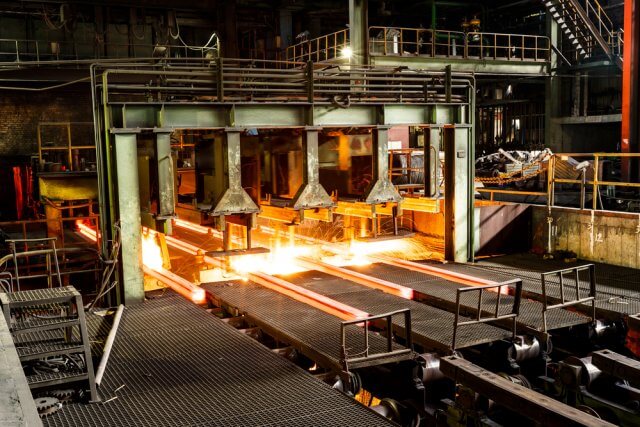 Steel is a commodity of paramount importance in today’s international economy. Steel is a staple for the modern economy, and its wide range of usage from the tiniest needles to the largest bridges and tallest buildings makes it an essential commodity for economic prosperity.

Steel is no less critical than Food and Energy for today’s modern world. The far-reaching utility and demand thereof of Steel makes it a good economic indicator for us to understand its impact on exporting and importing economies.

What is Steel Production?

Iron and alloying elements like carbon, chromium, manganese, nickel, and vanadium are added to produce different types of Steel.  Steel industry began in the late 1850s before which it was an expensive commodity that was exclusively used for armors and cutleries primarily.

After the invention of the Bessemer and open-hearth process, Steel Production became easier. By the 1860-70s, the steel industry started to grow rapidly and continues to do so even today. Steel is the most sought after commodity for its durability and strength. It is used for building heavy machinery in the world, like in cars and engines. The natural abundance of Iron and Carbon makes it an affordable commodity for large scale production and supply.

Today Steel is mainly produced through techniques called basic oxygen steelmaking and Direct Reduced Iron (DRI) in an electric arc furnace. Steel’s unique magnetic properties make it an accessible material to recover from the waste for recycling. Steel retains its properties even after undergoing many recycling processes. Hence, it is reusable and economical.

How can the Steel Production numbers be used for analysis?

On a standalone basis, the steel industry directly contributes about 3.8% to the total global GDP as per 2017 research. The indirect impacts meaning the industries that depend on steel production, contribute 10.7% to the global GDP.

The importance of Steel Production apart from its utility is that the supply chain of Steel is very long. The number of dependent industries way more than any other industry. As per 2017’s research by Oxford Economics for every two jobs added in the steel sector, 13 additional jobs are supported through its worldwide supply chain. About 40 million people work in this supply chain of Steel. Indirectly it supported 259 million jobs worldwide and was worth 8.2 trillion dollars in 2017.

Steel is a critical input in the work of many other industrial sectors that produce items essential for the economy to function like hand tools, complex factory machines, Lorries, trains, railway tracks, and aircraft. It is apart from the countless items from day-to-day life like cutlery, tables, cars, bikes, etc. Hence, the economic activity goes beyond the steel-producing locations to multiple sectors across countries. Some of the primary industries that use Steel are Construction, Electronic, Transportation, Automotive, Mechanical Equipment, Energy Production and Distribution, Food and Water, Tools, and Machinery industries. 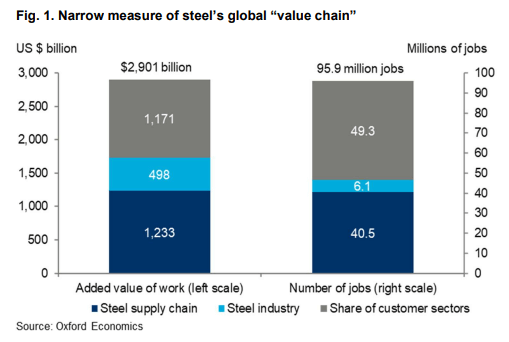 As the demand for Steel continues to rise, the exporting countries would be at a more significant advantage in terms of economic growth, as evident by below ongoing historical trend. 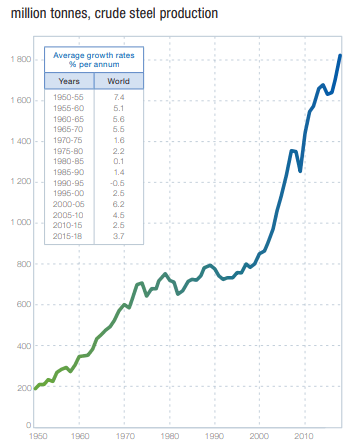 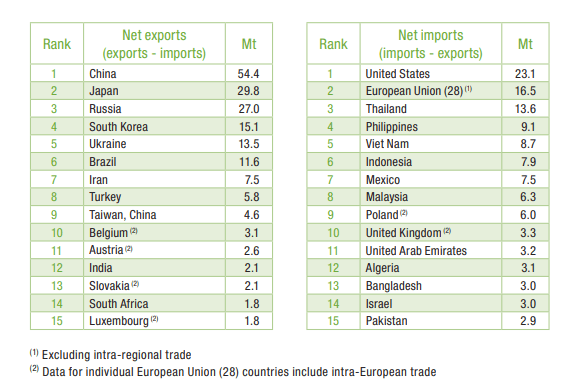 Hence, countries that are net exporters of Steel would be at a higher economic advantage in terms of its own consumption needs and revenue generation through exports. As economies continue to improve the standard of living of their population, the demand for Steel will continue to increase.

Steel production is a proportional indicator. An increase in production is beneficial for the economy and thereby for the currency. Steel is a global commodity produced worldwide. Hence, Steel Production figures are useful in identifying the long term megatrends and newly developing Steel industries that will have long term impact.

The short-term fluctuations within the Steel Industry itself would be recorded through other more extensive indicators like Industrial Production (IP) Index in the United States. It is a low impact indicator and is more useful for making long-term sector-wise investment strategies.

The World Steel Association represents about 85% of the total steel producers across the world. It aims to find global solutions to the environmental challenge to identify trends and bring together regional and national steel producers.

It publishes monthly and annual reports on steel production figures comparing economies in terms of exports, imports, contributions to global GDP on its official website. The monthly reports are usually published in the last week of a month for the previous month.

Impact of the ‘Steel Production’ news release on the Forex market

We saw how Steel Production plays a vital role in an economy with both economic and social impact. Steel is one of the essential materials for the construction of buildings and the manufacturing of many other materials. It creates opportunities in the innovation sector and in research & development projects around the world. Given such a wide range of applications, it is apparent that it has a fair amount of impact on the economy and on the currency. An in-depth analysis revealed that in 2017, the steel industry sold 2.5 trillion worth of products and created U.S. $500 billion value. The steel industry also supports and facilitates 96 million jobs globally.

In this article, we will be analyzing the impact of U.K. Steel Production on the British Pound and witness the change in volatility during the official news announcement. The below image shows the latest Steel Production data in the U.K. produced in the month of April. A higher than expected reading is taken to be bullish for the currency. Contrarily, a lower than expected reading is considered to be negative.

We shall start with the GBP/USD currency pair for examining the impact on the British Pound. In the above price chart, it is clear that the overall trend of the market is down, but recently the price has pulled back quite deep. This is an indication that the downtrend may be coming to an end, and this could turn into a reversal. We will take a suitable position in the market based on the news release.

After the news announcement, volatility increases on the downside in the beginning, but later, the price reverses and closes in the green. The buyers push the price higher owing to positive Steel Production data, and the price forms a ‘hammer’ candlestick pattern. The Steel Production news release produced moderate volatility in the currency pair and, lastly, strengthened the British Pound. We need to be careful before taking a ‘buy’ trade as the major trend is down, and the impact of this news is not long-lasting.

The above images represent the GBP/AUD currency pair. Before the news announcement, the market is in a strong downtrend, and recently the price has pulled back is very gradual in nature. The price action suggests that the market might continue its downtrend and so we will be looking to sell the currency pair after noticing some trend continuation patterns.

After the news announcement, the price reacts mildly to the news data where it nor sharply moves higher nor crashes below. The Steel Production has a slightly positive impact on the pair and lately the volatility to the upside. One should not forget that traders do not give much importance to this data, so one cannot expect the market to continue moving higher. As long as we don’t see trend reversal patterns in the market, an uptrend is far away.

The above images are that of the GBP/CHF currency pair, where we see that the market is in a downtrend, and lately, the price is has retraced to the ‘resistance’ area. With this, the market has also shown some trend continuation patterns indicating that the downtrend will continue at any moment. If the news release does not change the structure of the chart, this can be an ideal chart pattern for taking a ‘short’ trade.

After the news announcement, the price initially falls lower, but buyers immediately take the price higher, and the candle closes with a wick on the bottom. Although the volatility is low after the announcement, the market is moving on both the directions and produces a neutral effect on the currency pair.

That’s about ‘Steel Production’ and its impact on the Forex market after its news release. If you have any questions, please let us know in the comments below. Good luck!