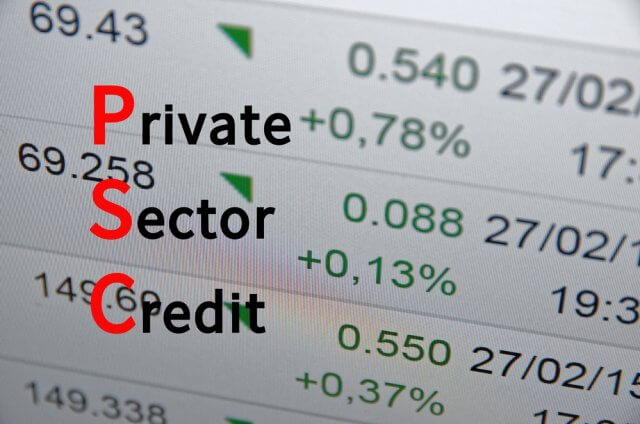 Changes in Private Sector Credit and the nominal values can be used to assess the recent economic stability and oncoming trend. It is an indicator of economic health and can be used as a broad metric to know the overall economy’s liquidity and rate of economic growth. Hence, Private Sector Credit can be utilized as an economic indicator for our fundamental analysis to double-check our current assessments and forecasts.

What is the Private Sector Credit?

How can the Private Sector Credit numbers be used for analysis?

Private Sector Credit is affected by the following factors:

Interest Rates – Higher interest rates from financial institutions can discourage private business firms from taking credit. As the credit becomes “expensive,” it drives out the small businesses’ chances of obtaining credit. Only the top-tier institutions may be able to borrow the credit. The Interest Rates that are prevalent in the market is influenced by the Central Bank’s interest rates. In the United States, it is called the Fed Funds Rate. Hence, Central Authorities also play a key role in loan affordability for the private sector.

A loose monetary policy, where Central Banks inject money into the market through open market operations (purchasing bonds, securities), increases the liquidity of the banking sector, which slowly passes on to other sectors of the economy. It decreases the overall Bank Lending Rates and encourages people and businesses to avail credit. It is generally called a dovish approach.

In a tight monetary policy, Central Banks withdraw money from the economy by selling bonds, securities to decrease liquidity. It results in Banks increasing their short-term interest rates. It encourages people to deposit and save more than borrow and spend. It is generally called a hawkish approach.

Credit Rating – Every individual and corporation has a credit rating that tells the worthiness of the candidate for credit. It measures the risk associated with defaulting on the credit. A high credit rating indicates the risk of default is very less, and banks would be willing to lend more, and even in some cases, at a lower rate. A bad credit rating, in most cases, prevents banks from lending, while some institutions may prefer to lend less, or at a higher interest rate than the market rate for the risk associated.

The Credit Rating is backward-looking; it looks at the candidate’s credit history. The good performance of the business is possible in a healthy economy and vice-versa. Hence, past economic health also influences current credit scores. Economic health, business performance, and credit ratings are interlinked, in a feedback loop, one affects the other.

Property Prices – Since Credits are mostly backed by collateral in the form of assets like real estate, or houses, an increase in the property prices creates a wealth effect. It gives a positive sentiment for the financial institutions to lend resources to the private sector, be it consumers or business firms.

Government Backing – When businesses are backed by Government support, lending is also easy. It is more observable in developing economies, where Governments actively support private businesses to boost employment rates, wage growth, and overall economic growth. The government in developing economies may assist in land acquisition for business set up or disburse loans at cheaper rates to the corporate firms.

Increase in Private Sector Credit indicates the financial institutions are confident about the past and current economic conditions and predict that the economic stability shall continue for the near future, at least. When the confidence of financial institutions is deteriorated by inflation fluctuations, unstable markets, banks increase deposit rate interests, to promote saving, thereby increasing their liquidity, and refrain from lending to a significant extent.

Tight lending environments are symptoms of a weak economic growth rate. An increase in the real GDP growth rate has been observed to be followed by increased Private Sector Credit. In turn, this increased credit helps businesses to increase employee staff, improve productivity. It overall increases economic activity and further assists in the GDP growth rate. Hence, both feed-off each other. Slowdowns also feed-off each other, and it accelerates the stagnation or economic downturn. In such cases, the Government or Central Bank intervention is crucial to keep the economy going.

The Private Sector Credit is not market sensitive, changes in the figures build up over time, and hence, it is a low impact indicator for predicting short-term currency moves within a 1-2 month time horizon. It is useful for assessing a long-term economic trend, though.

The World Bank maintains the Domestic Credit to Private Sectors in the form of an online database on its official website. Statistics are added once individual countries’ statistics are reported.

For the United States, Private Sector Credit data is maintained by the St. Louis FRED, and that information can be found here. World Bank Private Sector data is available here.

We can find Private Sector Credit statistics for many countries in nominal terms and as percentages of GDP here.

Now that we have a clear understanding of the Private Sector Credit economic indicator, we will now watch the impact of the news announcement on various currency pairs and analyze the data. Private loans measure the change in the total value of new loans issued to consumers and businesses in the private sector. To an extent, the allowances will determine the growth of the private sector.

Thus, the higher the government and banks lend to companies, the greater will be the development. The investor considers this data to be an important parameter when making large investment decisions in a currency or in the stock market. However, when it comes to short term movement of the currency, traders don’t pay a lot of attention to the data.

We shall begin with the EUR/USD currency pair and examine the impact on this pair. In the above image, we see that the pair is in an uptrend, and just before the news announcement, the price has is at its highest point. Depending on the reaction of the market to the Private Sector Credit news, we will be able to take a position in the market.

After the news announcement, we witness a lukewarm reaction from the market, and there is hardly any change in volatility. This is because the Private Sector Credit was nearly the same as before with an increase in a mere 0.1%. This cannot be considered as a major boost to the private sector as the government and banks did not increase lending of loans by a vast percentage. As the impact was least, one can trade the pair on the ‘long’ side by joining the uptrend.

The above images represent the EUR/NZD currency pair, where we see that before the news announcement, the market has displayed reversal patterns, and there is a possibility that the market might turn into a downtrend. If the news announcement does not increase the volatility to the upside and price does not cross above the moving average, one can some ‘short’ positions expecting a further downward move.

After the news announcement, the price moves higher by a tad bit, and the ‘news candle’ displays little volatility. As the price remains below the moving average and impact was not great, one can take a risk-free ‘short’ trade in the market with a stop-loss above the recent ‘high.’

Finally, we will discuss the impact on the EUR/CHF currency pair. Here, we see that the overall trend of the market is up and recently the price has started moving in a ‘range.’ Before the news announcement, the price is at the bottom of the range, and thus a buying pressure can come back into the market at any moment. As the impact of Private Sector Credit is less, aggressive traders can ‘long’ position in the market as the price is at the lower end of the range.

After the news release, volatility expands on the upside, and the price closes with a huge amount of bullishness. The Private Sector Credit data proved to be very positive for this pair, which resulted in a sharp rise in the price to the higher side. After the close of ‘news candle,’ traders can go ‘long’ with stop loss below the support and a ‘take-profit’ at the resistance of the range. We cannot have a much higher ‘take-profit’ as the impact will not last long.

That’s about ‘Private Sector Credit’ and its impact on the Forex market after its news release. If you have any questions, please let us know in the comments below. Good luck!