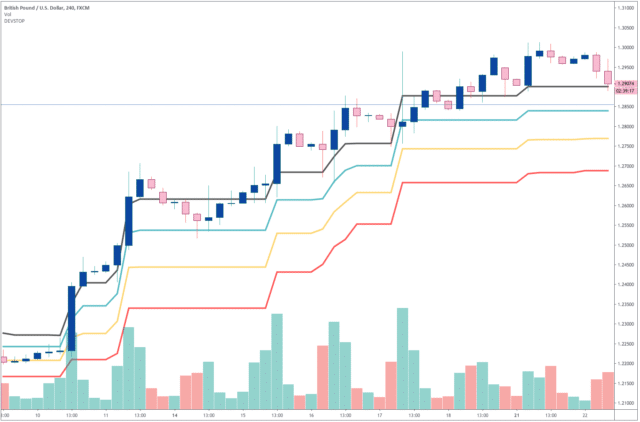 The stop-loss setting is a crucial component to the long-term success of a forex and crypto trader. The market forces cannot be adapted to the wishes of traders. Successful traders must accept that fact instead of fighting it for the sake of being right. “What cannot be cannot be, and, furthermore, it is impossible,” said some time ago, a well-known politician in a phrase that did not pretend to be comical. But it states a clear fact: Fight against the markets is like Don Quixote fighting Windmills.

In previous articles, we explained John Sweeney’s MAE method, and also average true range-based stop-loss settings. In this article, we are going to talk about Cynthia Kase’s Dev-Stops.

Cynthia Kase is a well-known and successful futures trader, speaker, and author of several books on trading and technical analysis. She conceded high importance to stop settings. Cynthia says something undeniable to most of us, Technical literature has mostly focused on entries, and almost nothing on entries besides some words on stop-loss or trailing stops. She says that this is like teaching how to drive a car but without explaining where the brake pedal and how to press it.

In her book “Trading with the Odds,” she explains that this situation is mostly due to greed and fear. Traders don’t like to lose, and most of them don’t know when to get out of a trade. Also, she explains that fear of losing causes people to hang on their losses in the hope the market will turn and recover them. Another explanation for this situation is that the beginning of technical analysis was on the stock market, and no company wants its stock downgraded from buy to hold or, worse, to sell. As opposed to Forex, only a handful of people make money shorting stocks, so exits are much less critical on the stock market.

Stops based on fear and greed

Most traders want to squeeze out the most of a trade. Therefore, they decided to use the highest possible leverage. To reduce the dollar risk, they desire to put it as close as possible to the entry-level. But, as said earlier, using obvious levels of support/resistance and set the stop order just two or three pips below is absurd. Better send your money directly to the charity, since they will make much better use of it than the institution that is going to collect your hard-earned money for free.

Risk is imposed by the market

The critical point is not to impose our conditions on the market, but read what the market is telling us in terms of Risk. In trading, Risk is proportional to volatility. Your dollar risk is the amount the price can move against you in a given interval, times your position size.

Volatility is measured using the Range and also by the standard deviation of prices on an annualized basis. One standard deviation of the price holds 68$ of all the potential price movement if we assume prices are dispersed in a gaussian distribution. That means that a price that goes against a trade by one standard deviation it will encompass 34% of the observations (the other 34% would go in the direction of your trade). The problem with using volatility is that a yearly measurement of the price variations does not help with sudden short-term volatility changes. That’s the reason for using ATR instead.

The concept of the threshold of Uncertainty

A trade is a bet on a market trend. We think a particular trend is in place. Ideally, the direction is a straight line between one initial level and a final level. If we think of the short-term price wiggles as random noise, we adapt our trade by placing our stops far enough away from the trend mean to include noise. The magnitude of the noise means we don’t want to exit at the minimum turn against the trade. The trader needs to devise a way to follow the trend while getting out when it ends.

Using a fixed multiplier for the True Range is an initial approximation. In our article of true range, we used a fixed 2X multiplier to set our stop order away from the market noise. Kase’s Dev Stop uses what she calls the skew of the volatility, the measure at which a range can spike in the opposite direction as a multiplier of the range measure. That makes the Dev-stop an adaptative trailing stop. Dev Stops is a well-known indicator in TradingView. Also, it is available for downloading at the MQL5.com site for your Metatrader workstation. 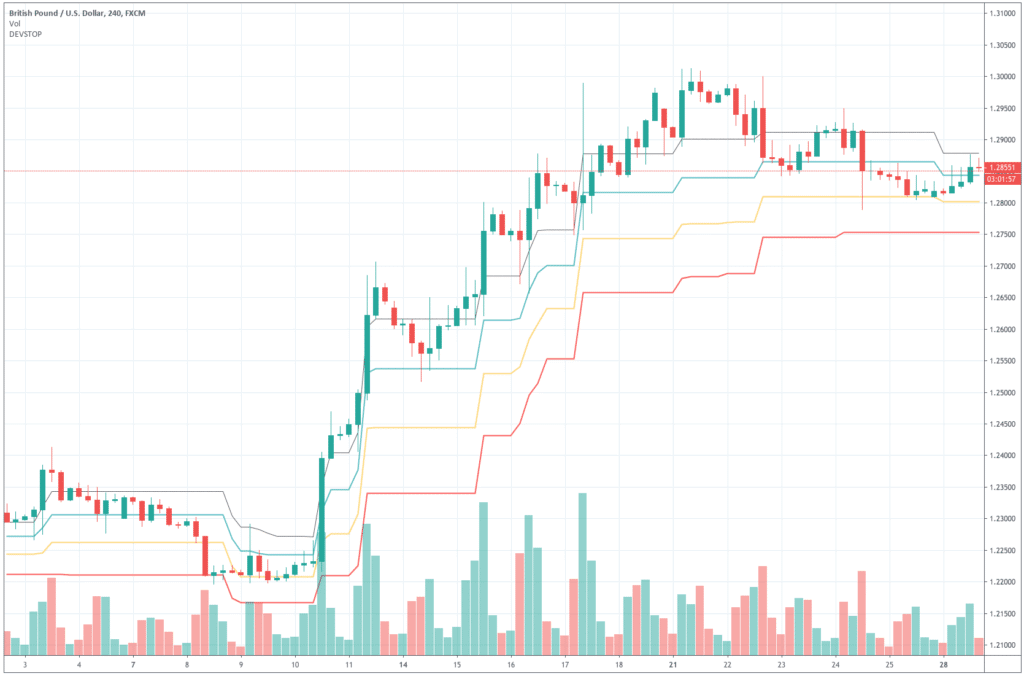 We can see in Chart 1 that four lines follow the price action. The first one is the mean line and the 1, 2, and 3 standard deviation (SD) lines of a two-bar reversal. As we can see, the 3rd standard deviation is seldom touched, being the 2-SD the conservative method, and the 1-SD the preferred aggressive method. In the case of using 1SD, it is advisable for a reentry plan, or create mental stops that would trigger if the close happens below the 1SD Dev-stop line.

As it should be the norm when learning a new method, it is strongly advisable to backtest it first to assess which SD line works better with your particular asset and objectives. Also, after backtesting your optimal solution, it is prudent to trade it using a demo account. There we could also assess the costs and benefits of the method by adding the brokerage costs.

Reference: Trading with the Odds, Cynthia A. Kase. 1996, The McGraw-Hill Companies Inc.