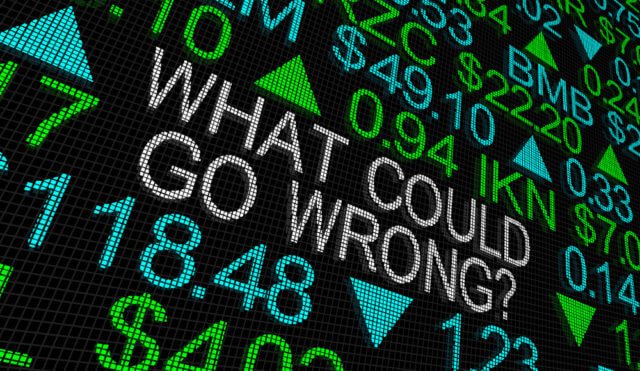 What is the MAE

Maximum Adverse Excursion (MAE) is a method of analysis for automatic or discretionary trading systems that allow us to objectively improve the overall operating result by positioning stops based on the statistical analysis of the development of operations from its inception to its closure.

When we study a trading system, we often find losses. Sometimes these losses are recurrent and lead us to reject a system or some of its rules. Here, the proposal is that instead of doing this, we approach the problem in another way.

Let’s analyze the winning trades and, above all, those that ended in losses. Are there any common features in them? Can we detect any pattern that makes us think we are in front of something usable?

There is a truth that in any trading system we must accept inescapably. At some point, we have to cut our losses. Of the many methods used for this purpose, the most common of all is price action when it distances itself from the meaning of our trade.

We will track the price path during positive trades and along those that end in losses. The idea is to check the typical route of each of them and in this way, find the best way to place the system stop to achieve a better risk to reward ratio.

We will call “excursion” to the price range traveled by the price from our entrance to its end. We will distinguish the two possible directions:

Maximum Favorable Excursion: (MFE) It is the biggest advance of the price from our entrance to the exit.

Maximum Adverse Excursion: (MAE) It is the maximum retreat of the price from our entrance until the closing.

Let’s see an example of how this methodology works. 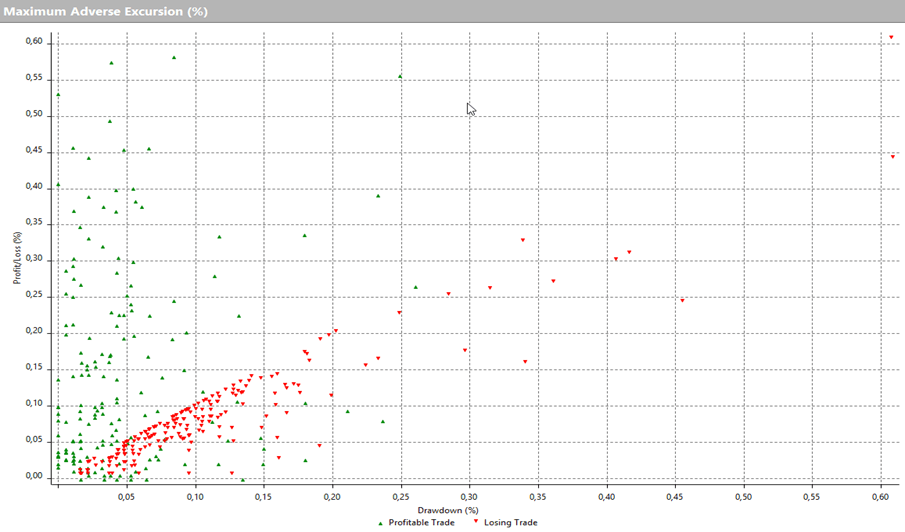 Graph of a system without stops that operates on the DAX

The statistics of this system before making changes are as follows.

Based on the above results, we set the stop at 0.105% of retraction, and now it looks like this. 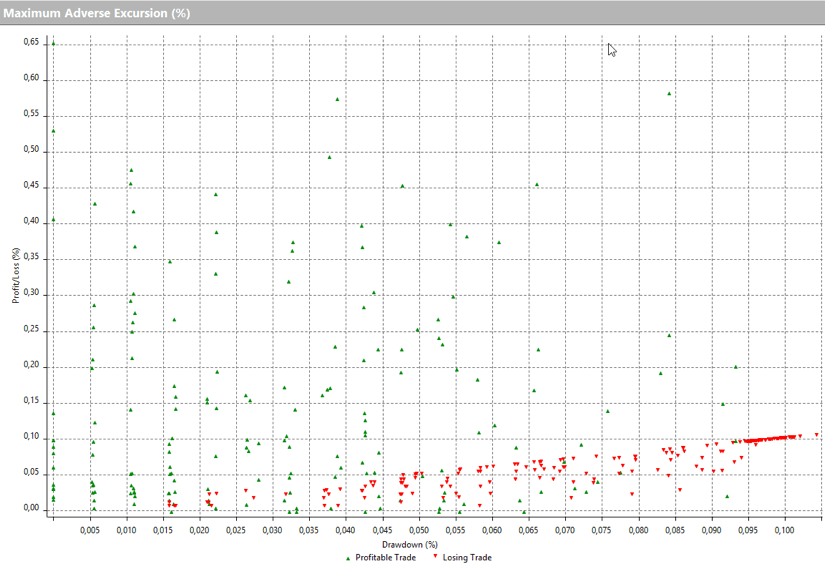 The statistics are as follows:

By applying a trailing stop to the system, we can improve some statistical data that will help in the general computation. The use of this type of stop is delicate because it is very easy to be touched by a momentary price retreat. However, its use at a sufficiently loose distance can prevent a trade that is very advanced from becoming lost. In our case, the average loss on the losing trades improve from 167 to 158, and the percentage of winning trades increases slightly in both the long and short sides. It would read as follows:

Now to advance the robustness of the system, let’s look at the Maximum Favorable Excursion (MFE) by looking at the following graph. 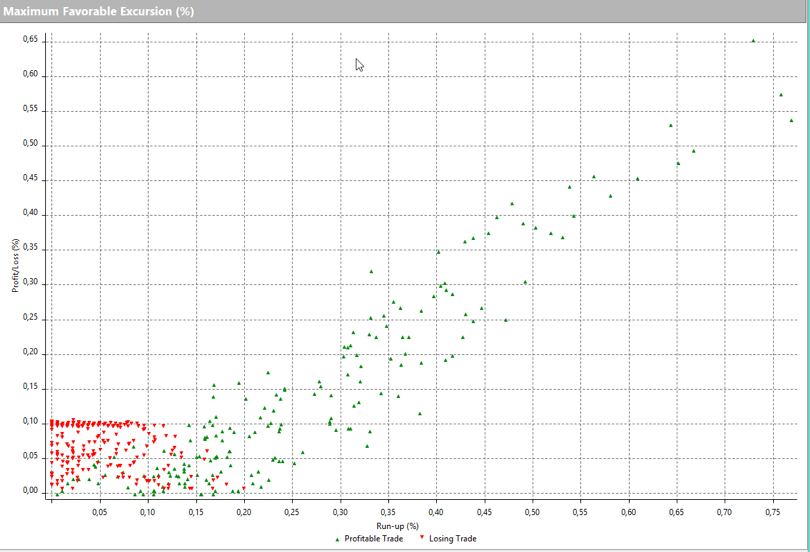 We see the effect of the Trailing Stop. The trades advance far beyond the point at which they finally close. This is normal using this type of stop. Adjusting them further usually leads to a worsening of the final result of the set.

In the following chart, we see the effect of setting the Trailing Stop 50% closer. 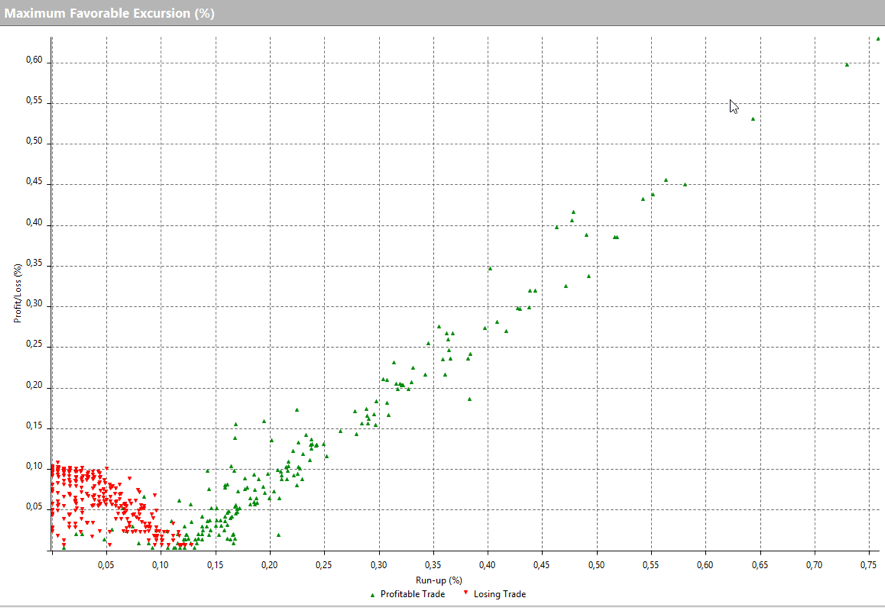 Although it seems better, the total gain is worse, and the drawdown increases.

You can then compare the two options statistics, which leave no doubt.

The MFE is found by monitoring the maximum reached during positive operations. Often, we find that our trades end very far from this point. Obviously, our goal must be to get them to stop as close as possible to the MFE. In each particular case, we cannot expect to always close at the absolute maximum. In this case, the methods of traditional technical analysis based on indicators often betray us by getting us out of the market ahead of time or, on the contrary, keeping us while the point of maximum profit goes away.

By searching the MFE, we can detect the most likely area that the winning trades will reach. In this way, we should place our profit target at a point that’s the most probable, statistically speaking. This won’t make our system jump to an absolute possible maximum profit. However, it simplifies the system and makes it more robust by shortening the exposure time to the market.

Finally, a sample of the effect of adding a profit target, taking as reference the MFE. In this case, we separate the behavior of the MFE in the bearish bullish trades since, in the case of indexes and stocks, the market does not usually show symmetry. Experience tells us that there are different characteristics between bull markets and bear markets, although there are authors who question it. 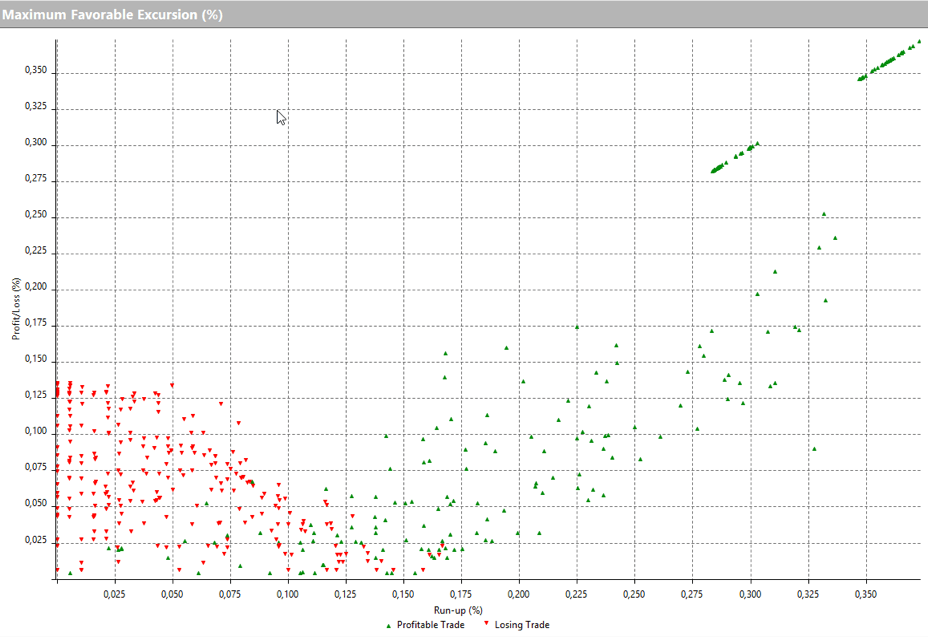 What you see is a performance improvement. Although the improvement in net profit does not seem too important, the maximum streak of losses decreases a lot. This procedure reduces the capital necessary for its implementation, and therefore, there is a substantial improvement in percentage profitability. It also increases the net profit and especially the Profit Factor.

Another concept to evaluate is the Minimum Favorable Excursion. It is to detect the minimum point of advance from which it is unlikely that the price returns on our entrance. This will allow us to move our stops to break even, upon reaching this area and prevent it from ending up in losses.

The statistical method proposed by the MAE and MFE study is revealed as a fully valid system for the study and improvement of any trading system. The use of Maximum Favorable Excursion charts gives us a way to distinguish winning trades from losing trades since they behave differently.

We can see very quickly if there are exploitable behaviors. The behavior of losing trades has its own patterns. It just advances a tiny amount in favor of the entry and then moves against it, and this allows to act consequently by cutting the losses at the right spot where statistically winning trades didn’t reach.

On the other hand, the traditional use of pivots as a reference to locate stops usually leads to losses, since it is the first place where the market seeks liquidity as it minimally weakens a trend.

Finally, the MFE allows us to put the trade into break-even at the right time or even add positions in a favorable environment. It also facilitates the tracking of profit targets. In any case, it is a highly recommended study method to improve automatic or manual systems.