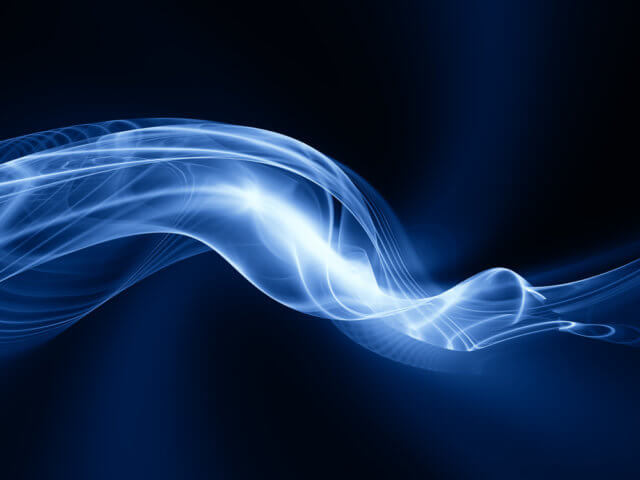 In this educational post, we will review the third rule on the use of retracements in the wave analysis devised by Glenn Neely.

The third rule occurs when wave 2 (W2) retraces precisely 61.8% of wave 1 (W1). This scenario tends to be somewhat confusing to analyze because when the price retraces to 61.8%, there is the same likelihood that the structure in progress is an impulsive or corrective formation. 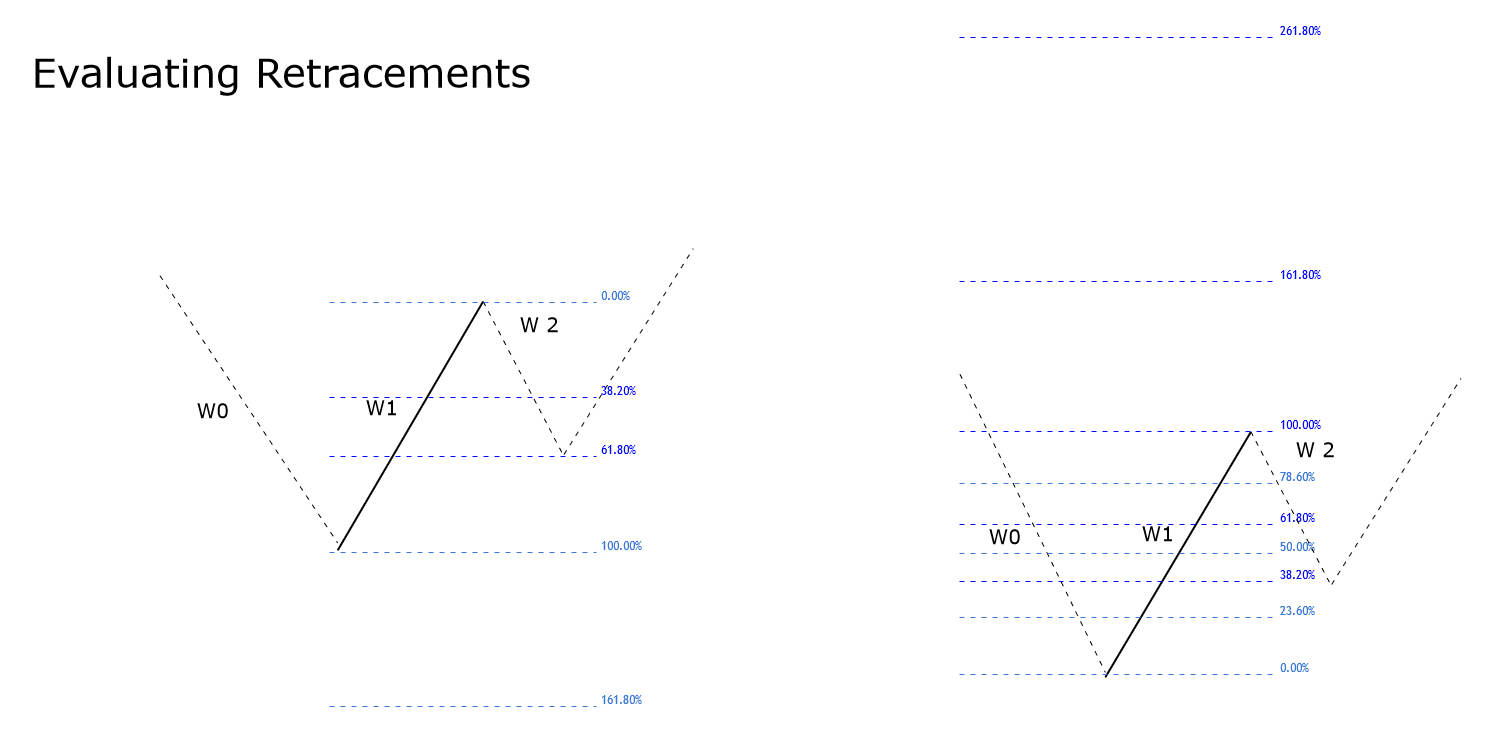 Once the retracement of W2 is compared with the height of W1, the wave analyst should evaluate the length of W0 relative to W1. From the resulting measure, several potential scenarios follow, each meeting one of the six following conditions. 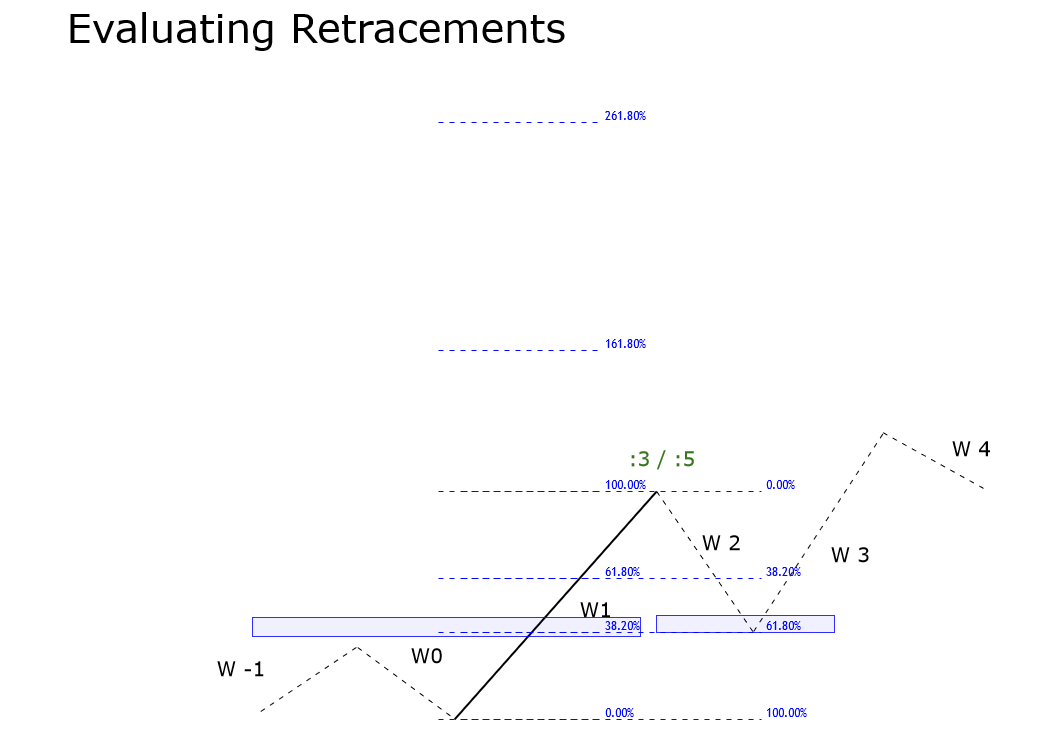 Condition “b”: this condition occurs if W0 is higher or equal than 38.2%, and lower than 61.8% of W1. Considering the lengths of waves “3” (W3) and “-1” (W-1), W1 could be the end of a zigzag pattern inside of a complex correction; in this case, W1 should be identified as “:5”. There is another possible scenario when W1 is part of an ending pattern of an impulsive structure; for this setting, W1 should be tagged as “:3”. 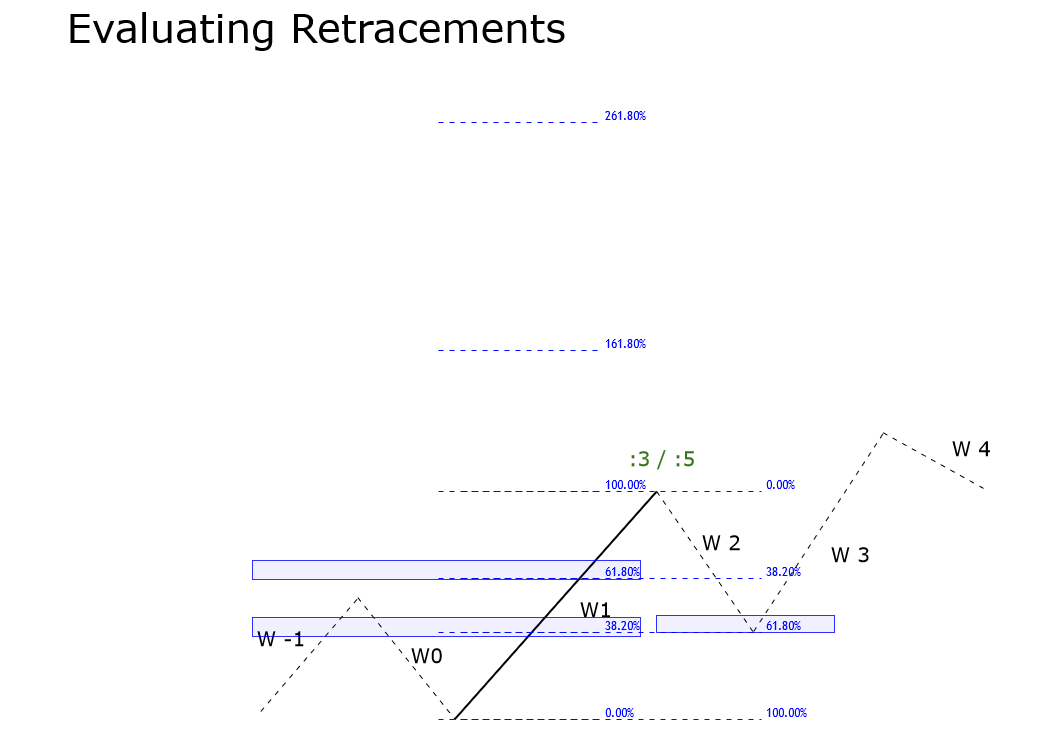 Condition “c”: this condition arises when W0 is higher or equal than 61.8% and lower than 100% of W1. In this scenario, W1 could be part of a corrective structure, like a Flat or Triangle pattern. In consequence, W1 should be identified as “:3”. When the length of wave 3 (W3) is shorter than W1, W1 could be the end of a zigzag pattern, and W1 should be labeled as “:5”. 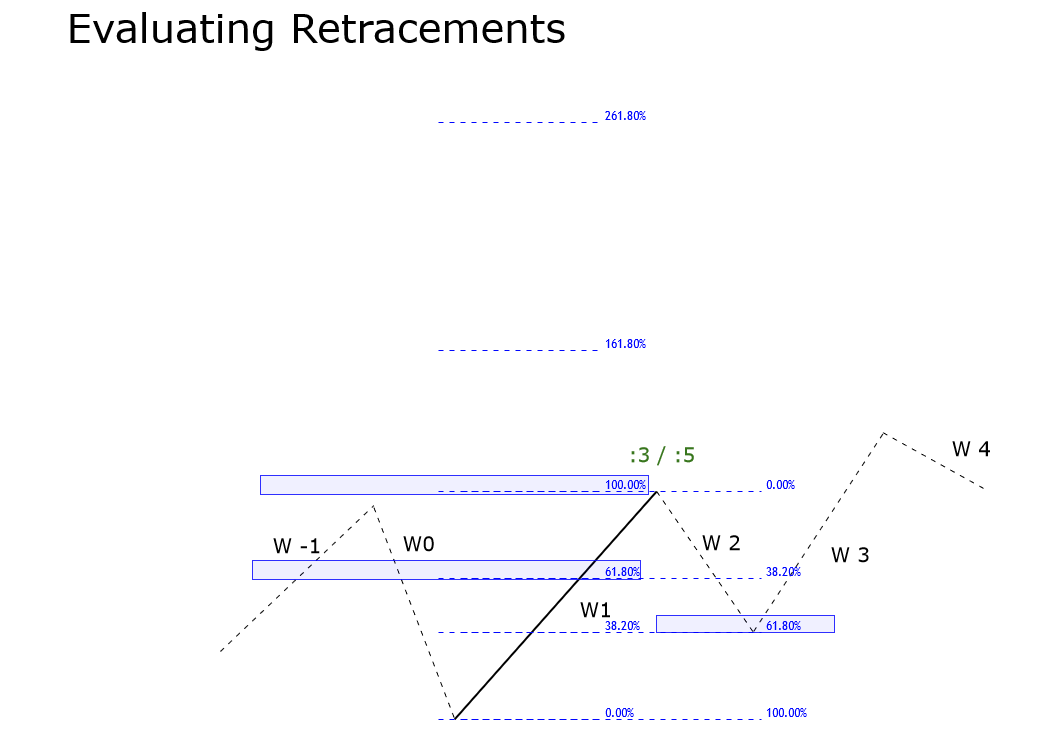 Condition “d”: this condition appears when W0 is higher or equal than 100% but lower than 161.8% of W1. Depending on the lengths of waves W2, W3, and W-1, W1 could be the first segment of a zigzag pattern. In this case, W1 will be identified as “:5”. In another instance, W1 could correspond to a section of a triangle structure or the central part of a flat pattern. If the wave analyst faces this scenario, it should identify to W1 as “:3”. 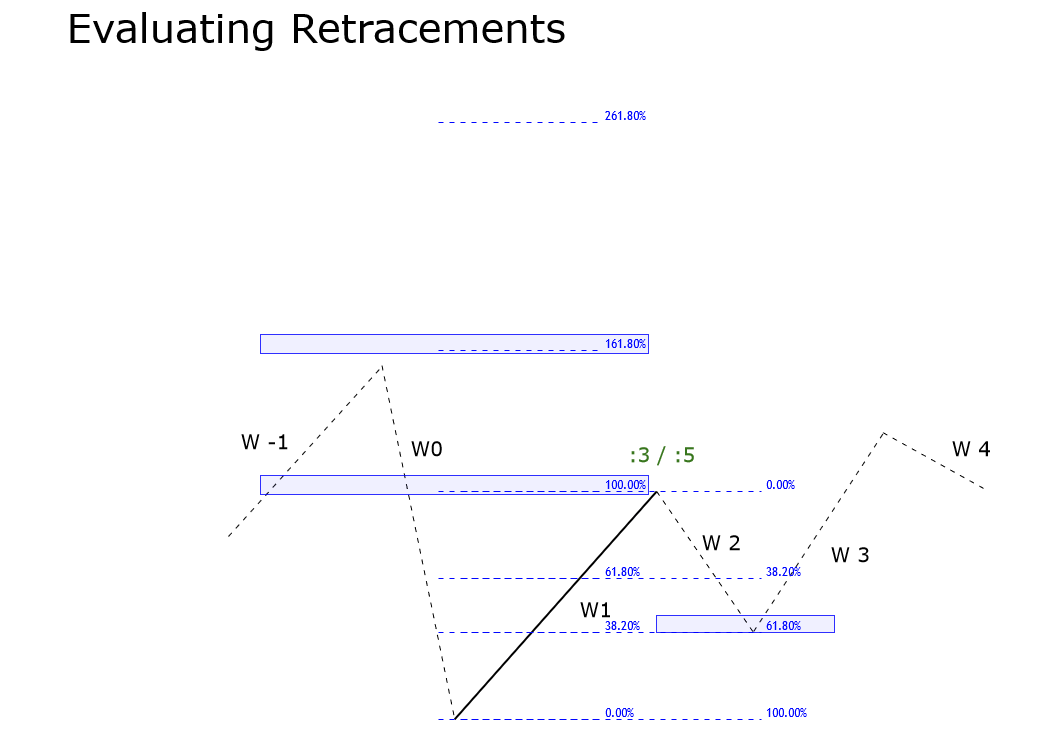 Condition “e”: This condition occurs when W0 is between 161.8% and 261.8% of W1. In the same way as with the “d” condition, W1 could correspond to the first segment of a zigzag pattern. Therefore, W1 will be identified as “:5”. The second possibility is that W1 could be the central section of a flat formation that concludes in a complex corrective pattern or a segment of a triangle formation. In this case, W1 will be tagged as “:3”. 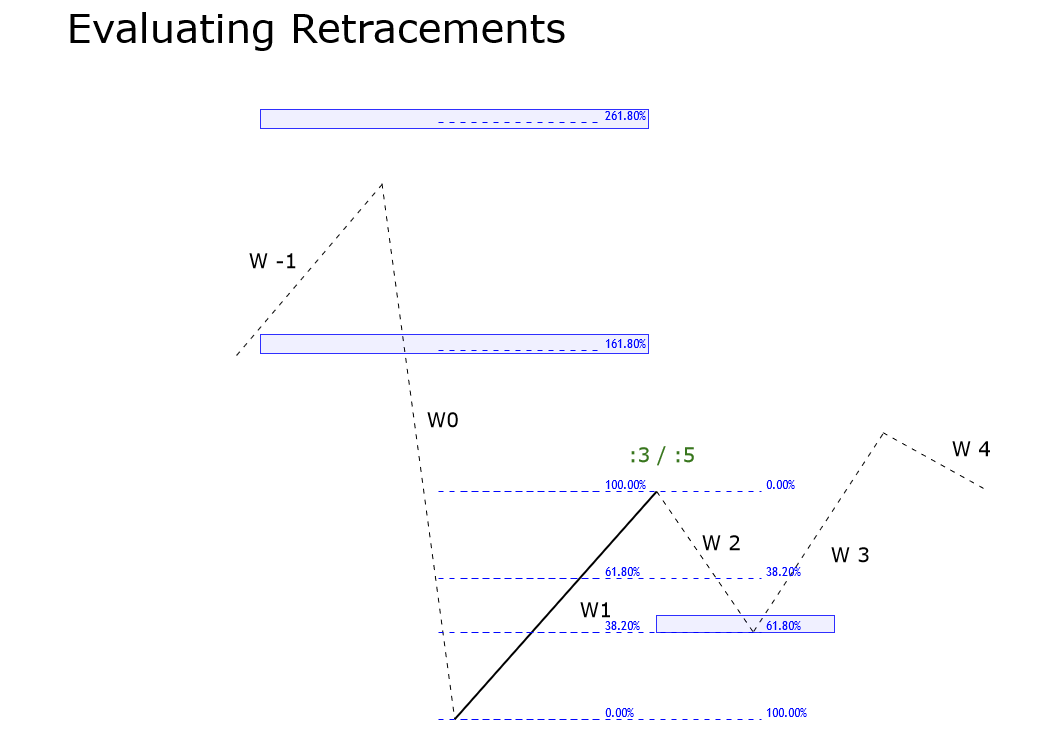 Condition “f”: this condition occurs when W0 is higher than 261.8% of W1. In this case, it applies the same identification alternatives for W1 as a “:5” or “:3” described in the previous conditions. In other words, W1 could be part of a zigzag, flat, or triangle pattern. 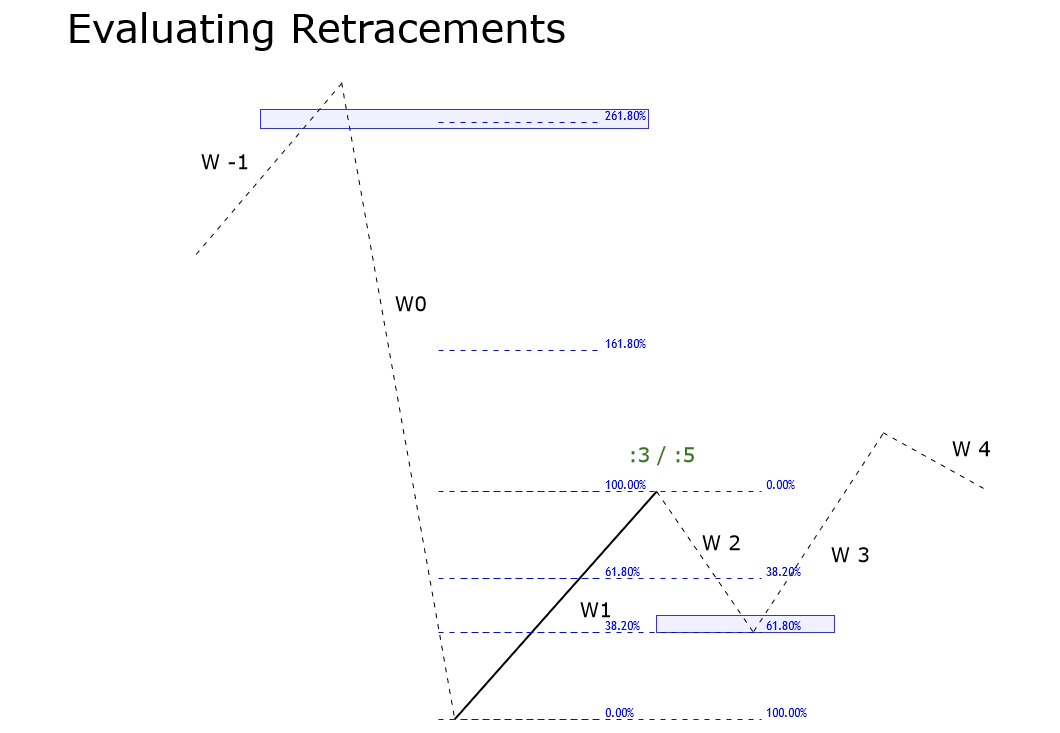 The third rule studied in this article, reveals that this case corresponds mainly to a corrective formation. On the other hand, during the preliminary wave analysis, it is relevant to study the context in which the price action advances.

In the same way, although there are three kinds of basic corrective structures, as the price advances, the wave analyst must discard the options that couldn’t correspond to the Elliott wave formation. As said by R.N. Elliott in his work ” The Wave Principle,” the knowledge of the corrective structures provides the student an edge to visualize the potential next move of the market.