How to trade the Swizz Franc

The Swizz Franc, known among traders as the Swissie, is one of the major currencies, with the USDCHF being the sixth most traded currency pair. It is considered to be a safe haven currency, where investors will often buy the currency in times of Risk-off, or market uncertainty. The Swiss National Bank decided to artificially peg the Franc at 1.20 against the Euro in 2011 because the Swizz policymakers wanted to stop the Franc from being too strong because it was hurting its exports.

However, in January 2015, the SNB suddenly severed this artificial cap, without fair notice, which sent shock waves through the market and where the Franc currency spiked in value and where the EURCHF plunged from the artificial cap of 1.20 to 0.85. Many investors, traders, and institutions were caught out, with the broker Alpari going bankrupt and where some traders had their accounts blown and where they went into negative equity due to this unprecedented move.

Since then, the currency has stabilized and where the USDCHF pair is nowadays less volatile compared to other currency pairs, and this, of course, makes it difficult to trade from a technical standpoint. Things that affect this pair are decisions by the US Federal Reserve and the Swiss National Bank and their respective gross domestic product estimates, unemployment data, industrial growth figures, and national debt.
Despite previous turmoil with the currency, the bottom line is that investors continue to see the Swiss Franc as a safe haven currency, and this is being born out in the markets at this time because of the Coronavirus epidemic.
And while the risk associated with trading this currency, from a historical standpoint, would be that the SMB has proven to be ruthless and unsympathetic when setting policy decisions and clearly they do not want a strong currency, nevertheless the markets have decided to heavily buy the Swiss Franc which is at a 16 month high at the moment, where the USDCHF pair decreased 0.0060 or 0.62% to 0.9634 on Friday, January 31 from 0.9694 in the previous trading session. 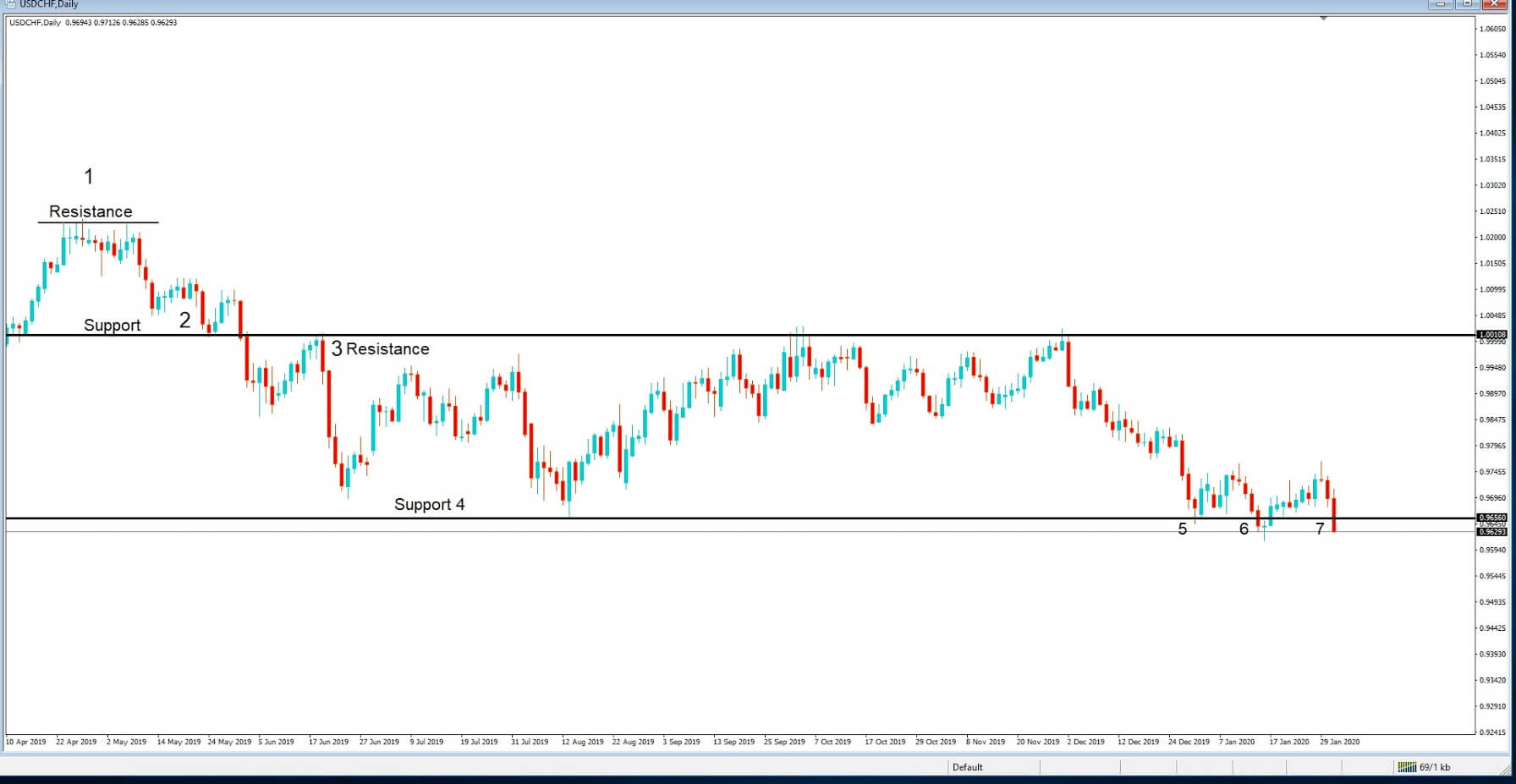 In example A, which is a daily chart of the USDCHF going back to April 2019, the pair has, for the majority of this period, been stuck in a sideways action after rejecting the high of 1.02 at position 1. This keeps in line with our notion that this pair has been fairly steady throughout this period. We can see clear support and resistance at position 3 and position 4. However, when we come to position 5, there is no bounce higher from the support line back up to the resistance line. We simply see price action fairly muted and then having a second attempt to pierce through the support line at position 6, which was short-lived. But the bullish candlestick and more convincing pierce of this support line at position 7 falls into line with our theory that the Swiss Franc is being bought as a safe haven currency at this time. And therefore, traders should be looking to this support line, subsequently becoming an area of resistance and with a possible continuation to the downside perhaps to 0.95. 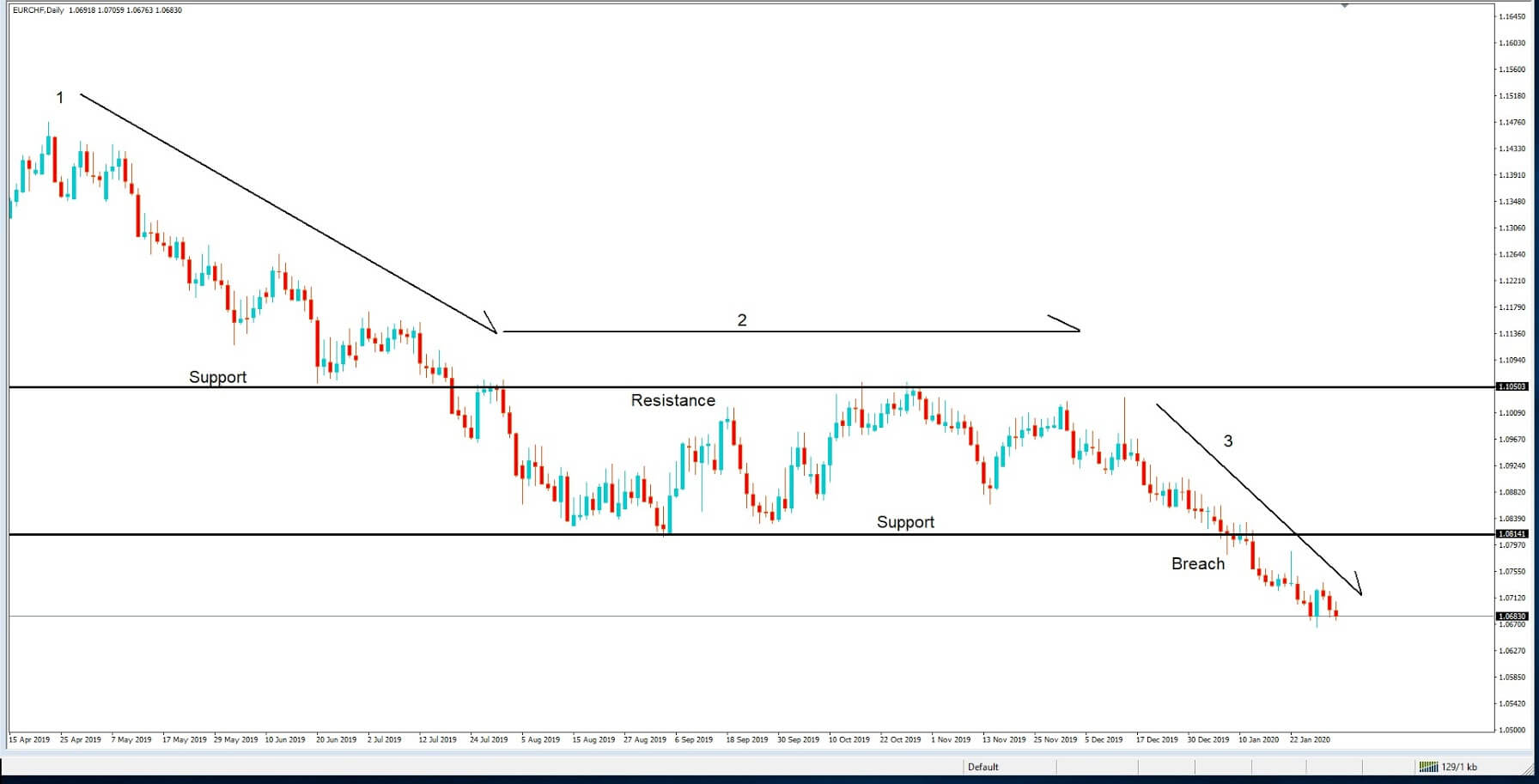 Example B is a daily chart of the EURCHF pair. Having looked at the previous chart, it is fairly straightforward to see what is going on with this pair. We have an overriding move lower with the pair at position 1, and where a support line has subsequently become a resistance line, with sideways price action at position 2, and where at position 3, price action has continued its move lower and reached the support line, which temporarily became an area of resistance before being breached and then moved lower.

Therefore this chart backs up our beliefs that we should be looking for opportunities to buy the Swiss Franc in the short to medium term. Perhaps during pullbacks, because we do not want to be entering trades, for example, the two pairs in question, which under any other circumstances than the current coronavirus outbreak, might be considered to be oversold.