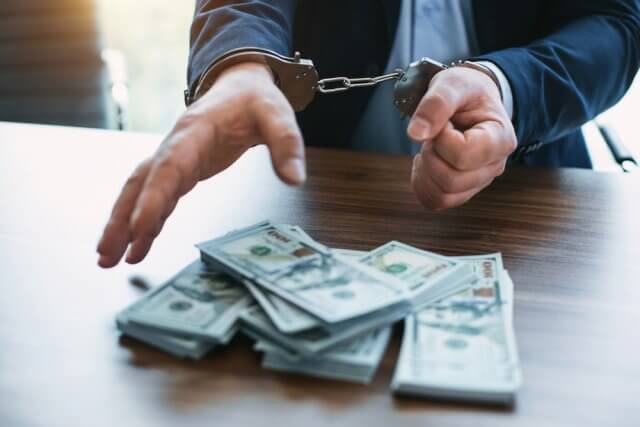 Corruption can very well be defined as seeking private gain through abuse of power that one has been entrusted. The biting effects of corruptions include:

So, how does this affect a country’s currency valuation? Well, through GDP, of course! This correlation is explained in detail later on in this article.

The CPI is used to rate the countries based on perceived levels of corruption on a sliding scale from 0 to 100. A score of 0 is considered the most corrupt. A country with a score of 100 is considered to be clean of corruption. The CPI is constructed based on the opinions of business executives, public policy experts, financial journalists, and risk analysts globally. 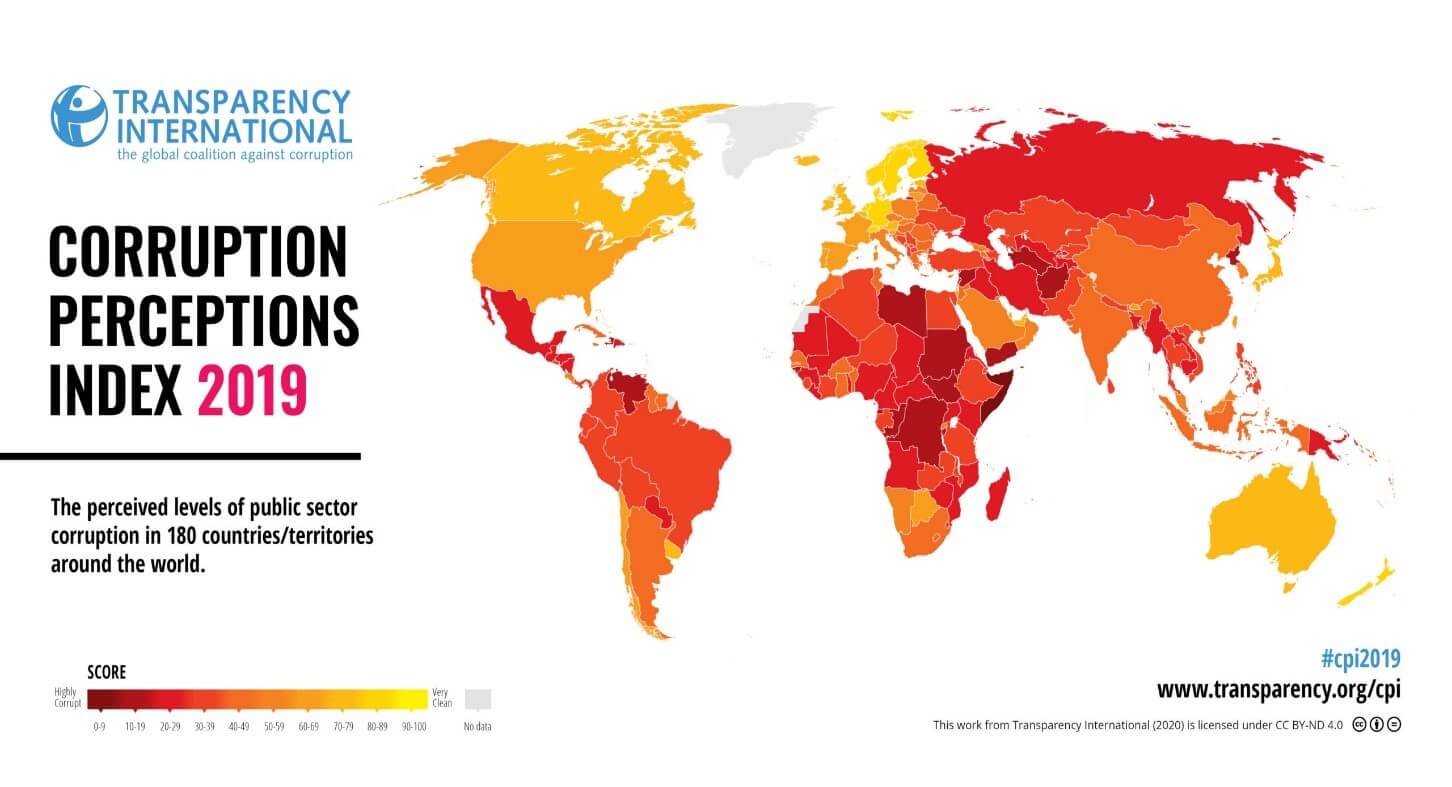 The CPI is a result of 13 rigorous assessments and surveys on wide-ranging issues on corruption collated by several reputable institutions around the world, including the World Bank and African Development Bank. These assessments and surveys are conducted in the two years preceding the publication. They incorporate a combination of qualitative and quantitative analysis which captures the manifestations of corruption, including:

How Corruption Rank Impacts the Economy

Corruption inherently impacts the economy negatively. A specific study by the World Bank shows that the GDP per capita in countries with low CPI is about 60% less than for countries with a higher CPI. The negative effects of corruption are:

Corruption results in a significant leakage in the budget. A country is thus forced to rely on debt, usually denominated in foreign currency. The interest payment leads to a higher share of revenue allocated to repayment in the short term instead of economic investments. This higher share of foreign borrowing also results in the local currency crisis.

Inefficiencies in the allocation of resources

Through bribery, the allocation of tenders is usually awarded to individuals and firms who are not qualified. As a result, most public projects are not completed, and the benefits to the economy foregone.

Creation of a shadow economy

Corruption facilitates the growth of several firms that avoid official registrations. As a result, the economy experiences a deficit in terms of taxation, import, and export duties payable. Consequently resulting in low GDP.

The exit of investors

Corruption leads to investors pulling their businesses out. This exit leads to reduced economic activities and accompanied by job losses.

Foreign investors often shun countries with rampant corruption since they seek a fair operating environment. Donor agencies such as IMF and World Bank also reduce their total outflows into such countries. Therefore, the recipient countries’ economy fails to benefit from such investments, which would have a multiplier effect within the economy. Also, because FDI is usually denominated in foreign currency, it usually boosts the recipient countries’ currency strength.

Corrupt countries offer very little protection in terms of patents and copyright protection. The lack of legal protection framework results in massive exportation of technology from such countries, thus denying the local economies the growth benefits.

Corruption creates a disincentive to invest in the local manufacturing and production industries. Apart from the drop in job creations, this leads to overreliance on importation to fill the local demand.

Consequently, a change in the corruption ranking is often accompanied by a corresponding change in the country’s GDP. In 2019, Sweden dropped in ranking from position 3 to position 4; this was coincided by a 6.37% drop in its annual GDP. During the same period, Malaysia ranked position 51 from 61, a period which coincided with a 1.68% annual GDP growth. 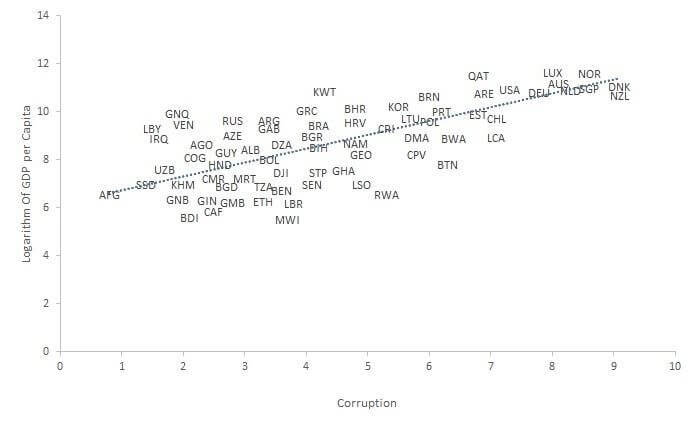 How Corruption Rank Impacts a Currency

High levels of corruption typically tend to be accompanied by a deteriorating economy. It is a known fact that the strength and fluctuation of a country’s currency are tied to its economic performance. Therefore, this is accompanied by a reduction in the valuation of the currency in the forex market.

Any improvements in the rank could forebode that the economy has been performing better, which will be accompanied by a significant appreciation in the country’s currency. Conversely, a drop in the corruption rankings signifies a deterioration in the economic conditions, which will result in the long-term changes in the currency’s value.

The corruption rank published annually by Transparency International rarely moves the forex market. It is, however vital for the forex traders to keep an eye out for CPI rank. As we have already discussed in this article, the CPI provides crucial information about the conditions of the underlying fundamentals of a country’s economy. The corruption rank is released annually following a two-year assessment and analysis. The latest CPI data for 2019 ranking 198 countries was released on January 23, 2020. A highlight of the release can be found on the Transparency International’s website.

Below is a snapshot of the top and bottom performers. The legend indicates the level of corruption in the country.

In 209, the US fell in rankings by one position, from 22 to 23 out of the 198 countries that were ranked. The screengrab below shows this position.

For long-term traders, the pattern offers a great opportunity to go short on the above pairs, since the prevailing downtrends would favor them. Let’s now see how the price responded to the release of the corruption rank by Transparency International.

However, against the AUD, the USD can be observed to have weakened momentarily. The pair later regained its bullish trends. It is worth noting that the momentary strength in the AUD is because Australia performed better in the corruption ranking by climbing one position, as shown by the snapshot below.

The chart below shows the daily price action of the AUD/USD pair after the news release.

The USD weakened against the NZD after the release of the corruption ranking. This weakness can be attributed to the fact that New Zealand ranked first with a score of 87. This ranking is shown by the screengrab below.

As can be seen on the daily chart below, USD weakened against the NZD after the news release.

Corruption rank can be seen to have some mild effects on the price action of the selected pairs, but not enough to alter to the trend observed before its release. Although most forex traders rarely observe it due to the annual nature of its release, corruption rank provides vital information about the underlying fundamentals of an economy. All the best!