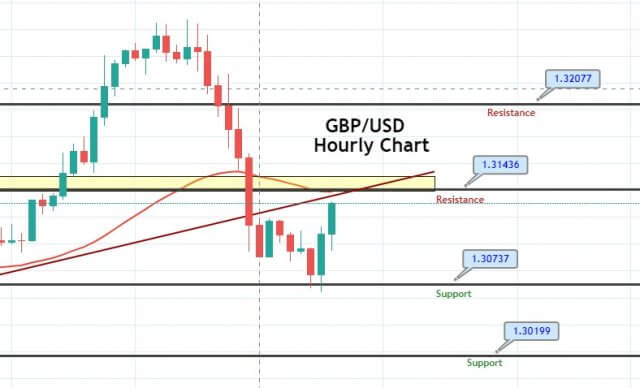 Today in the early European trading hours, the GBP/USD currency pair failed to stop its previous session declining streak and took further offer below the 1.3100 level while represented 0.15% losses on the day mainly due broad-based U.S. dollar on-going strength. On the other hand, the reason behind the currency pair declines could also be associated with the coronavirus woes. The rising Brexit uncertainty also joined the on-going pessimism around the Cable and contributed to the currency pair losses. In the meantime, the reports that more than two years would be needed to reach pre-pandemic U.K. economy size also weighed on the Cable. At this particular time, the GBP/USD currency pair is currently trading at 1.3089 and consolidating in the range between 1.3064 – 1.3119.

At the Brexit front, the 7th-round of Brexit talks seemed to have collapsed without giving any clue over the tough issues like fisheries and a level playing. However, the reason could be associated with the latest disagreements over the U.K. truckers’ access to Europe. This, in turn, kept the traders cautious.

Also weighing on the quote could be the latest report that the U.K. economy will not fully recover from its on-going historic downturn for at least two years. Thus, there are little chances that the BOE will use negative interest rates to boost the upswing.

However, the downbeat trading sentiment could be attributed to the US-China, and Washington-Iran tussle. As per the latest report, the U.S. President Donald Trump urged to restore the U.N. sanctions on Iran. The Secretary of State Mike Pompeo also warned that the U.S. would hold Russia and China accountable if they even try to interfere in the Iran issue.

Furthermore, the intensifying tensions between the U.S. and China also added a burden around the market trading sentiment. It is worth reporting that the U.S. President Donald Trump suspended the trade talks with China while White House Chief of Staff Mark Meadows confirmed that the trade talks would not happen soon. However, these lingering Sino-US tensions kept the equity market under pressure and gave the broad-based U.S. dollar a safe haven status.

As a result, the broad-based U.S. dollar flashed green and took the safe-haven bids on the day amid market risk-off sentiment. However, the U.S. dollar gains could also be associated with the U.S. Federal Reserve’s recent report, which pushed the U.S. Treasury yields higher and helped the U.S. dollar further.

Looking forward, the market traders will keep their eyes on the U.S. Jobless Claims, Philly Fed Manufacturing Survey, and the European Central Bank (ECB) policy meeting minutes, which will release later today. As well as, the headlines concerning the US COVID-19 aid package, virus figures, and Sino-American trade can also impact the pair’s movement.


We opened a sell signal in the GBP/USD pair as the pair broke below an upward trendline, which was supporting the pair at 1.3130 level. Closing of candles below this level was confirming the odds of selling bias in the market, but the pair started to reverse back before hitting our take profit. The recent bullish engulfing suggests bullish trend continuation, and it may lead to the GBP/USD prices until the 1.3135 resistance level. But until then, our signal won’t survive as our stop loss was 1.3124. Let’s close it manually now and wait for another trade setup. Good luck!