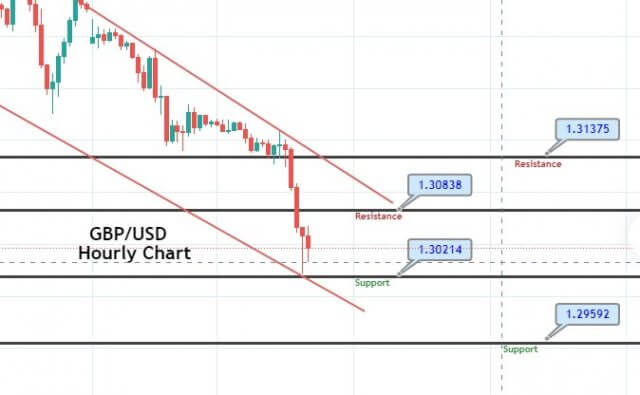 During Tuesday’s European trading session, the GBP/USD currency pair failed to stop its previous day bearish moves and dropped further to a multi-week low near below the 1.3050 level while represented 0.113% losses on the day mainly due broad-based U.S. dollar ongoing strength, backed by high safe-haven demand.

On the other hand, the reason behind the currency pair declines could also be associated with the rising fears of a no-deal Brexit, which joined the Cable’s ongoing pessimism and contributed to the currency pair losses. The rising coronavirus cases in the U.K. also add downside pressure around the currency pair. At this particular time, the GBP/USD currency pair is currently trading at 1.3051 and consolidating in the range between 1.3023 – 1.3174.

The U.K.’s Environment Secretary George Eustice declined chatters surrounding significant changes in the Brexit agreement, while the E.U. diplomat Michael Barnier recently showed a willingness to leave the trade negotiations. On the other hand, Ireland’s Foreign Minister advised traders to not overreact to the news that the Tories may seek to weaken the Brexit withdrawal agreement. In the meantime, the Irish diplomat warned the Boris Johnson and Company over any such action. In turn, this raised the fears of further losses to the British funds after seeing a record outflow of $1.6 billion in three months to August amid such pessimism.

Also fueling the concerns was the report that the Head of the U.K. Government’s legal department, Jonathan Jones, resigned from his dissatisfaction concerning the overall Brexit situation. It is worth mentioning that Jones is the 6th-senior U.K. government official to resign this year, which increases the ongoing uncertainty over the political scene. This, in turn, undermined the British Pond and extended the currency pair losses.

Moreover, Germany’s Finance Minister Olaf Scholz stated that London’s latest signals do not raise hopes for a Brexit agreement. However, these downbeat comments from Scholzfurther fueled the uncertainty around the Brexit agreement. At the coronavirus front, the U.K.’s coronavirus (COVID-19) cases eased from the highest since May of 2,988 to 2,948 while eased the virus-led restrictions from Northern England. Moreover, BOE’s Chief Economist Andy Haldane appreciated the U.K. recovery from the virus-hit times and pushed for the furlough scheme’s end. However, these positive headlines failed to reduce the ongoing bearish tone around the currency pair.

As in result, the broad-based U.S. dollar flashed green and took the safe-haven bids on the day amid market risk-off sentiment. However, the U.S. dollar gains could also be associated with the upbeat U.S. labor market report, which showed a decline in the unemployment rate. Thus, the gains in the U.S. dollar kept the currency pair under pressure. Whereas, the U.S. Dollar Index, which tracks the greenback against a basket of other currencies, rose by 0.13% to 93.168 by 9:53 PM ET (2:53 AM GMT).


Looking forward, the market traders will keep their eyes on the Brexit talks. The risk catalyst like geopolitics and the virus woes will be key to watch for the fresh direction, not to forget the Brexit. The GBP/USD is trading within a downward channel extending resistance at 1.3137 level and a support level of 1.3020 level. Violation of 1.3021 level may drive the selling trend until the next support level of 1.2959 level. Well, we are already out of the trade as our forex trading signal at taking profit at 1.30917, securing us 40 green pips. Let’s brace for profit-taking before taking selling trade below 1.3085 level. Good luck!